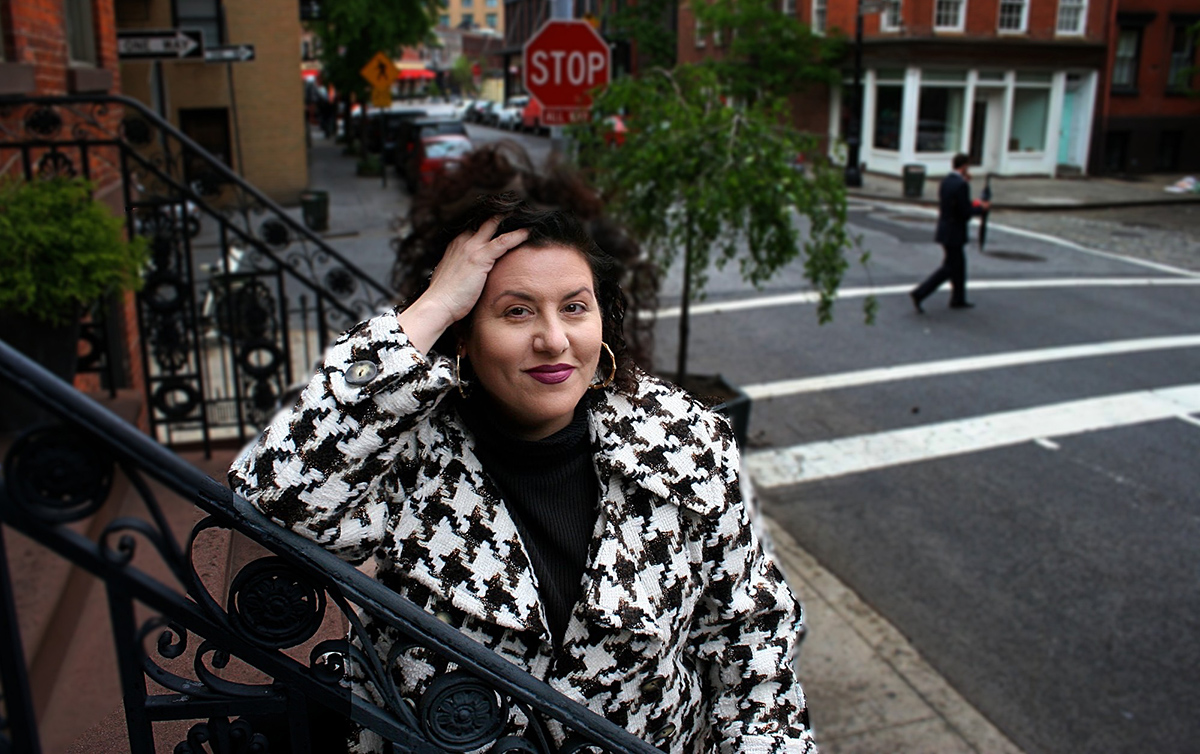 “Expose yourself to what is beautiful about this world.”

Early on in her writing career, Adriana worked on A Different World, a popular sitcom that aired for six seasons in the late 80s and early 90s. This is where she learned three lessons as a young writer: make your deadline, be persistent and have a message. “You got to know who you are and what you’re writing about,” she explains. “You have to have a sense of clarity about your message and that leads to excellence.” Because Adriana has lent her talents to film and television, she understands who is “king” in each medium. The writer is king in television while the director is king in film.

Giving insight into her creative process, Adriana Trigiani sees herself as a writer who takes it day by day. “There are people who will create one thing that is perfect,” she says. “Then there are people like me who are workaday journeymen who have to keep working at it to get better.” She finds it impossible to be sitting at a desk writing a novel for long periods of time. She says she may come up with an idea or do research for long periods of time, but once she starts to write, it is off to the races. “I could not be entertained by something for 10 years on a daily basis,” she says. “I could not be engaged in that because I would be focusing on one thing for too long.” 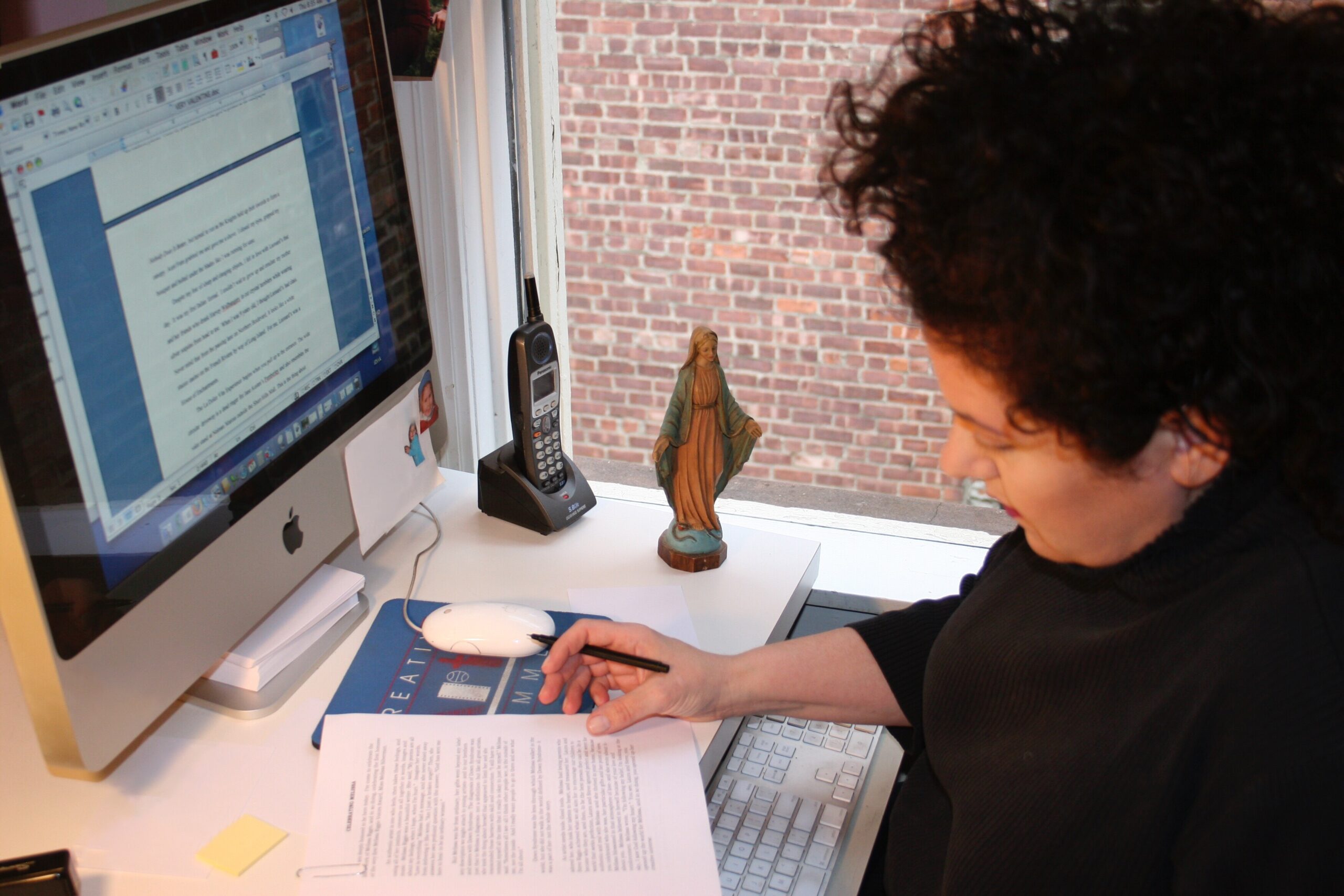 Writing and directing the film Big Stone Gap, based on her novel of the same name, holds a special place in her heart. “We filmed in my hometown. I’m not going to tell you for one second that it was easy,” she says. “It was very hard but joyful.” She admits working with a crew and different personalities were part of that difficulty. Sometimes you just don’t get along. But Adriana knows how to stay focused on what’s important. “You can’t let them get to you. You just have to roll over them and keep it moving,” she says jokingly. “You continue to work with the people you love and stop working with the people you don’t.” She understands all working relationships aren’t equal. “Learn to work with people who will appreciate your gifts,” she says. “Maybe I didn’t?”

Even though Adriana lives in New York City now, she still finds similarities between the big city and the place she grew up. “I lived here most of my life,” she says. “The neighborhoods are like small towns.” Even though there are similarities, Big Stone Gap has an edge over New York City for Adriana. “I always said that if you want to understand street smarts, then come to Big Stone Gap, don’t come to New York City,” she asserts. “They are sharp as tacks where I’m from and they know what they are talking about.” With that being said, she does appreciate the diversity of New York City. “There is every color, nationality, and gender. We got it and we flaunt it,” Adriana says proudly.

“I would argue in the United States of America, we still have not had that watershed moment for black people and other people of color.”

Back when Adriana was a theater major at Saint Mary’s College in South Bend, Indiana, she learned what it takes to put on a production. Anything can happen and you must know what avenues to take to keep it going. She applies this early lesson to her directing. “I got excellent training but all training does is reinforce what you might do,” Adriana says. Adriana explains the perspective you must have when creating a film. “You have to have a very visual sense of the world,” she explains. In order to be successful, you also have to be flexible. “Yes, it’s all about experience but it has to do with your flexibility as a creator. You can’t get calcified in your thought process ever. You have to be open and you have to listen to your audience.”

Adriana also focuses on the business side of the entertainment industry and how you must be on your p’s and q’s. “You have to know when people are playing you. That’s on the money side,” she says. You also have to be resourceful. “You are going to have to figure out why a certain costume didn’t show up on set or where to find the money if the person raising the money cannot find it,” she says.

While xenophobia, racial bias, diversity and inclusion, in general, come up in our discussion surrounding media and America, Adriana is also reminded of the prejudice and discrimination Italian-Americans experienced in the first half of the 20th century. She acknowledges Italians who migrated to America were not always welcomed, especially before World War II (WWII). “Prior to WWII, no white person ate spaghetti above 14th Street in New York City,” she says. “Nobody mingled with the Italians. The Italians were persona non grata. We were associated with crime and this and that.” Things soon changed when Italian Americans began to be more visible in the media after WWII. Beacons like Sophia Loren, the Italian haircut and the rise of people and groups like Vic Damone, Frankie Valli, the Four Seasons, and Dion and the Belmonts helped to change minds about Italians in America. 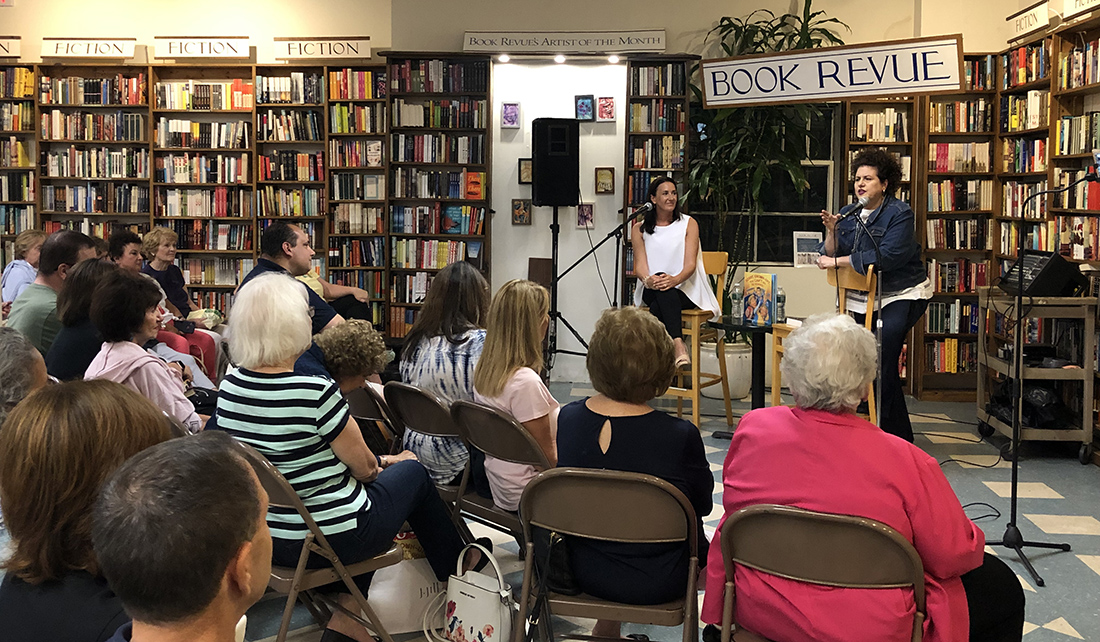 Adriana also gives credit to the draft during WWII for ushering in a newfound acceptance of Italians. “All of these young men—the rich, poor, and the in-between . . . had to go fight,” she says. “You had Christians, Jews, and Muslims fighting for a united cause.” As they were stationed in Italy and began to eat the food, the threat of the Italian-American began to dwindle. “When they returned, they were busting over to 14th street to go to Little Italy to eat. It became a thing,” she says. Italian culture was now mainstream. She reminds us of the canned spaghetti and meatballs called Chef Boyardee created by Hector Boiardi becoming a popular choice for supper in American homes. She says this moment has yet to happen for other ethnic groups, particularly black people. “I would argue in the United States of America, we still have not had that watershed moment for black people and other people of color.” But she believes that moment is coming soon.

Adriana reflects more about identity and race. She recalls attending Diahann Carroll’s memorial service. She heard Lenny Kravitz give his speech honoring her and talking about her being like family. But what stood out for Adriana was how he mentioned his mother and the influence she had over him. His speech made her think about identity and being proud of who you are. She says in order to be proud of who you are, you have to be proud of what you have accomplished. For people of color to be liberated, their accomplishments must be addressed by those in power. But with that acknowledgment comes a sense of responsibility for past wrongs. “It is a consequence to tell people the truth about our history,” she explains. “We got to tell the stories. That’s important and they have to be repeated and they have to be in our school books.”

“Learn to work with people who will appreciate your gifts.”

Adriana has a few creators and writers that she really admires and would love to work with. Writer/actress/producer Lena Waithe is the first person that comes to mind.“She has a new show called Twenties on BET. A beautiful woman of color named Susan Fales-Hill is her show-runner,” she says. “Lena Waithe is just putting a lot of great product out there.” She also mentions the novelist Lauren Groff (Fates and Furies) and poet Ben Lerner. “I think he’s terrific,” she says. She also mentions Jean Kwok (Searching for Sylvie Lee: A Novel—a mystery identity novel). “She grew up in Brooklyn, worked in a factory and went to school at the same time. I think she’s fantastic,” she says. Nodding to our previous discussion about diversity she says, “There’s some color up in there.”

For young writers, she suggests to simply start putting pen to paper. “How do you do it? Write something every day and what will emerge is the kind of writing you will be doing,” she says. “Maybe you like to research and write about what you have found. Maybe you’re a non-fiction writer or a poet. If the pages are filled with dialogue, then you may be the next great playwright. Now get into the theater!”

“Things will never be the same. It will be an adjustment, but change does not always mean misfortune.”

Her message for parents is simple as well: Expose your children to culture and the arts. “For your children who you think are creative, take them to museums, shows, and to plays. It doesn’t matter what they see specifically, just take them,” she says. “Let them see the world on the stage. Take them to concerts and expose them to all kinds of music even if they think they hate it. It’s nothing like taking a kid to opera. They will be either mesmerized or bored, but there will be something.”

She says all of these art forms are available in communities, you just have to look. She also mentions the importance of reading and taking children to the library. “Make reading a pleasurable experience for kids. Let them read actual books,” she says. “Take away that iPad for a little bit.” She emphasizes children who read or who are read to are more successful in adulthood. She also says we must reexamine the accessibility of thought-provoking literature, journalism, and new ideas. “You turn off man, woman, and child when you try to get them to do something that’s drudgery. We got to bring them in the best way we can,” she suggests. 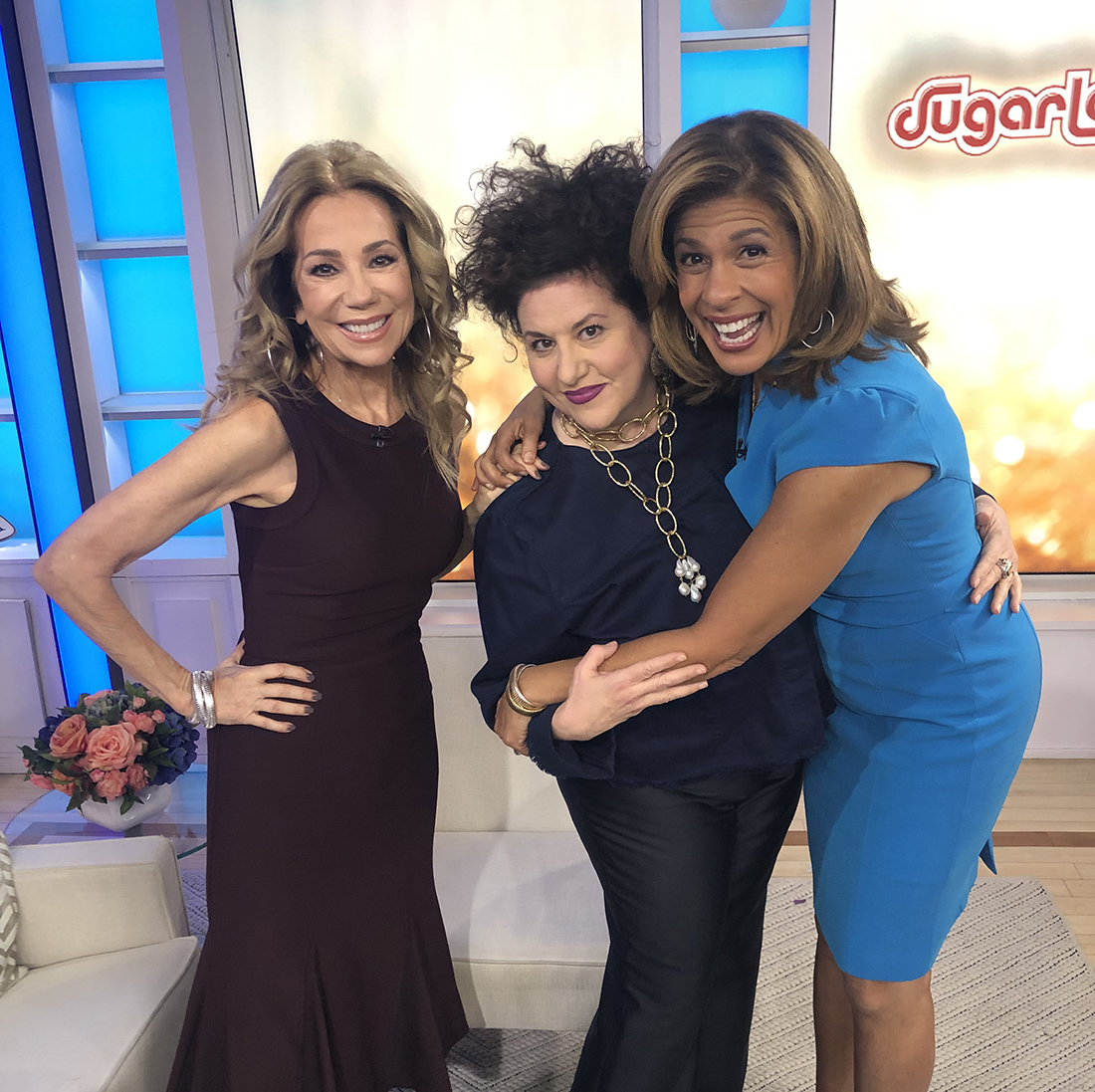 Adriana will be directing a film written by and starring Kathie Lee Gifford. Craig Ferguson will also star. She also is finishing a new book to be released next year. She says she’s looking forward to the fall season and the possibility of change. “I’m looking forward to this ongoing change of life where we are learning and growing and doing what needs to be done to make the world a better place,” she says. “I don’t think it is time for doom and gloom. I think it is time for action.” We conducted this interview before COVID-19. As we work our way through this global pandemic, her words are more prescient than ever. “Things will never be the same. It will be an adjustment, but change does not always mean misfortune.” Adriana’s words ring more urgent now than when they were first uttered to SoulVision Magazine a few months ago. We must take action to change our world for the better. We have the power to make change a good thing. Thank you, Adriana, for doing your part.