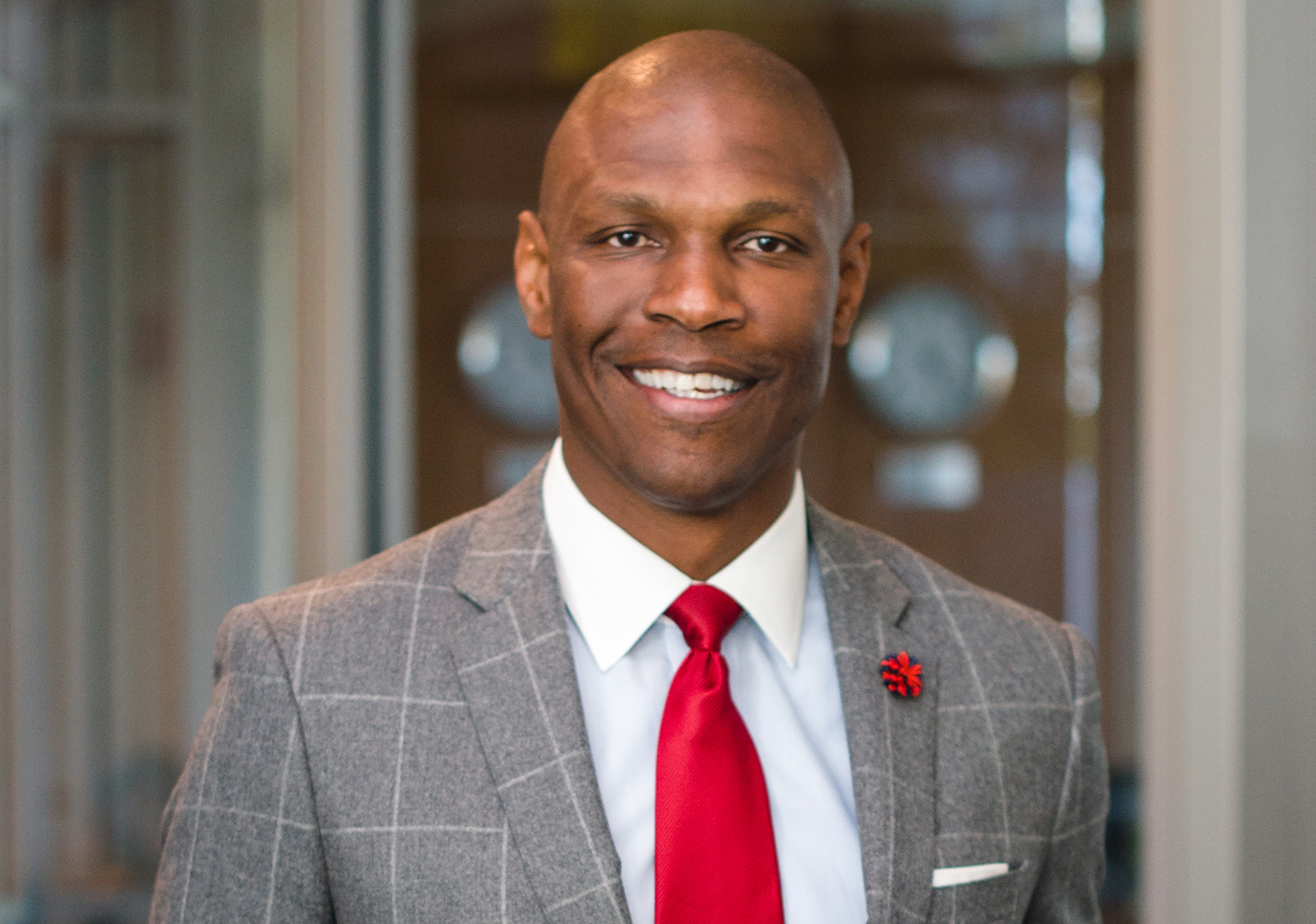 Chris Howard’s story began in Plano, Texas, where he experienced the difficulties of being one of a few black people in a predominantly white neighborhood. Chris recalls moving from Little Rock, Arkansas to Plano, Texas, and walking into his fourth-grade classroom. The school was modern for its time. There were no walls, so you could see into the next classroom. He was the only black student in his entire fourth-grade class. It was easy for young Chris Howard to feel alone in a sea of faces that did not look like him. At some point, he realized he was not as academically prepared as his classmates. The reality of inequality settled in. He became the stereotypical young angry black boy. “1979 Plano, Texas, was not a place where white people were politically correct and understood sensitivities around black people,” Chris explains. “So hearing the n-word, not necessarily thrown at me, but just hearing it on the playground affected me negatively. I got into lots of fights.”

When he reached middle school, he began to understand how he could amend his past transgressions. “In Texas, all sins can be forgiven if you can play football,” he says jokingly. He was a great football player. He caught up academically and continued to work hard. By the time he had graduated Plano Senior High School, he was student body president, the cadet colonel commander of his ROTC battalion, and captain of his football team. “It was a journey from fourth to twelfth grade,” he recalls. “There was a lot of blood, sweat, and tears from all parties involved but by the end of it, they are people who I absolutely learned to love like they were my own kinfolk.” Chris went on to graduate from the United States Air Force Academy, earning a BS degree in political science. He received the Campbell Trophy for his stellar academic and football performance. He then was named a Rhodes Scholar and earned his doctorate in politics at the University of Oxford and an MBA with distinction from the Harvard Business School. 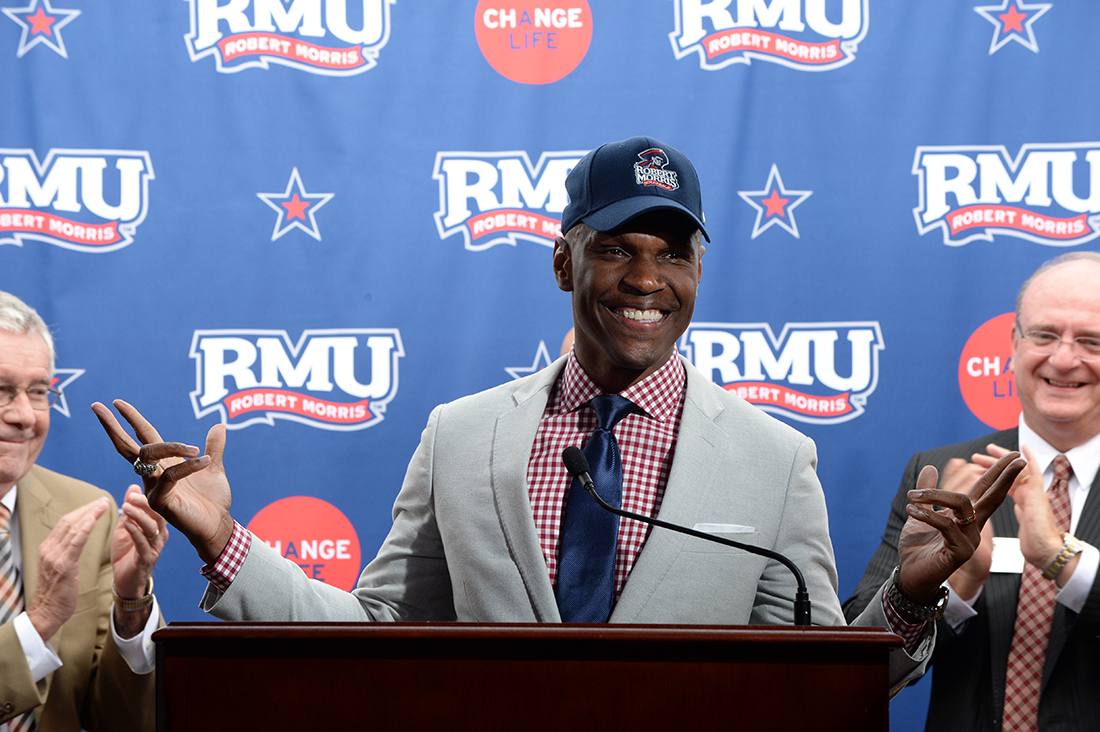 Chris Howard believes that his family history holds the clues to how he landed where he is today. His parents’ humble beginnings started in Texas. They both grew up picking cotton; black people were not permitted to work in stores. His mom, Caroline, who was his biggest inspiration, grew up with no indoor plumbing and, for a portion of her freshman year in high school, no electricity. Notwithstanding all of this, his mom was valedictorian of her high school and his dad was salutatorian at his. His parents met at Prairie View A&M University. While his dad graduated, his mom left school after they were married and went back to school off and on. She ultimately graduated from college the same year his older brother graduated high school. Throughout his years as a youth, while he was going to school, she was too. He saw his mom sacrifice and work hard and diligently to make a great life for him and his brother. Caroline graduated cum laude from the University of Texas at Dallas.

He saw how active she was in the community and the barriers she broke down. She was treasurer and head of the PTA at his high school and helped elect the first African-American City Council member of Plano, Texas. Yet, she was still at every band performance, football game, and track meet. He remembers the time his mom had gotten a C+ in one of her classes as a student at the University of Texas at Dallas. “She said to me, ‘I got a C+ in this class. I am so happy. I worked so hard to get this C+,’ Chris says. “It was the only C+ she had ever made. She had made all As and Bs throughout her collegiate career. But I thought to myself, what a great example for me to see this strong black woman who emphasized that if you worked hard and tried your best, you should be proud of that.”

“I think people enjoy the most success when they do the things they do best.”

Chris Howard loves the quote attributed to Mark Twain, “The two most important days of your life are the day you are born and the day you find out why.” For Chris, that moment arrived when he became president of Hampden-Sydney College in Virginia around 2009. Sure, at that point in his life he had work experience in the military, corporate America, intelligence, and the nonprofit space, but he didn’t feel those opportunities were his purpose. “When I got into this college presidency thing, it was challenging,” he explains. “Then I started to think that this is challenging but rewarding. I’m giving back. I think people enjoy the most success when they do the things they do best.”

Chris is an outlier in the pool of university presidents. “The average school president is a 61-year-old white male. I’m 51 and I’ve been president for over a decade,” he explains. But he declares that the title or accolades are not what’s most important. What is most important is that he feels he is doing something meaningful. Chris considers his greatest achievement to be raising his two sons Cohen and Joshua Howard with his wife, Barbara, a native of Johannesburg, South Africa, who grew up under the Apartheid system. “These are the kind of young men who you would want to have sitting at your table,” he says of his two sons. He tells his sons that regardless of who you are or what you’ve achieved, you should always be respectful. “You don’t have to be a Rhodes Scholar to be respectful,” Chris says. “You don’t have to be a graduate of Harvard Business School to appreciate other people and what they do in their struggle. I’m very proud of who they are and who they have grown to be.”

When asked how he manages to do so much, he says he is inspired by his ancestors who were born into slavery. He cites being just three generations removed from chattel slavery. “My great-great-grandfather Amos Howard was a slave,” he explains. “I’ve been given a lot, so I must give. That motivates me. This history is not lost on the opportunities that I’ve been able to seize.” 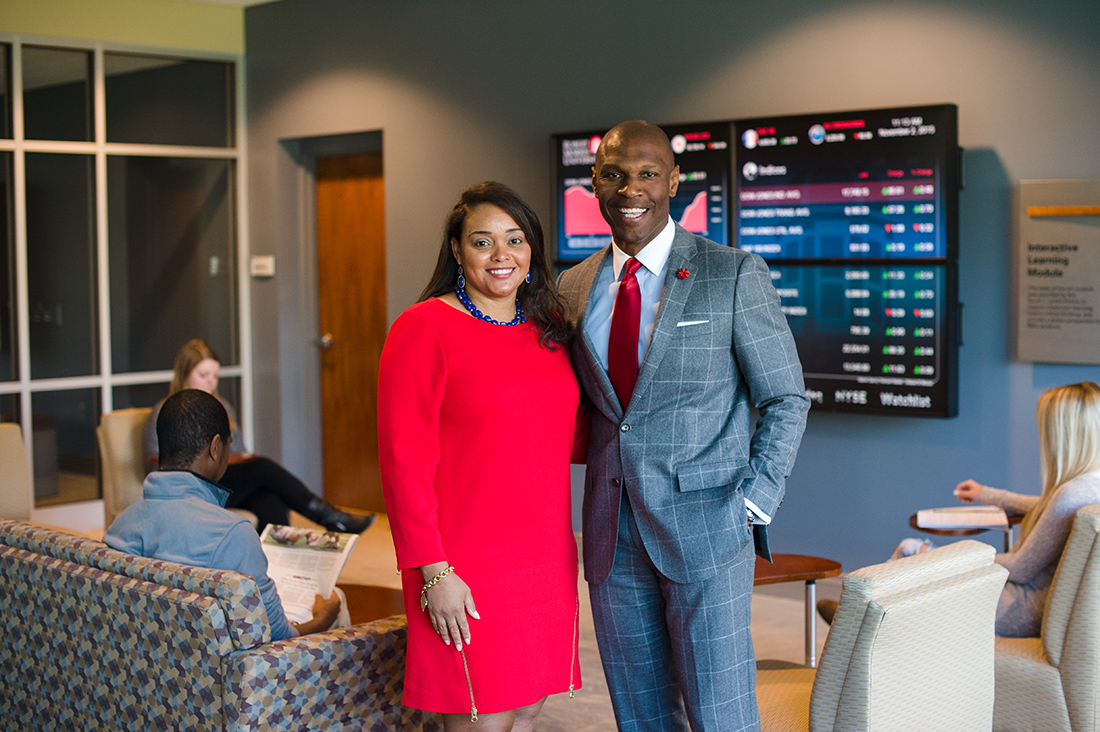 Chris is also motivated by his parents’ characteristic of standing by their word. “My mom and dad were not wishy-washy people,” he explains. “They did what they said they were going to do.” In his job, he holds everyone accountable. He goes through the mental process of understanding what they need and if they can accomplish what is in front of them. If they can both agree that it can be done, then he will hold them accountable. This is the same standard he holds himself to. “I understand the world is gray,” Chris says. “I understand that there are circumstances and issues, and I’m not inhumane, but I think as a leader if I can try my best to be transparent and fair and consistent, the organization will be successful.”

COVID-19 has put a strain on higher education. He believes he has a capable team that will get the university through a tough and uncertain time. There is his nine-member cabinet that reports directly to him. Then there is the leadership council and a board of trustees. “We are like a battle-hardened combat team that is going on into the next fight with the hindsight of being successful in the previous battle,” he explains. He references Jim Collins and his book Good to Great. In the book, Collins explains that in hardships, you have to be pragmatic and realistic at the same time. Chris Howard and his team have made the decision to reopen their campus for the fall semester with the option for students to have the comfort of taking their classes online or in-person.

“You don’t have to be a graduate of Harvard Business School to appreciate other people and what they do in their struggle.”

We asked Chris what advice he would give to someone who would like to follow a similar path. He humorously responds, “Are you crazy? Are you sure you want to do this?” He then reframes his answer. “In all seriousness, it is a magnificent honor and—as they call it in the military—the covenant of a command,” he says. “To be the chief empowerment officer, to be able to help people, students, staff, alumni, friends of the university achieve their hopes and dreams and aspirations is a real honor.” Chris makes it clear that being a school president can be a “thankless” job, so if one is okay with that then they are perfect for the job. While Chris took a non-traditional route to his position, the traditional route consists of moving through the academic ranks. “There is plenty of need here. We touch every aspect of the human condition in civil society. If you really want to make a difference in the world, take a look at it,” he encourages.

Chris Howard makes it a priority to take care of his mental and physical health. “I try to keep my weight within 5 pounds of what my fighting weight was,” he says. “That’s how I calibrate how I’m taking care of myself because quite often the stress is greatest when you think you don’t eat right, don’t exercise, or hydrate.” Chris is aware of the immense responsibility leaders have on the success of the organization. “When you move up in leadership roles you actually lose grip of what you can control, but you’re responsible for so much more,” Chris says. “You recognize as a leader, you cannot do everything by yourself. It requires working through others to get things done and that can be really scary.” 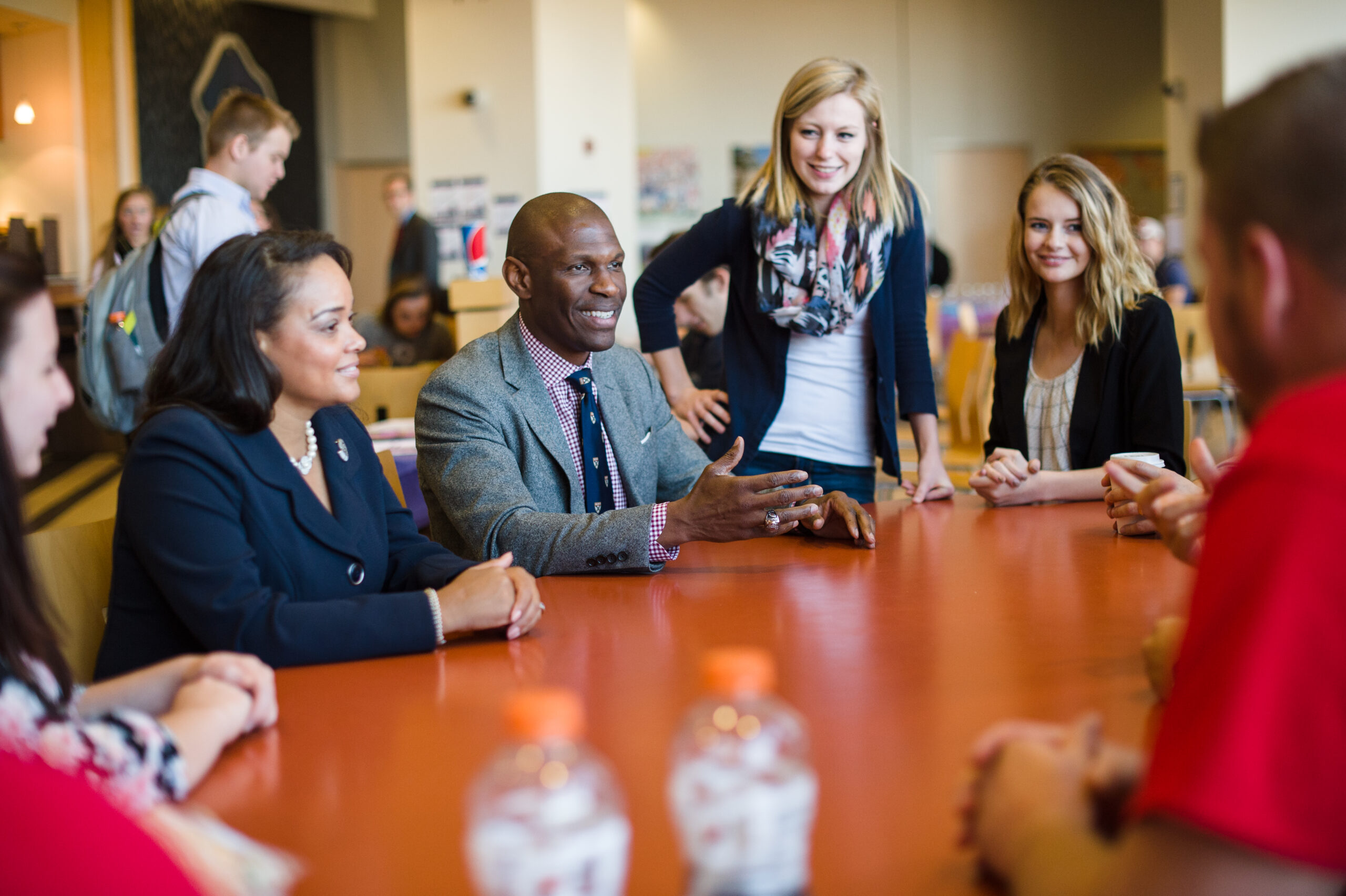 Chris and Barbara Howard meet with students at RMU’s RoMo’s Cafe at its Moon Township campus. Photo by Michael Will.

He recalls a meeting with his cabinet earlier this year. It was when the coronavirus was fairly new. He recommended focusing on what they can control. He explained that they could control staying fit, keeping up with dental hygiene, putting on sunblock, and staying hydrated. As he explains, all of these things were “good for them” and in their control. “It’s a metaphor,” he explains. “There are other things you can control in terms of your work schedule, discipline, attentiveness, how you run meetings. You have to distill it down to what you can control and do your best to be understanding that there are going to be things beyond your control and be at peace with that.” As a leader, Chris recognizes it is his ultimate responsibility to revolve his work around empowering his team and the people he serves.

After a long discussion, Chris notes that he is proud to be the president of Robert Morris University. “We turn 100 in 2021 and I’m excited to see what we are going to be in the next 100 years,” he says. “I’m excited about the arc and journey of the institution that I’m leading in a region like Pittsburgh which is very much a microcosm of society—medicine, technology, education, and very blue and red politically. Being a part of that and that vibrancy is going to dictate where our country is going to go in the future. I’m very excited to be on this ride.”