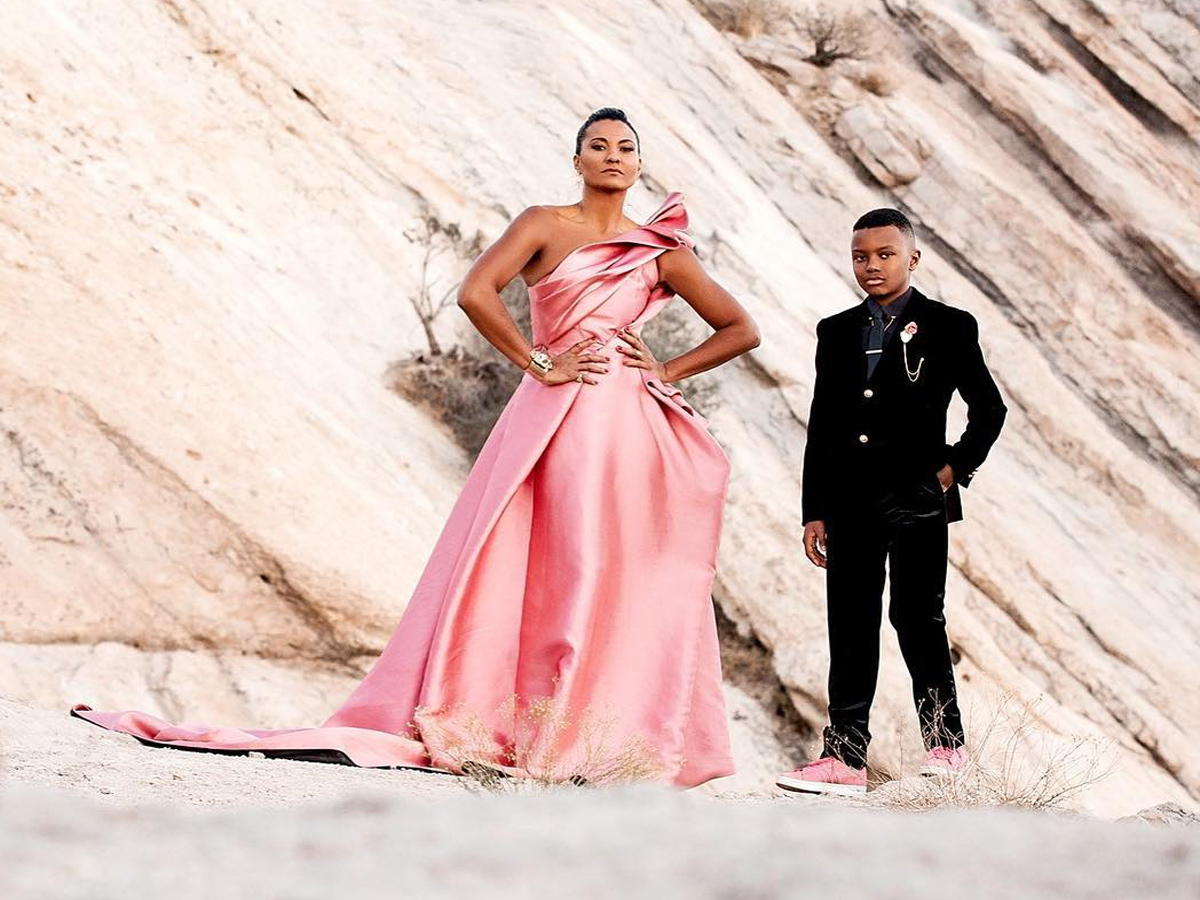 Christine Simmons with her son Christian. Photos by April Johnston.

“You don’t have to work within the system.”

In Rancho Cucamonga, a suburban city in San Bernardino County, California, Christine Simmons’s mother raised her and her three sisters as a single mother. Her mother was independent, strong, and had all the love in the world to give her girls. “I watched her make the impossible possible without the help, raising us while working three or four jobs at a time,” Christine says. “She did that for us and still does to this day. Even in retirement, she is the strength of our family. Because of her, we evolved into the women that we are today.” As chief operating officer of the Academy of Motion Pictures and Sciences, Christine Simmons is helping to evolve the structure of a nearly 100-year-old institution. 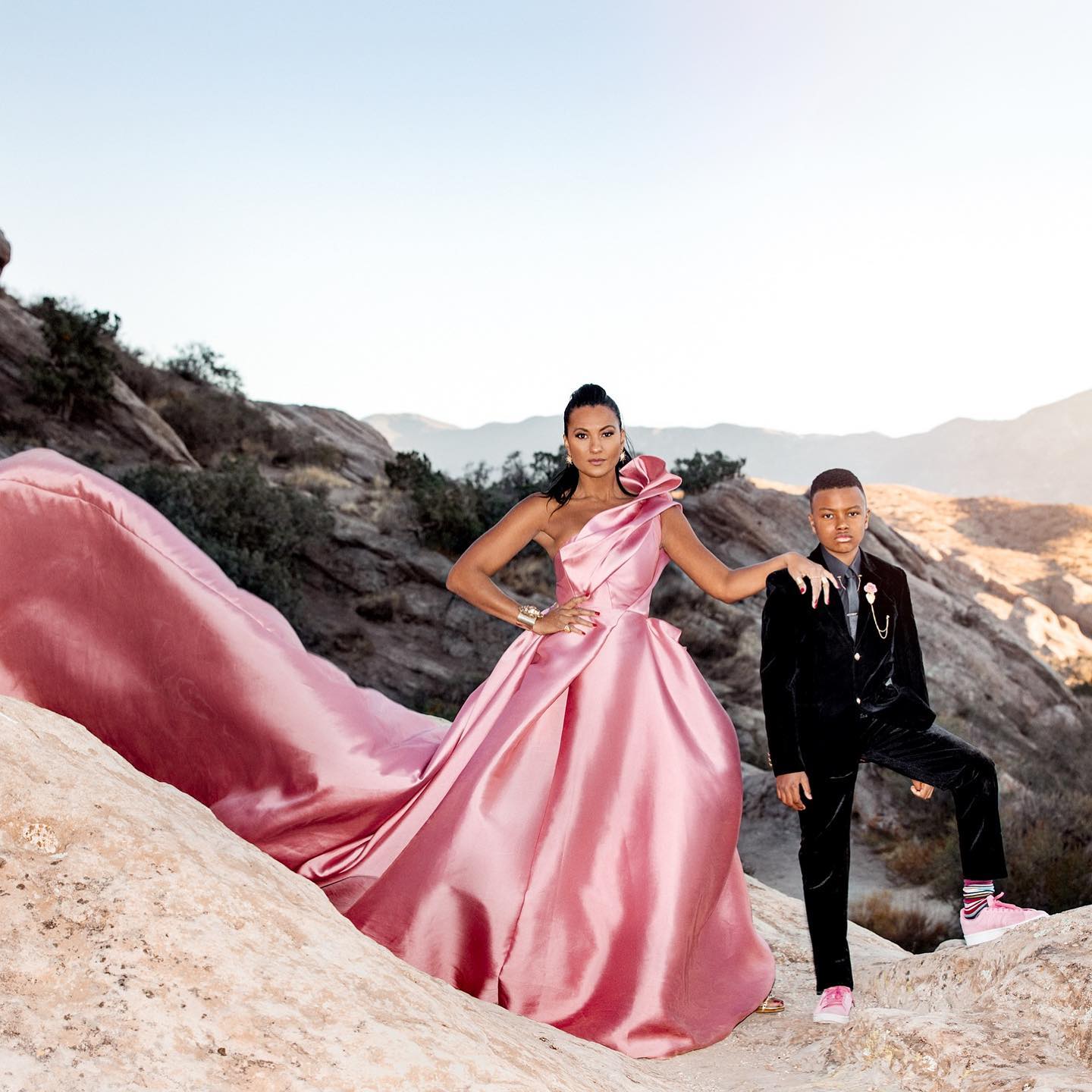 Christine is a big proponent for using your network of relationships for the greater good. She uses the term “social capital” to explain this critical social skill. When Christine had just graduated from UCLA, where she was pre-med, she met Los Angeles Lakers legend Earvin “Magic” Johnson. She asked Johnson about the health clinics he was beginning to open. They talked and found they had similar opinions about athletes and their transitions for making a living off the court. Christine and Johnson kept in touch and he became her mentor. “I checked in to see if he and his family were doing well over the years,” she says. When she was the supplier diversity & sustainability manager at Disney World, Christine helped Mr. Johnson gain the opportunity to compete for a contract for his foodservice and facilities maintenance company, SodexoMagic. “I came to the relationship with something to offer,” she says. “Even for someone as well regarded as Magic Johnson, it’s important to have something to offer.” He hired her to be vice president of strategic alliances for his company and eventually, executive vice president of Magic Johnson Enterprises. Social capital doesn’t necessarily mean networking with famous people. You can also call on your friends from college. “It is so important to nurture relationships with your peers who you are coming up with,” she says. “You keep nurturing these networks and social capital, so you can advance and be successful together. I think that is key, and this is how business has been for quite some time.”

“What people should or shouldn’t do in their careers is being challenged, and it is a beautiful thing to watch.”

Christine appreciates the direction popular culture is headed in. Mainstream culture has defined who can create, who can get funding, and who can get exposure. “We are now reconciling with our past, whether it be in film or society,” she says. “We are now breaking down the systemic infrastructure that has put people in these hierarchical positions that weren’t always necessarily merited.” The culture of work has changed as well. Employees are now venturing out on their own or moving from company to company for better opportunities. However, people looked at Christine funny when she moved from company to company, specifically after working in high-level positions. “People wondered why I didn’t just stay and collect a pension,” she says. “What people should or shouldn’t do in their careers is being challenged, and it is a beautiful thing to watch.”

After #OscarsSoWhite in 2015, the Academy created the A2020 initiative. The initiative addresses the criticism of the Academy’s lack of diversity in its nominations and voting process. The goal was to double the number of women and people of color in the Academy’s membership. Christine says they have met their goals and, in many ways, exceeded them. After the murder of George Floyd, Christine says the Academy doubled down on diversity and inclusion. To further its progress, the Academy created Aperture 2025 that details new standards for the film industry. “We chose the word aperture because we want to broaden the lens through which excellence is recognized,” she says. Aperture 2025 includes several internal strategies for the Academy that address inclusion issues. The Academy has made unconscious bias training mandatory for its board of governors, branch executive committee members, and staff. They are looking at their investment portfolio. They are looking at HR and marketing and red carpet press. “All of these are tangential things that we as an organization can do,” Christine says. “And that is on top of the talent, diversity, and development programs we have that are nurturing the next generation of filmmakers.” The Academy has also made it a priority to target these groups in their Academy Gold programs, “a global talent development and inclusion initiative.” 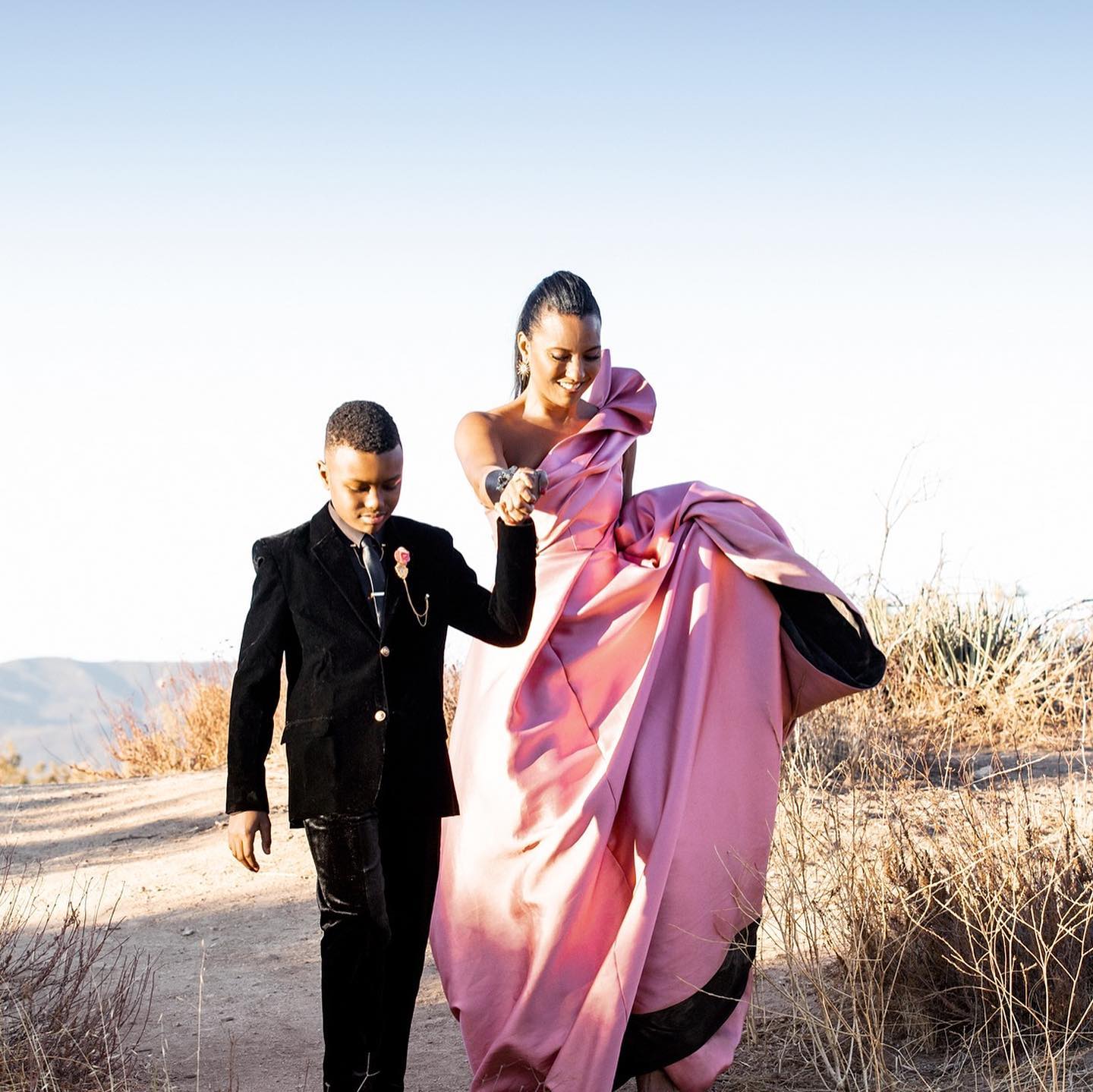 Aperture 2025’s most significant change is the new inclusion standards for Best Picture. The measures won’t go into full effect until around 2024. The inclusion standards center around four categories: in front of the camera, behind the camera, internship/training/work opportunities, and marketing/publicity/distribution. Hollywood studios must make sure they include underrepresented racial/ethnic and identity groups in these categories. “We still need to do a lot of work in the Latinx community, the LGBTQ community, and the Indigenous/Native populations as well,” Christine says. “These are all areas we have to shine a light on. There are so many beautiful and brilliant artists in these groups who deserve to be celebrated. We can do this and continue to lift our Asian and black brothers and sisters, women, and those with disabilities in the arts.” The Academy Museum of Motion Pictures opened in late September of this year. In 2022, Regeneration: Black Cinema 1898-1971 will explore African Americans’ history and their roles in cinema. “If you want to research the history of black cinema, you can do so in our library and our archives,” Christine says.

“If we can expose young men and women from all different backgrounds to all things that are possible, then you don’t have those limits that society teaches them.”

Advising those who would like to be in the industry, Christine recalls the advice of a colleague who suggested staying until the end of a film and watching the credits. Why? Because the end credits represent a giant listing of all of the jobs in the industry. “Some folks may want to be a studio exec, and that’s great, but some folks may love technology or coding,” she says. “Maybe they like dressing sets and location scouting. There are so many phenomenal opportunities for careers in film.” She also recommends internships. The Academy has its Gold Rising Program. This program includes internships with the Academy and production and media companies like Jordan Peele’s MonkeyPaw Productions and Warner Media. Christine recommends networking and getting on set for those who would like a career change. “You may have to take a step back and be ok with that if you feel that is where your passion is,” she says. Christine recommends that creatives just go for it, even if it is outside the traditional career path for filmmakers.  “Tyler Perry did it,” she says. “Ava DuVernay did it. Tons of folks are just starting out on their own. And that is beautiful too. You don’t have to work within the system.” She also suggests using iPhones to capture content. “Technology has helped democratize that a bit for us. Just do it and don’t ask for permission,” she says. When it is all said and done, Christine is excited about the Academy’s work. She wants people to know that they don’t have to be in Los Angeles to be part of the industry. “There are so many opportunities to meet our amazing members who are excited to welcome each new class of Academy members and create amazing movie magic together,” she says. 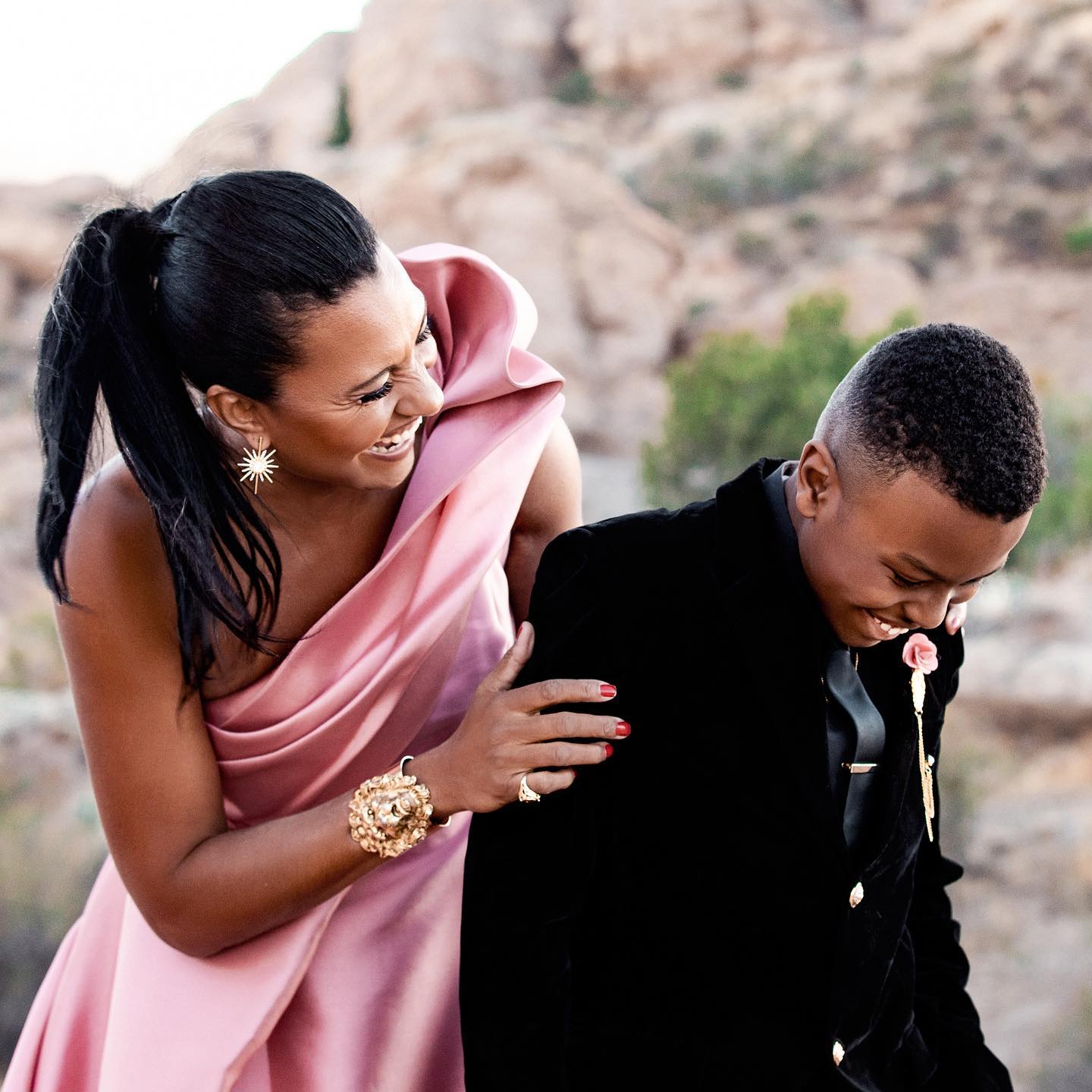 While Christine has garnered many accolades and earned prestigious positions in the entertainment industry, motherhood takes the top spot. Her son, Christian, sees his mom as a leader.  Accordingly, women in power have become second nature to him. She recalls when Christian was three and attended his first Sparks game when she was president and chief operating officer of the Los Angeles Sparks. The Sparks were his favorite team. “The guys who would ask him his favorite basketball team, when he would say the Sparks, they would say no, your favorite basketball team,” she says. “I would have to pause and look at Christian and say, ‘They mean men’s basketball, my love.’ He would then reply with ‘Oh, the Lakers.’” Christine believes that exposure to women in traditionally male spaces can suspend some ingrained biases from childhood. “If we can expose young men and women from all different backgrounds to all things that are possible, then you don’t have those limits that society teaches them,” she says. Christine believes she is making a significant contribution to society by mentoring young people and teaching her son progressive values at home. “I love mentoring and empowering those who are coming after me; hopefully, they will outshine me and arrive sooner and bigger and faster than I did,” she says. “I see myself building future leaders of tomorrow; ultimately, that is what we are put on the planet to do.”

Christine speaking at the RPAA’s Women Take the Stage in May 2021. Courtesy of RPAA