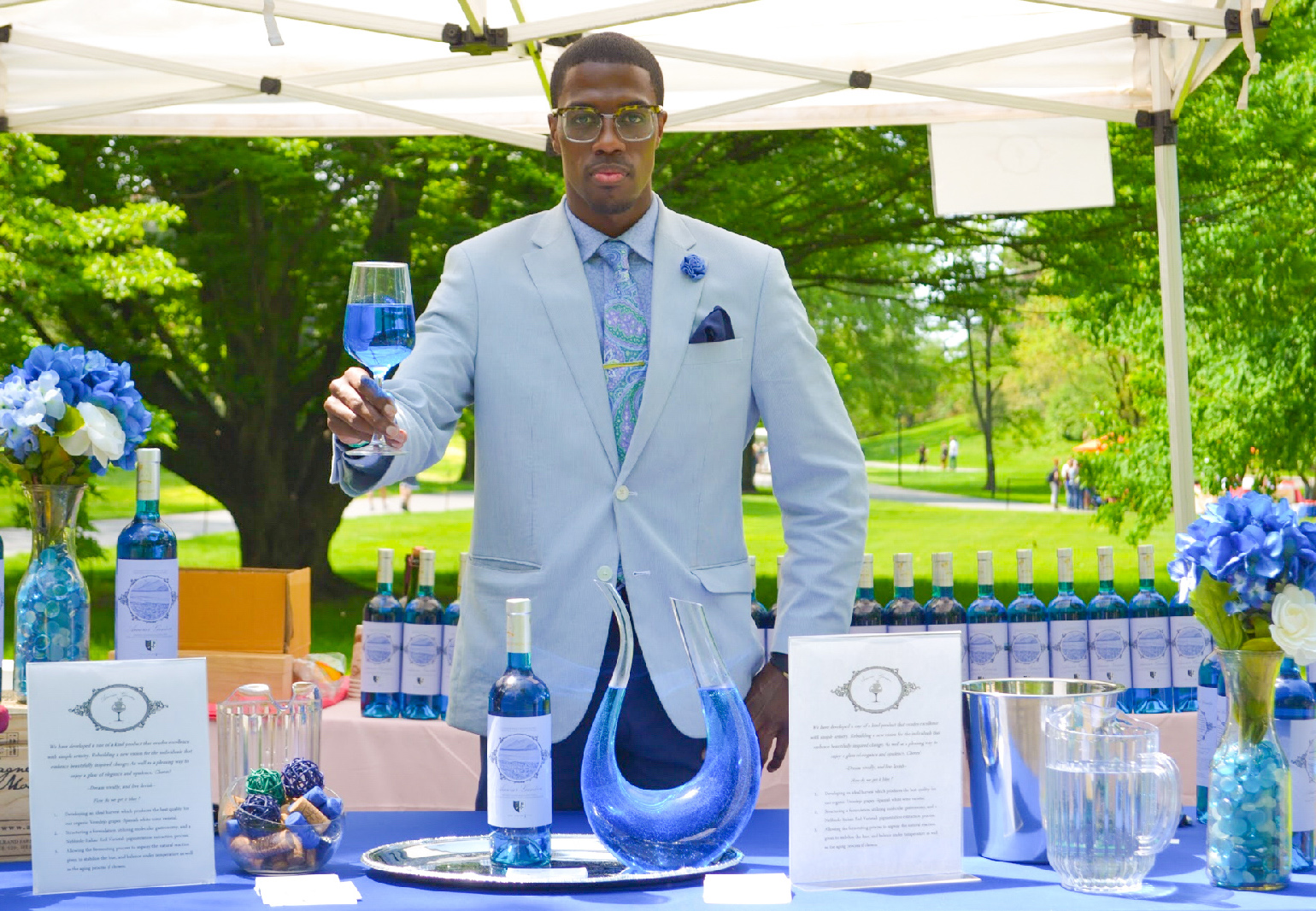 “Let the universe lead you.”

Coviello Salinès knows he’s on to something big. His product and brand, Amour Genève, is more than just wine with an “electric blue” hue. It is an inspiration for those dreamers to keep going. His work is a gleam of hope in the midst of tragedy. He has taken first place by creating something the world has never seen.

Coviello’s parents migrated from the Caribbean to the South Bronx, where he spent much of his early childhood. “They were rarely home,” he says. “They worked around the clock to provide us the life they never had.” His dad was a serviceman. His mom, a correctional nurse at Bellevue Hospital. When his father had the time, he used it to teach young Coviello the wonders of Neurology. He wanted his son to become a neurologist or neuroscientist. “He wanted me to be like the early Ben Carson, so he would bring home large brain books for me to study,” he says.

Life changed for Coviello when his father was deployed to Tobyhanna, Pennsylvania. “My life changed very drastically when dad got deployed. I was put into a school that was predominantly white,” he says. “This was around age 9 or 10. So, throughout my compulsory education, I was always around white kids. This was initially a very trying and traumatic experience for me. The area was very traditional in views and not accustomed to cultural change at all.”

“As beautiful as the world is, there is so much destruction in it. It’s important to be observant and steadfast. I’ve learned to be passive towards negative energy and to passionately embrace positive energy.”

His new community did not know much about his culture and he knew little about theirs. It took a while to get acclimated. Sports kept him sane during this time. “I did a lot of track and cross country. I wrestled and played soccer,” he says. “I had a lot of great coaches that would keep me on the right track through my high school career. They became my family since I had no family in the area.” Because his parents were busy working, they didn’t have time to come up with a strategy to help him adjust to his new neighborhood and school. “You start to lose identity and it took me a very long time to figure out who I was at a time when I thought I already knew who I was,” he says. “But bouncing back and forth through different demographics and geographies had some lifelong benefits. It allowed me to understand what it is that makes the world tick.” This moment in his life made him come to the realization that people are more alike than different. He admits this experience was important to his long-term personal development. “If I didn’t go through that period of disruption I would not have been as original as I am today,” says Coviello.

Aside from his parents, Coviello’s grandmother, Sarah Rosario, was a big inspiration for him growing up, especially after his parents got divorced. “She raised me when my parents were gone. She was known as the woman who would never turn away a child in need,” he explains. “I was always intrigued by the way she carried herself and the way she kept us all in line.” She was fundamental in developing Coviello’s discipline and common knowledge. Around this time, his creativity and entrepreneurship grew. “I was always interested in luxury and fashion. I was inspired by many designers and started to sew and create Miskeen-inspired art apparel as a child,” he says. “I was quite a creative child without even knowing it.” He likes to say that he was raised by families of many cultures and backgrounds: Italian, Puerto Rican, Black, and many more he cannot name. He was a child of the world. 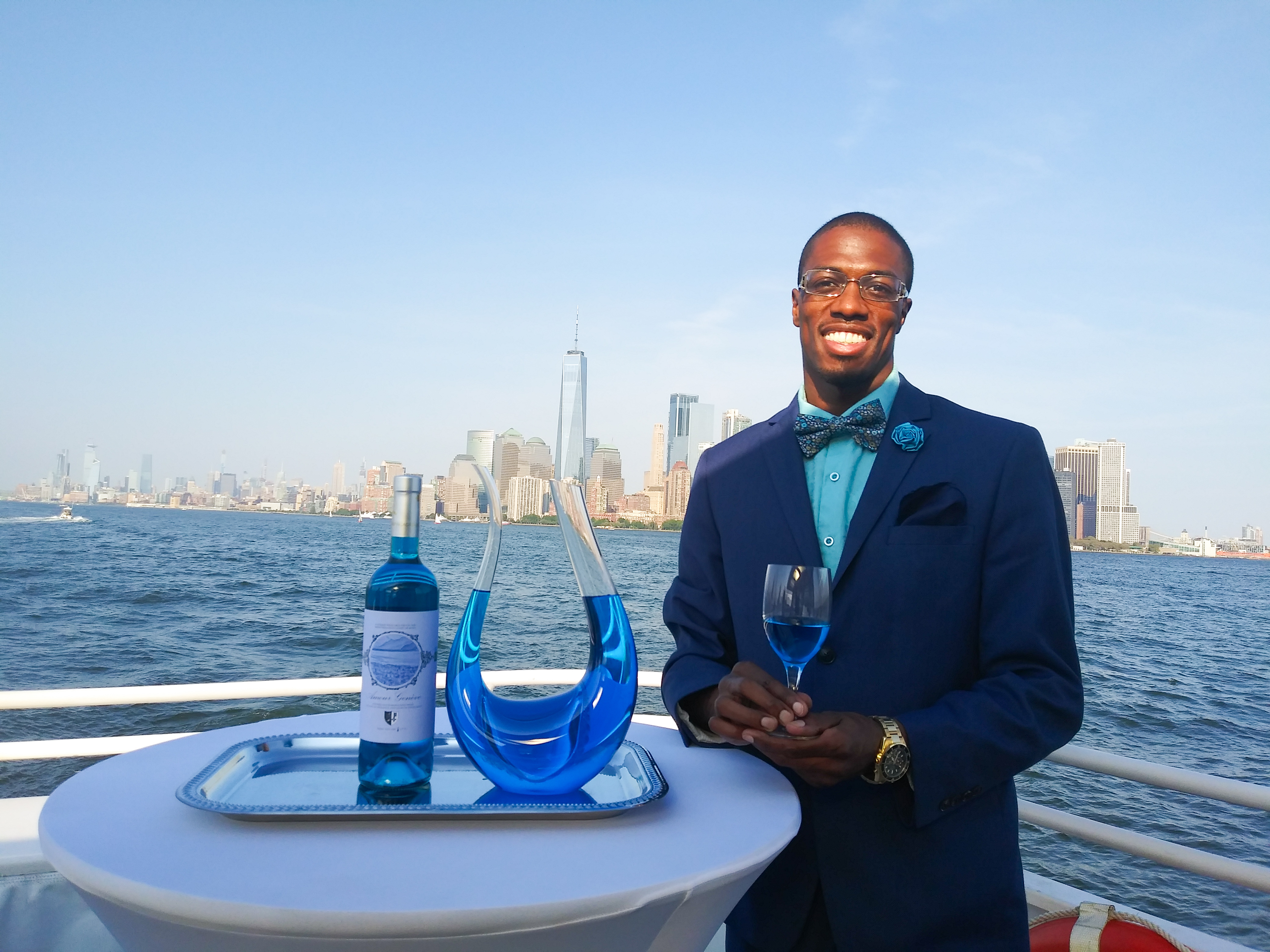 As an entrepreneur, Coviello has learned the hard lesson that not everyone has your best interest at heart. Similarly, you have to find people who are willing to support your vision. “It is very rare that you will find people who really understand everything that you’re doing, let alone accept it,” he continues, “either from them not being able to do it themselves or them seeing you in a certain light. There were a lot of people that would look at me and say, ‘ok you can’t do this but wouldn’t explain why,’’’ which to him, wasn’t very helpful or worthwhile to his entrepreneurial journey. “It is very important to know your own mind and your own story,” he says. “Because people can use their version of you against you. As beautiful as the world is, there is so much destruction in it. It’s important to be observant and steadfast. I’ve learned to be passive towards negative energy and to passionately embrace positive energy.”

During his childhood, he was taught to ski by his parents who enjoyed the sport in their better years. “My father used to share stories with me about his travels to Europe. He was in love with the nature of the city Genèva,” he explains. “We planned to go there one day but it never came to fruition.” Amour Genève was inspired by this trip that never came to fruition. Coviello says Amour Genève means “the love for Genève” in French. “I wanted to make sure this rare and original blue wine was something that was created around my father,” he says. “The love that he had for Genève and the love that I had for my father created this.” If you look at the illustration on the bottle, you will see a picturesque view of the city of Genève.

Coviello’s outlook on his business opportunities is nothing short of forward thinking. He knows his wine brand and other ventures are innovative. He’s not looking for the approval of others, but seeks understanding. He reflects on some of the most renowned innovators of their time who pushed on, regardless of public opinion. “Elon Musk didn’t look for approval when he was constructing Tesla. Albert Einstein wasn’t looking for acceptance and approval when he was calculating his formulas and theories,” he says with enthusiasm. “What does it matter what the industry thinks? If the idea is pitched correctly and with authenticity, the work can drive the idea forward into reality.”

“I wanted to make sure this rare and original blue wine was something that was created around my father. The love that he had for Genève and the love that I had for my father created this.”

We ask if he thinks there will ever be imitators and whether he has experienced negative feedback. “It’s funny because I don’t have too many naysayers these days,” Coviello says. He understands not everyone is a chemist, engineer or in medicine. They will not understand the more technical aspects of wine creation. That is where proper branding comes into play. “I have to share our story. I know I have to share the whole aspect of what this product is. I have to help people to understand the methodology and process behind my product. Knowing how much to share and what to keep is the key,” he explains.

He admits he isn’t reinventing the wheel. “I’m just creating something that people have never seen before. If it drives creativity, it drives creativity,” he says. “I’m going to continue being me and doing what I do. People don’t always embrace creativity as they should and greed can be overpowering, but there is always an open space for creativity.”

One of Coviello’s proudest moments was the day the European Union and the Alcohol and Tobacco Tax and Trade Bureau (TTB) sent him a letter of clarification for his formula. “It was a validation of what my father would always try to put into my head,” he says. “When I was young, I didn’t understand it. Now I see that this is all bigger than me.” He recalls when his father would watch National Geographic and the Sunday morning news. He was particularly a fan of programs detailing the lives of the Indigenous people. His father explained to him that if you really look into someone’s eyes, you can feel their passion and story. “Now when I look into people’s eyes and share my story with them, I can tell if they really understand it. That’s how I know my wine is bigger than me; how I figured out that I had made something special—the first naturally blue wine in the world. It’s the most rewarding feeling.”

“My greatest achievement is actually doing this—creating a wine product that has never been done before,” he says. “I’m a firm believer in the idea that things are brought to us for a reason. This was something I felt I had to do. So, this has been my greatest achievement—sticking with a process after more than 300 attempts and creating Amour Genève.” Coviello often wonders why it was him. Why was his product chosen to be approved? “This is the universe speaking,” he concludes. 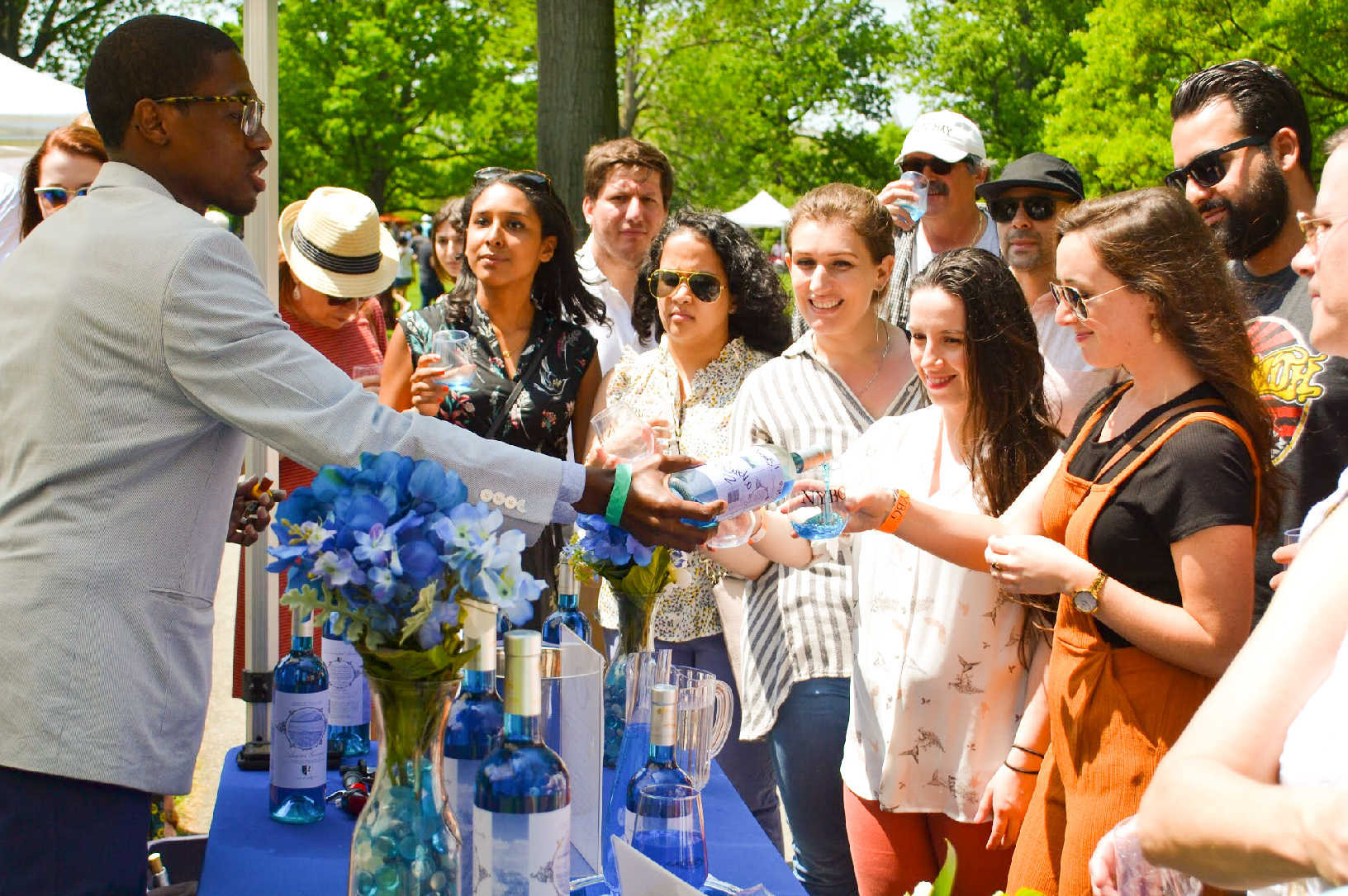 Coviello believes anything is possible. “It takes persistence, being true to yourself and not listening to the negatives,” he explains. “I truly believe you can do whatever you feel like you want to do.” He dismisses what he deems as the “cookie-cutter shape of presuppositions” when society speaks about paths to success. He feels the educational system needs immediate reform to better prepare students for the trials of entrepreneurship. Art can liberate minds for greatness.

He’s a skier and a golfer. With humor, he admits people wonder how he has time to do these things. “Networking and connecting with people has always been my strong suit,” he says. “That is something I’ve always loved to do. It keeps me balanced.” To be a successful entrepreneur, Coviello emphasizes the importance of being present and not glued to the phone or computer screen. “To be a successful entrepreneur you have to understand all aspects of life, aspects of many cultures, and understand how to pivot,” he says. “Pivoting is very important.”

He continues to ponder the mentality needed to be a successful entrepreneur. “Understanding what direction to take at any given time—when to move, where to go, and how to time your movements is very important,” he says. “You have to learn patience. Relaxing can help that; whether it be meditation or just going on walks.” For a brief moment, he reflects on one of his father’s favorite pastimes: walking. “My father would go out in nature and relax. I find myself doing that a lot now,” he says. “It’s crazy. You can’t deny the gene pool,” he laughs.

As an entrepreneur, Coviello has a few projects in the pipeline including logistics applications and dealing with the important issue of mental health. “I’m working on a few interesting projects with some colleagues of mine. Most of them deal with mental health. Being a black entrepreneur in America can sometimes be very trying. I appreciate those in the industry who are keen on mental health and ask me how I’m feeling. ‘Where is your mind?’ ‘How are you?’ ‘Where are your levels of stress?’ I think those are questions we don’t ask each other enough.” This is an issue that hits close to home for Coviello.

In 2010, Coviello lost his father. “I lost my father very tragically. We still don’t know what happened,” he says. “Mental health is what sent him down a destructive road. I always wondered in those moments of his life, where was he? Nobody had ever asked him how he was doing; how was his mind. He never really discussed it and I wonder if it was something I could have changed.” With his father’s memory in mind, Coviello says he will continue to carry on his legacy. He looks to the universe to lead the way, after all that is what got him here in the first place.