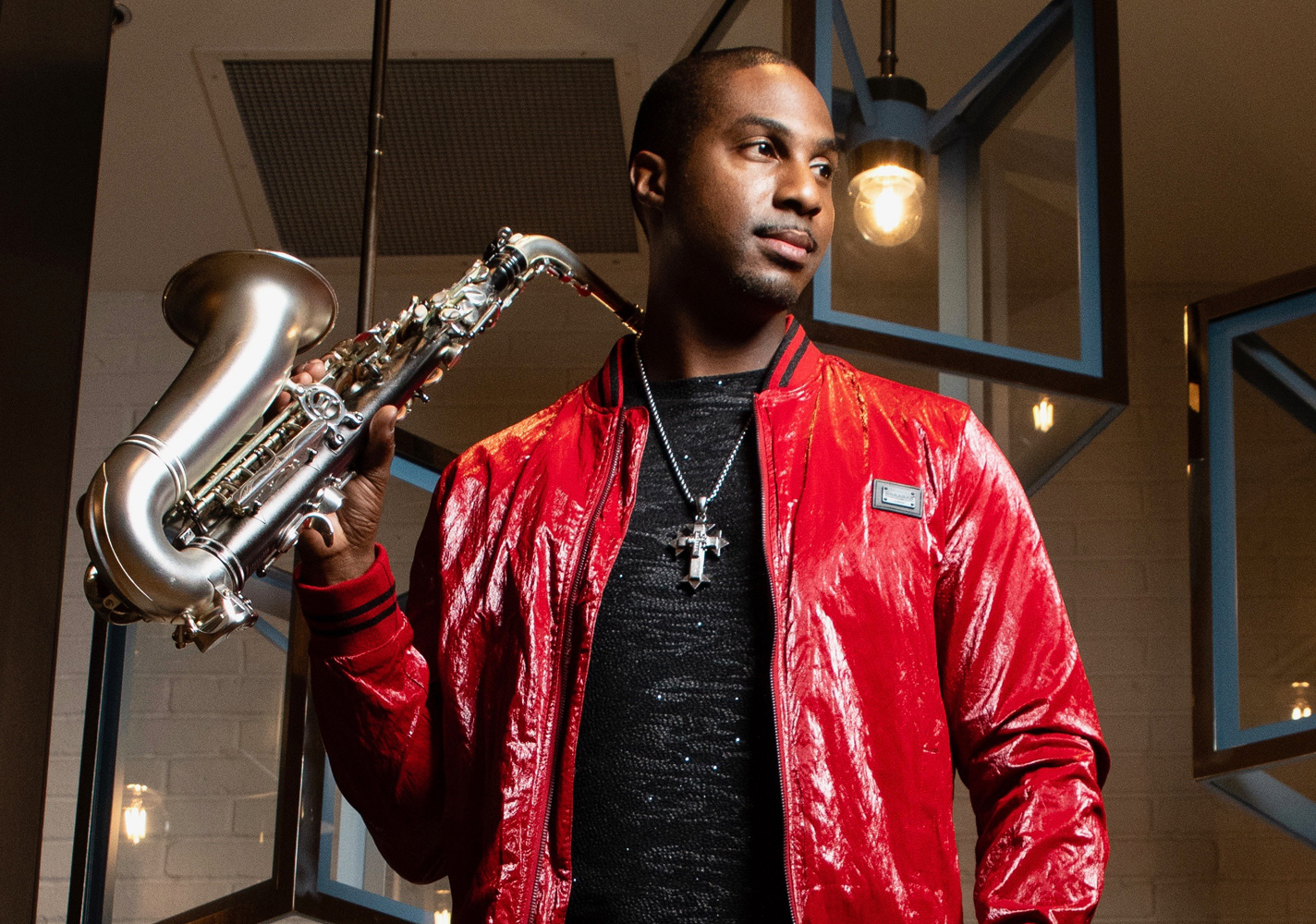 “Make music that unites us all.”

Saxophonist Eric Darius knew he had to work harder than everyone else to become a great musician. He grew up inspired by the saxophone greats before him: John Coltrane, David Sanborn, Grover Washington, Jr., and Cannonball Adderley, among others. His upbringing in Tampa, Florida, was essential in developing his musical growth. He studied at the Howard W. Blake High School of the Arts in Tampa, Florida, and went on to study music at the University of South Florida. Before he reached the age of 18, he was well on his way to stardom.

Eric considers his father to be a guiding force in his life. At the age of 11, his father became his manager and was by his side 24/7. Eric grew up in a family of musicians. His Haitian father plays bass, his Jamaican mother plays piano and sings, his younger sister plays clarinet and sings, and his older brother plays the trumpet and drums. Both of his parents inspired a young Eric to follow his dreams and stay true to himself. Some musicians wait for what feels like an eternity to find some success, but at 17 everything began to make sense for Eric after he heard one of his songs on the radio and was overjoyed. However, it wasn’t until 2008 that he felt “validated.” In that year, he got his first number 1 song on the Smooth Jazz Billboard chart with his single “Goin’ All Out,” released under the legendary jazz label Blue Note. “That was the point where all of my hard work had paid off, and I knew my work was being appreciated around the world,” Eric says. 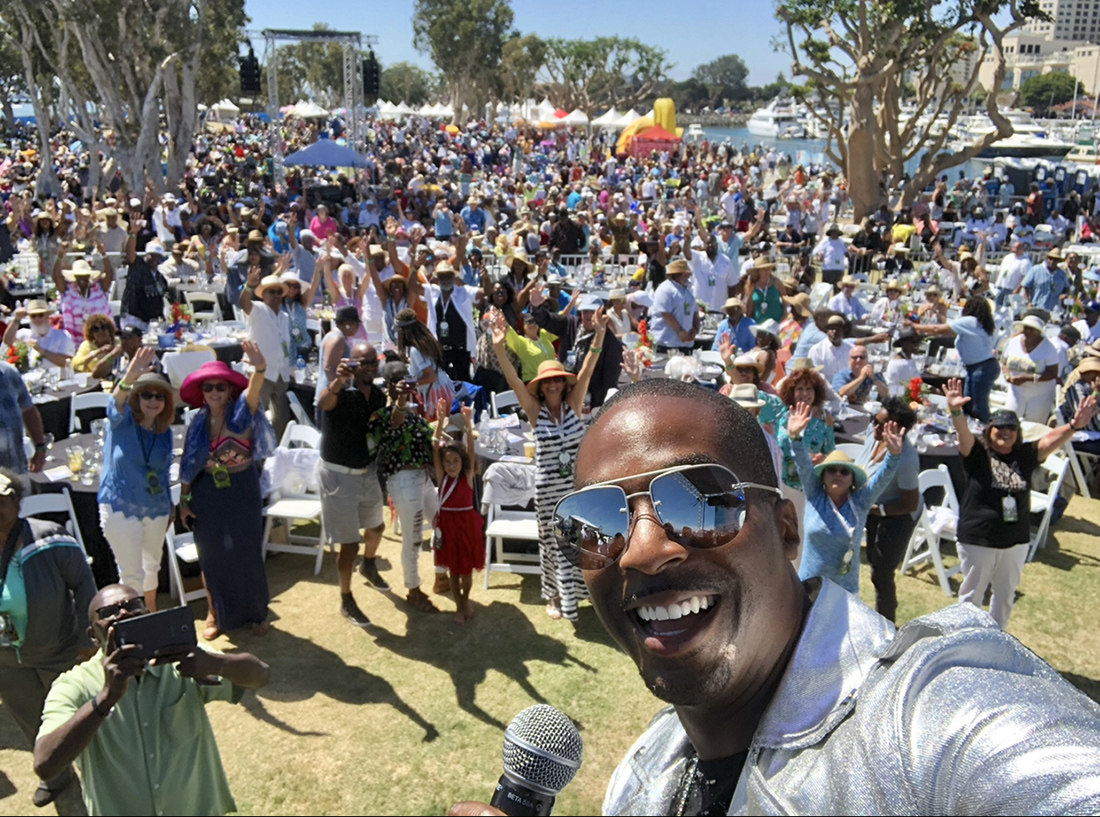 While he has achieved many milestones and wins throughout his career, Eric considers starting his own record label, SagiDarius Music, his greatest achievement so far. “I’ve been making music since I was 12 years old,” he says. “But starting my own label a year ago is the ultimate achievement for me from a career standpoint and something I can now call my own.”

Eric Darius has shared the stage with many music legends such as Prince, Babyface, and Mary J. Blige, to name a few. “One thing was consistent, they were always pushing themselves constantly,” he recalls. “Their standard of excellence was on such a level that I had never experienced before.” For Eric, being excellent wasn’t from just a performative standpoint, but from a business perspective as well. He continues to aim higher. One day, Eric would like to work with Stevie Wonder. “He’s one of the guys who truly influenced me and inspired me as a musician and as a songwriter,” he says.

“My ultimate goal is to make music that is relevant to all of the generations and bring people together.”

When asked if his music inspiration comes organically or externally, Eric says it’s a little bit of both. “As a musician, music has always been organic,” he explains. “I grew up listening to R&B, hip-hop, jazz, rock, reggae, soul, and funk; so, my music is not just jazz.” Eric has stayed true to his style even when record labels and management teams tried to pull him in different directions. His artistic vision has always stayed intact. It’s important for him to continue to evolve and push what he can do musically. He works with no boundaries or genre labels. “At the end of the day, it is just music,” he says. “My ultimate goal is to make music that is relevant to all of the generations and bring people together.” 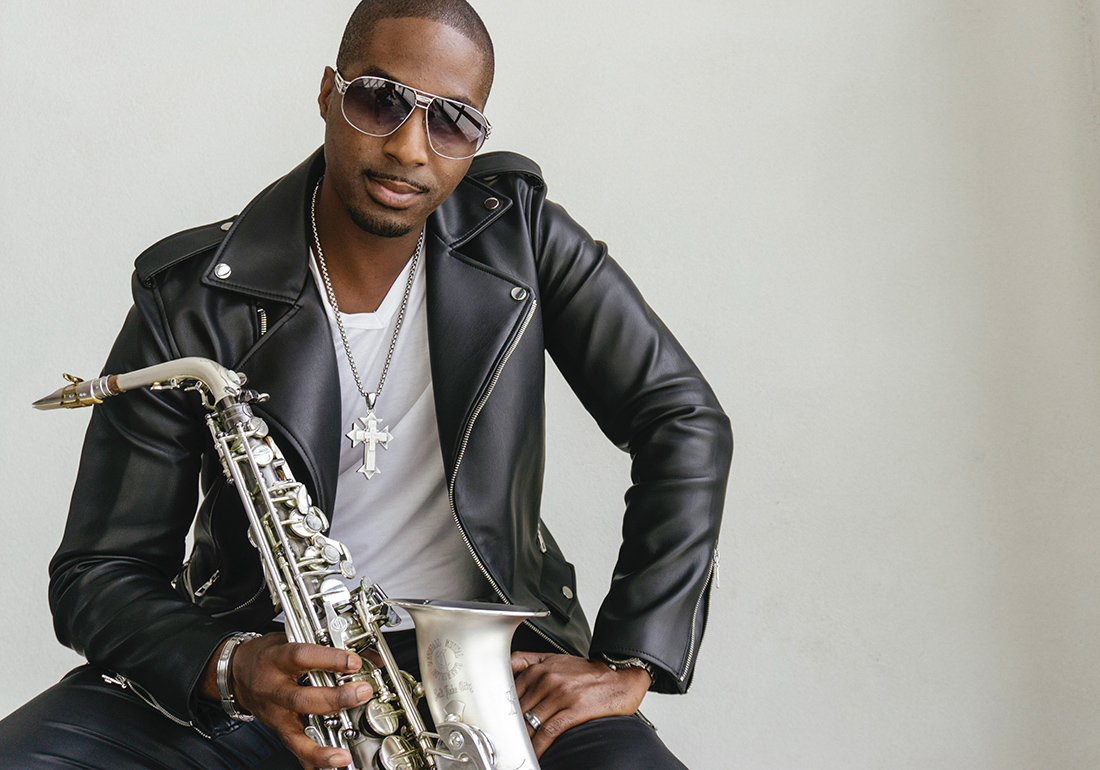 Eric pays it forward with his talents and gifts. His music education program, On a Mission in the Schools, exposes youth to the wonders of musical expression. He teaches his students the 5 Ps: practice, patience, persistence, perseverance, and prayer. “These 5 Ps have truly guided me throughout my life,” he says. “Not just from a musical standpoint but from a life standpoint.” Eric tells his students that there is nothing wrong with imitating the masters of their instruments. In fact, he encourages it. He recommends using the creativity of others as a blueprint to eventually innovate and take on their own style and embrace their individuality as musicians. “At one point everyone, even those outside of music like athletes and entertainers, has had someone they looked up to and studied to better themselves, incorporate their style and made it their own.”

By choice, Eric Darius doesn’t take much time to rest. He says he always had a strong work ethic. In high school, he played basketball, ran track, and was part of the marching band, the jazz band, and wind ensemble. “I was doing over 100 shows a year as a 14-year-old in addition to writing and creating my own music,” he says. “So fast-forward to today and not much has changed.” Eric is busy building a musical empire, as well as creating music on his own. He plans to release a new album in 2021. His new single, “Summer Feelin’ (featuring Paul Jackson, Jr.),” was recently released on July 24. It’s a must-have, feel-good song to carry you through the summer. He got married three years ago and while he is always working, he understands the importance of building a healthy relationship with his wife. Eric and his wife have made a pact to go on vacations periodically to decompress, recharge, and reflect. 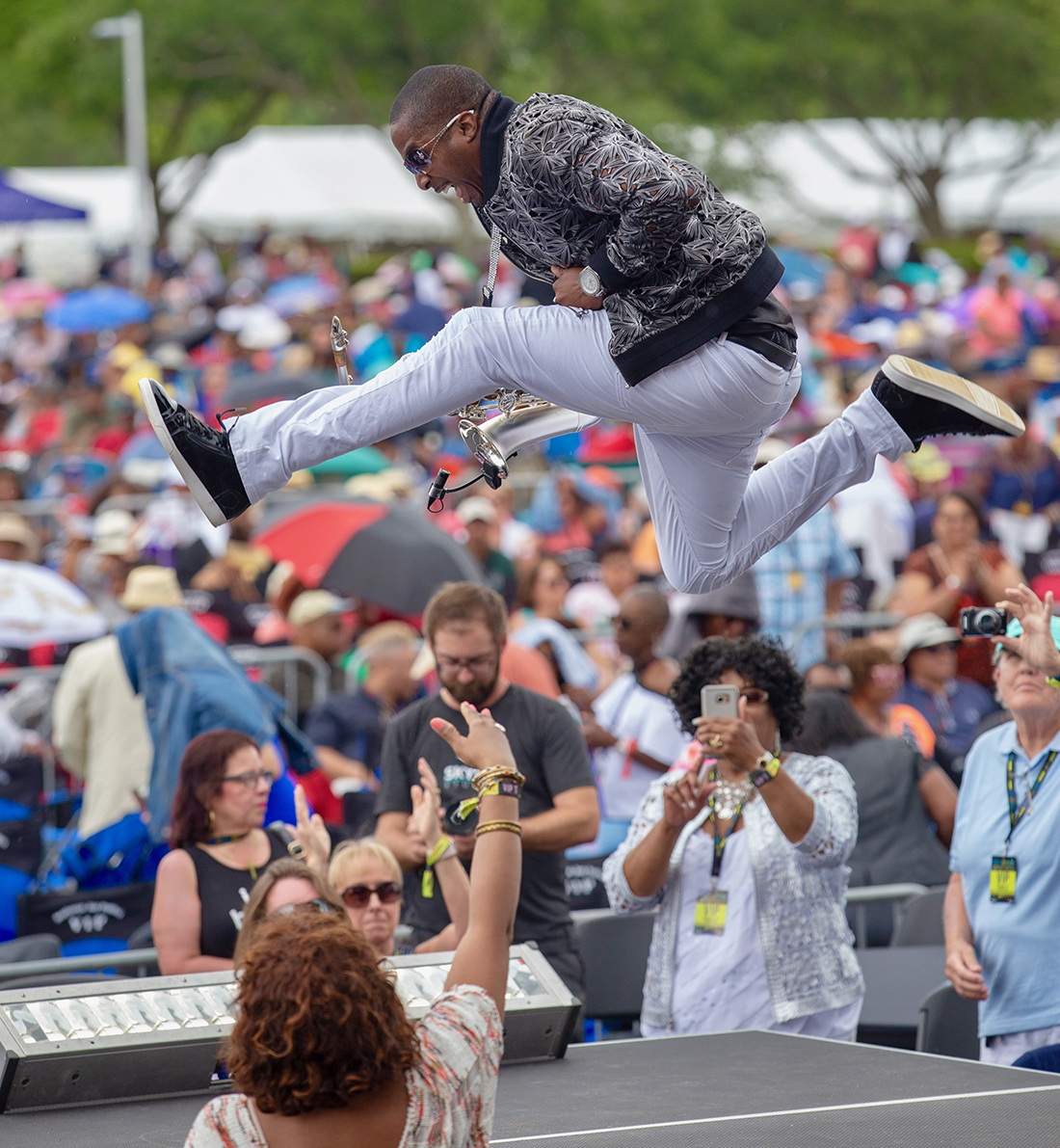 Eric says cooking is therapeutic for him. This has become even more apparent to him during this time where we are encouraged to stay in as much as possible. “It is something that I’ve been doing more of these days, so that’s been fun,” he says. Eric is usually in the gym about 4 or 5 times a week and maintains a healthy diet. He tries to stay active, whether that means golf or basketball, but he’s okay with working out at home too. He jokes that since the pandemic, he has been at home the longest he’s ever been. “I remember the first week, I was like, this is cool,” he recalls. “I get a little bit of downtime. Fast-forward to the second week and I’m like, now what? By the third week, I completely immersed myself in my work, working on my business and music. So, I’m back into that constant workflow.”

To keep up with his fans, Eric puts together concerts every Saturday on his Facebook page @OfficialEricDarius. “It is one way that I like to connect with my fans and keep uplifting spirits and performing every single week for free,” he says. “I believe God has given me this gift to share with people and so I use it to inspire others in this difficult time.” 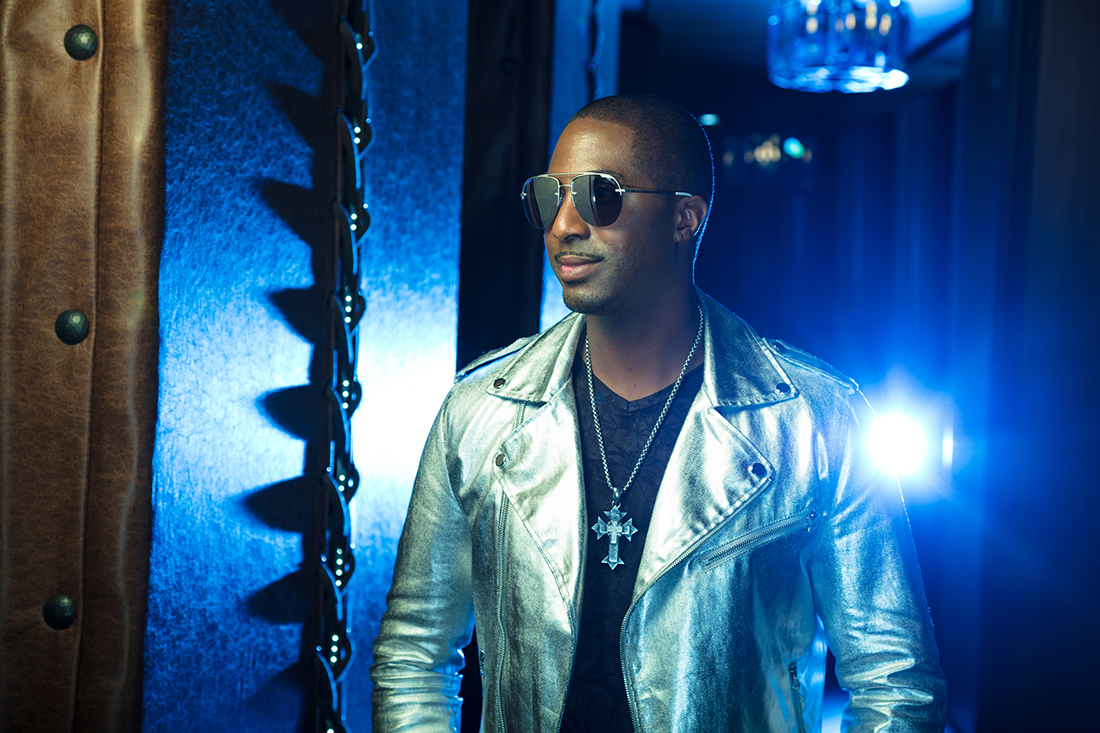 As if he’s not busy enough, Eric continues to work with his nonprofit that gives instruments to underserved kids. He is also looking to sign new talent to his label. He’s not looking for any style in particular so send him your best stuff if you think you have what it takes. “I’m simply looking for people with talent who need an outlet and are looking for that opportunity,” he says. With a nation in the midst of radical change, it is easy to imagine there are plenty of musicians who have a lot to say. Eric Darius is giving them the platform to express themselves freely.