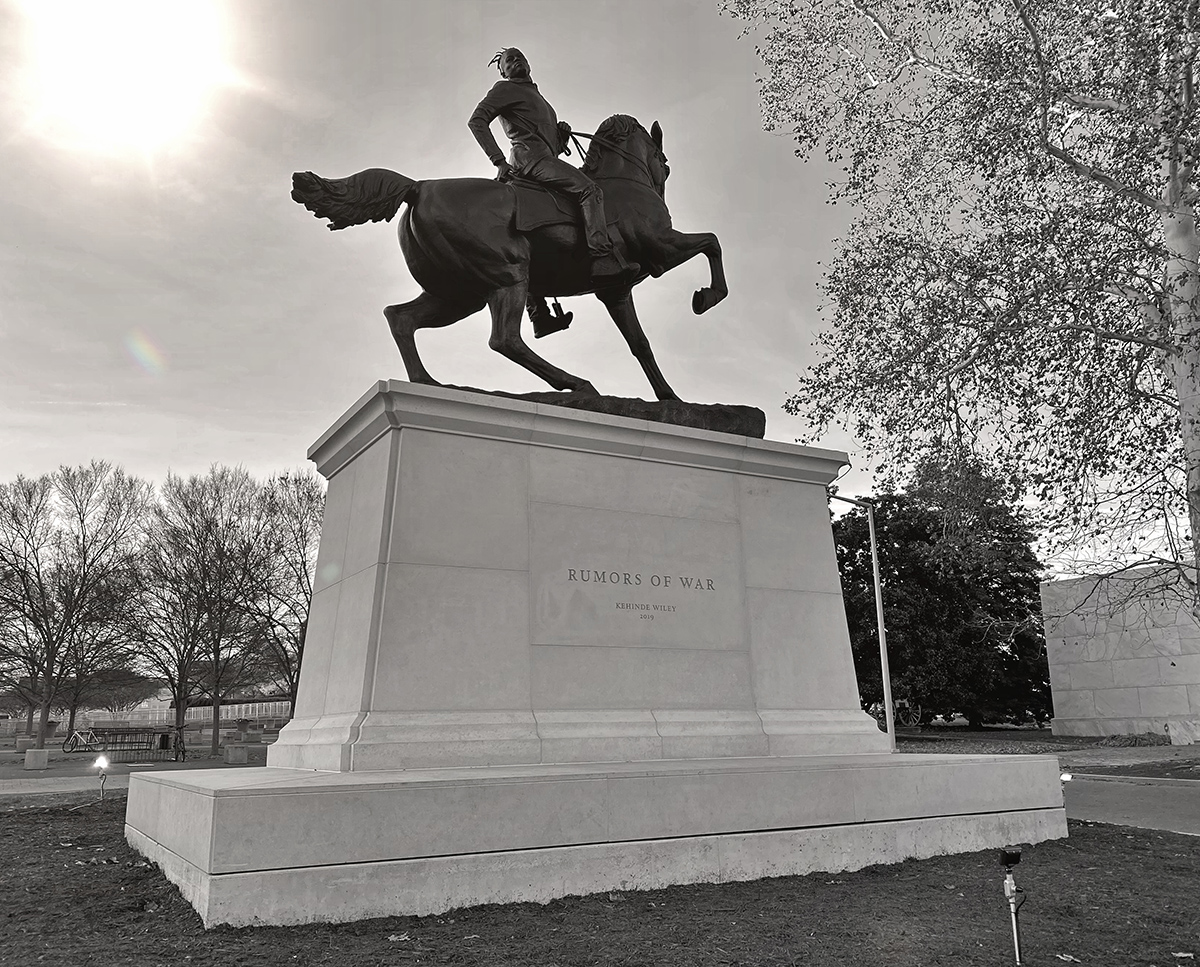 Rumors of War by Kehinde Wiley. Photography by Queon Martin.

Each month we highlight a community program that aligns with the values of SoulVision Magazine. We believe engaging with one’s community is critical to fostering positive change in the world. In early December, many stood on the grounds of the Virginia Museum of Fine Arts (VMFA) to witness the spectacle that is Kehinde Wiley’s Rumors of War. Kehinde Wiley, a member of Generation X and a wildly successful and celebrated artist, stood in front of thousands in Richmond, Virginia, dressed in black Converse sneakers and a bright suit that was inspired by his Nigerian roots. As he stood at the podium, Kehinde spoke to the crowd about art, our shared history, and most importantly, the progress of culture. “There is something moving in the culture and there is something changing in the winds,” he said.

Kehinde Wiley was born in 1977 and grew up in South Central Los Angeles, California, in the late 80s. He has studied art since the age of 11. To protect her children from the streets, his single mother sent Kehinde and his twin brother to an art conservatory on the weekends. He eventually developed an interest in painting self-portraits. He also frequented the Huntington Library and the Los Angeles County Museum of Art where he would observe portraits of noblemen. What fascinated Kehinde the most was what led these noblemen to make these all-important portraits of themselves. As he went on to receive his BFA from the San Francisco Art Institute and his MFA from Yale University, Kehinde began to create portraits not of himself, but of the people of the world and the community he was a part of. Specifically, he often depicted black men in America who looked like him.

“It’s not about black men, it’s about all of us. It’s about a society that can include all of us. And in that sense, we should all be proud about what our America looks like.”

27 feet tall, 25 feet long, 15 feet wide and made of bronze, Rumors of War represents the changing tide of our country. The man on the statue is a black man who could be from any urban area: dreadlocks, Nike high tops, and a hoodie. A figure who is often still seen as a menace is now up on a pedestal. According to Kehinde Wiley, he was inspired by the statue of Confederate General J. E. B. Stuart which sits on Monument Avenue. In his speech, he referenced the Confederate statues on Monument Avenue with awe and a little bit of irony. “When I came to Richmond all of those years back and I saw Monument Avenue, and I saw some extraordinary sculptures. People took a lot of time to make something powerful and beautiful and elegant. And menacing,” he said.

Before the big reveal (that took longer than expected due to the tarp getting caught in the dreadlocks of the man on the statue), Kehinde pointed out the connection this work of art has to all of us. “It’s not about black men, it’s about all of us. It’s about a society that can include all of us. And in that sense, we should all be proud about what our America looks like.” After his speech was long over and the tarp was still lingering on the horseman’s dreadlocks like a “bridal veil” (as one onlooker referenced), the crowd stayed put. After a local firefighter set the statue free, the crowd cheered as the statue finally was unveiled in all its glory. They finally had the opportunity to take their first glimpse at a representation of “America 2.0.”