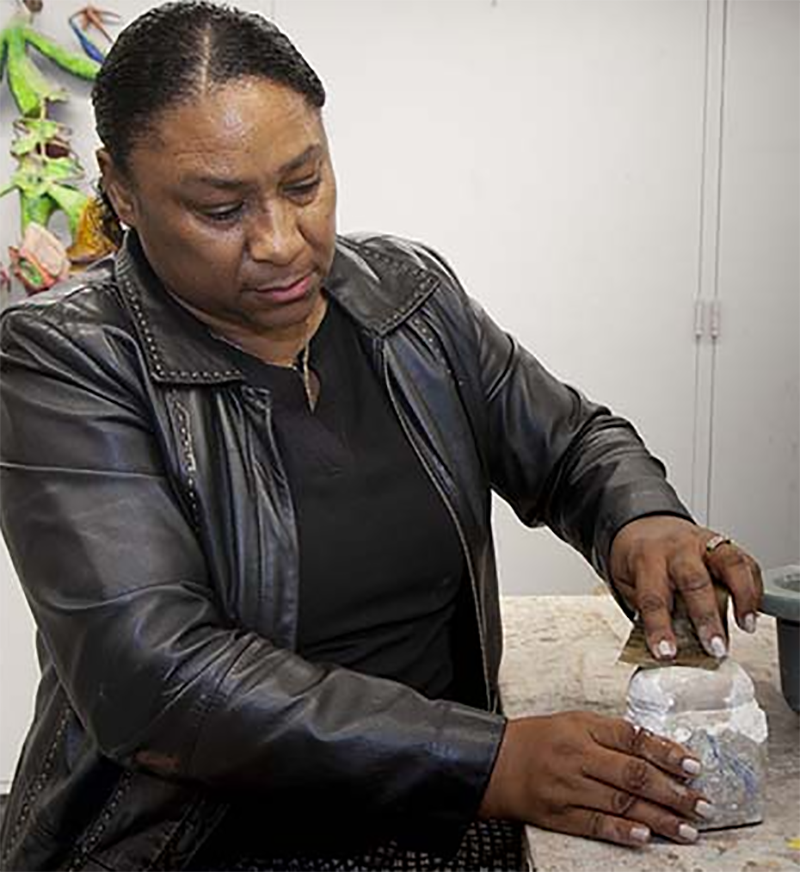 “Our struggles can be turned into something beautiful.”

Stella Singleton-Jones always had the gift of creating meaning through art. Her stone sculptures have been exhibited at the Oscars, Emmys, MTV, and ESPY Awards pre-shows. “The inspiration for my sculptures comes from the strength shown by passionate individuals and God’s earthly creation,” she explains. For Stella, her art became her therapy in the midst of tragedy. Now the world gets to see her beautiful stone sculptures and be inspired by her story.

It was while Stella was a student at Santa Monica College (SMC), that she discovered her niche for creating stone sculptures. But her dreams had to be put on hold. In the late ’80s, her brother, Derek Singleton, developed and died from meningococcal spinal meningitis. The death of her biggest supporter affected her deeply. Stella could not bring herself to continue with sculpting, so she dropped out of college and began working as a word processor. 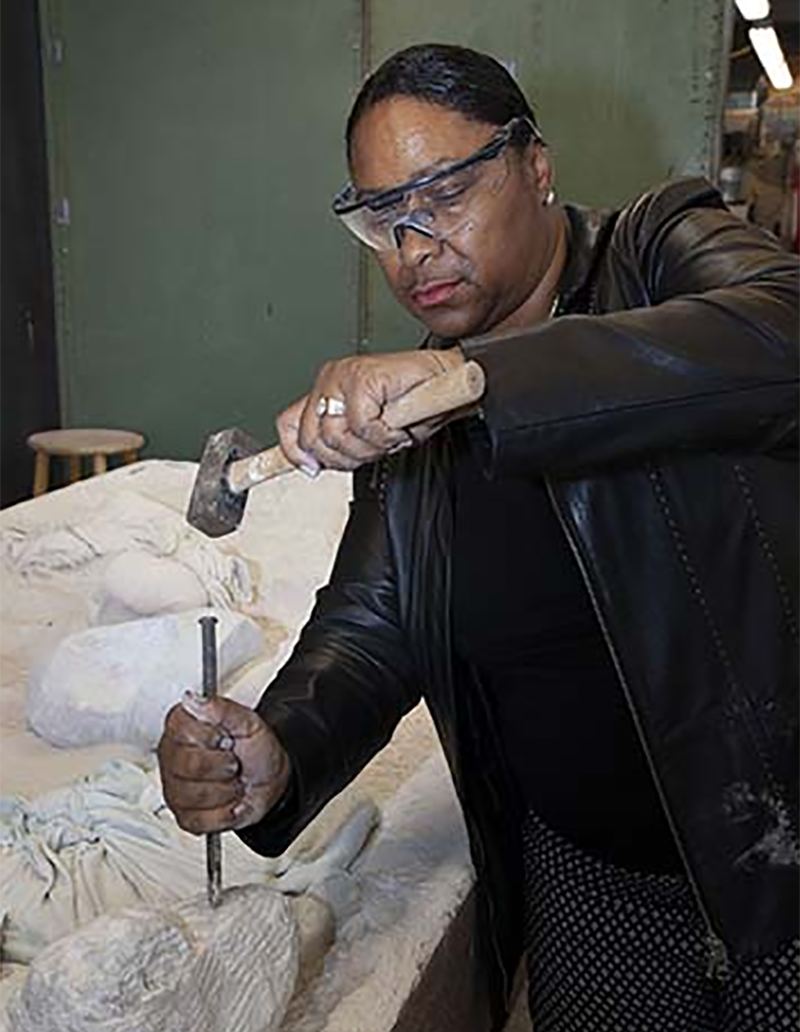 On January 16, 1996, Stella was diagnosed with spinal meningitis, the same disease her brother suffered from. The disease was a consequence of their genetic makeup. She found herself in the hospital in disarray and surrounded by medical staff in white coats. But there was a cure for her: consistent doses of vitamin C, along with months and now years of physical therapy. Meningitis affected Stella’s day to day life. She wanted to give up. Her doctor at the time, Dr. Gorniswky, recommended she get back out there and return to school. She hadn’t been to school or sculpted in twenty or so years. As she returned to sculpting, she began to regain confidence in her talent. She reflected on her fight with meningitis and channeled that energy into the creation of her now-iconic Them Bones sculpture. 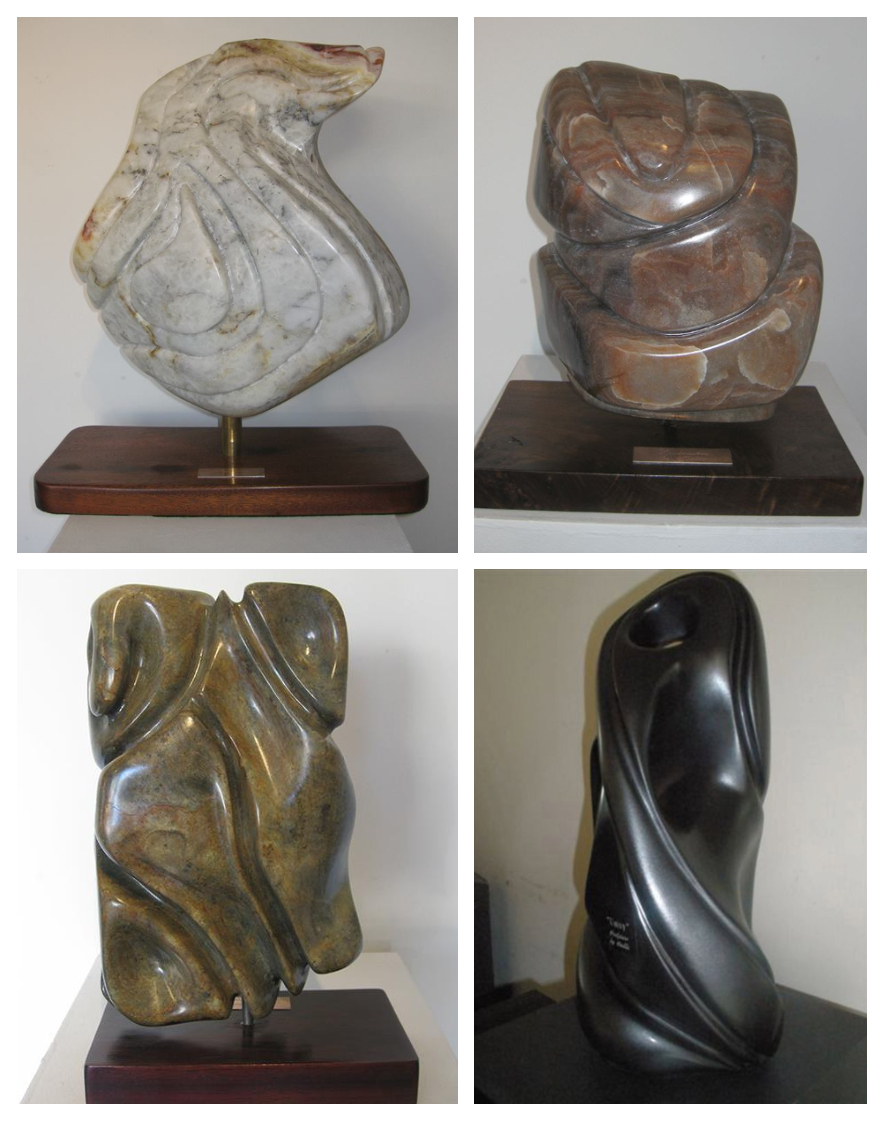 In 2009, as former President Obama began his historic first term, Stella was inspired. She created a sculpture called Unity and wanted to share it with the world. She googled the White House’s address and shipped it off. She wrote to Obama, “May this ‘Unity’ sculpture serve as a constant reminder that change is possible when we the people unite as one.”

“My stone sculptures represent strength, harmony, calmness, and peacefulness—the elements that enhance the beauty in life.”

The former White House curator, William G. Allman, called her to say they had accepted her gift. She received a phone call from President Obama but missed his call. Fortunately for Stella, he ended up leaving her a message. Unity was displayed in the Oval Office for two years before it was moved to the White House archives in 2011.

As Stella continues on her journey, she hopes to inspire others to follow their dreams. “My stone sculptures represent strength, harmony, calmness, and peacefulness—the elements that enhance the beauty in life,” she says. “I hope they serve as inspiration to others to never give up on one’s dream.” The lesson here: Our struggles can be turned into something beautiful.