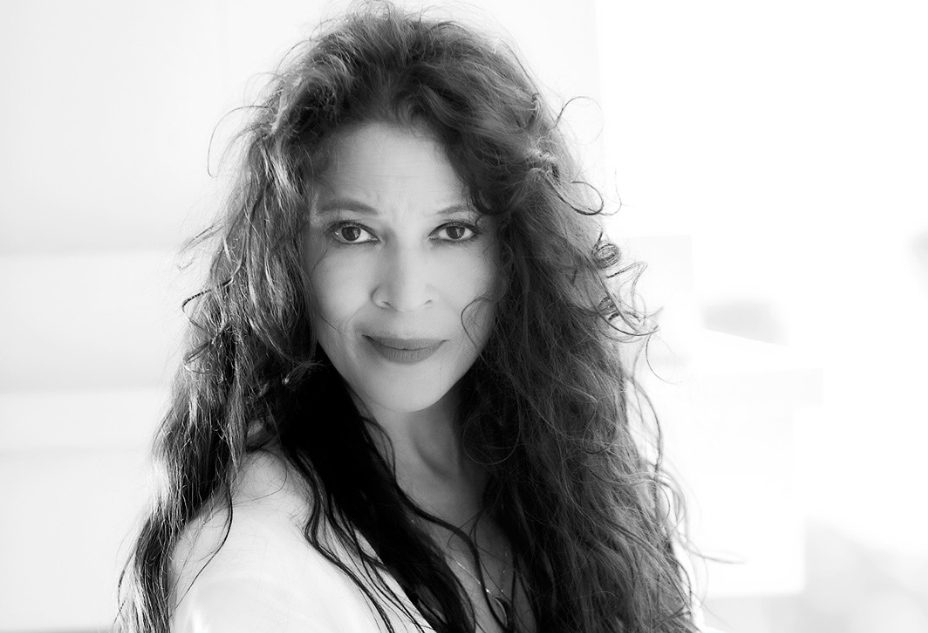 “Our history is your history.”

Tai Babilonia is one of the most successful skaters in figure skating history. Tai has always had the drive to be successful. “I was an overly driven little kid, so figure skating and the hard work that it entailed was the perfect outlet for me,” Tai says. Her sanctuary was the ice. “I was and still am today happiest on my frozen stage. It’s my safe place,” she says. “I was blessed and so lucky to have a family that supported my passion.”

She made history with her skating partner Randy Gardner when they were the second U.S. pair team ever to become World Pair Champions at the World Figure Skating Championships in 1979 (the first were Carol and Peter Kennedy who won the title in 1950). They had a working partnership like no other. As they jumped and spiraled on the frozen stage, the medals and accolades continued to be awarded. They were five-time U.S. Pair Champions and qualified for the Winter Olympics in 1976 and 1980. In 1991, the pair was inducted into the U.S. Figure Skating Hall of Fame. With a fruitful and groundbreaking career, Tai says it is time to tell her story in her own words. She has been hard at work writing her memoir. “I am thankful for the support and encouragement from family and friends,” she says. “I’m now finally ready to commit to telling my personal and sometimes, very revealing story.” 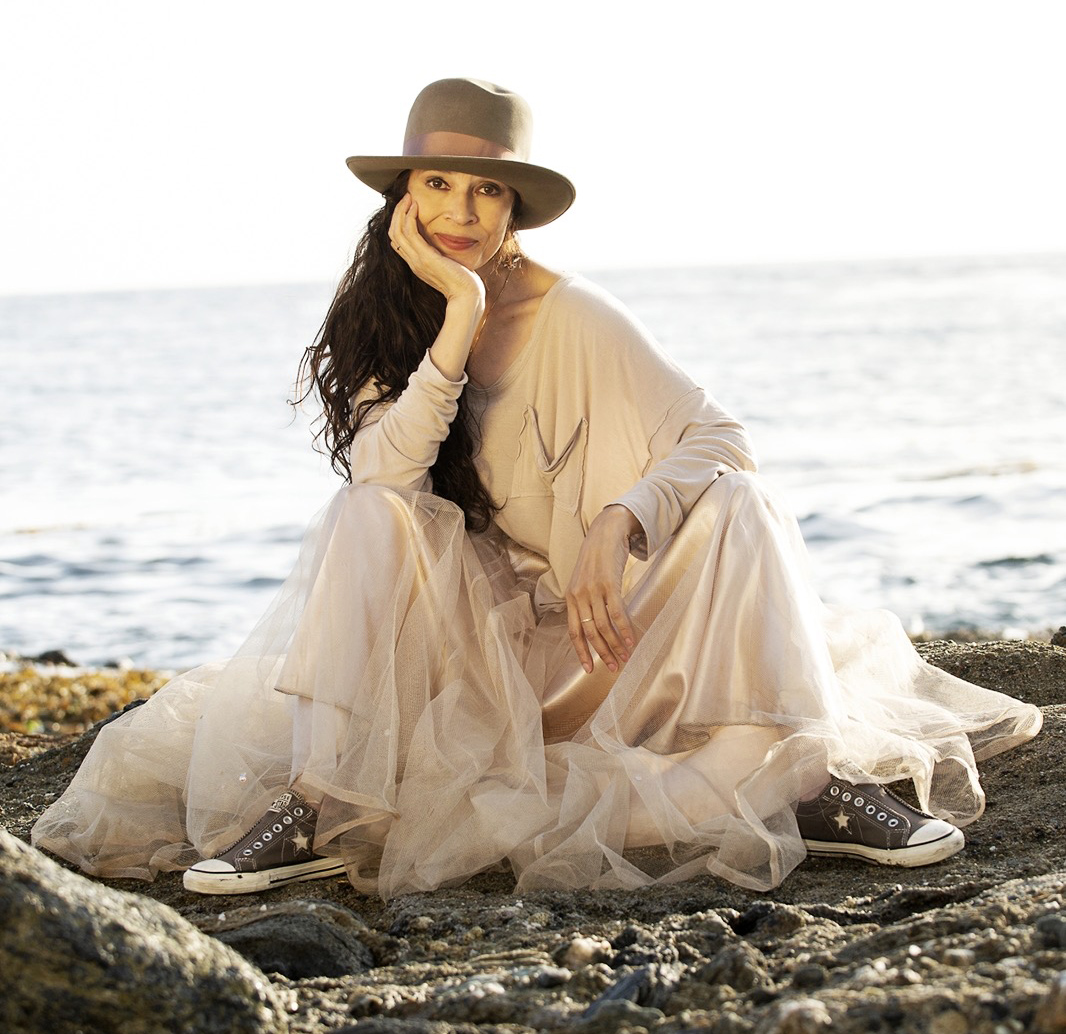 Tai has also partnered with Atoy Wilson to bring the story of black skating pioneer Mabel Fairbanks to the masses. Mabel Fairbanks is the first and only African-American skating coach to be inducted into the U.S. Figure Skating Hall of Fame. She coached and fought for skaters of color to have the same opportunities as their white counterparts. In addition to Tai and Wilson, her past protégés included Richard Ewell and Michelle McCladdie. Mabel was also a mentor to Scott Hamilton, Debi Thomas, Rudy Galindo, and Kristi Yamaguchi.

“I made her a promise that we would share her incredible story of strength and perseverance that led to paving the way for minorities to compete and flourish in the sport of figure skating.”

As executor of the Mabel Fairbanks estate, Wilson has a responsibility to share her story. She was Wilson’s first coach and in 1965 was responsible for breaking down the color barrier and making skating history by getting him into the prestigious Los Angeles Skating Club. He was the first black member of the club and went on to compete in the U.S. Figure Skating Championships, where he became the first black figure skater to win a national championship in 1966. He was 14. 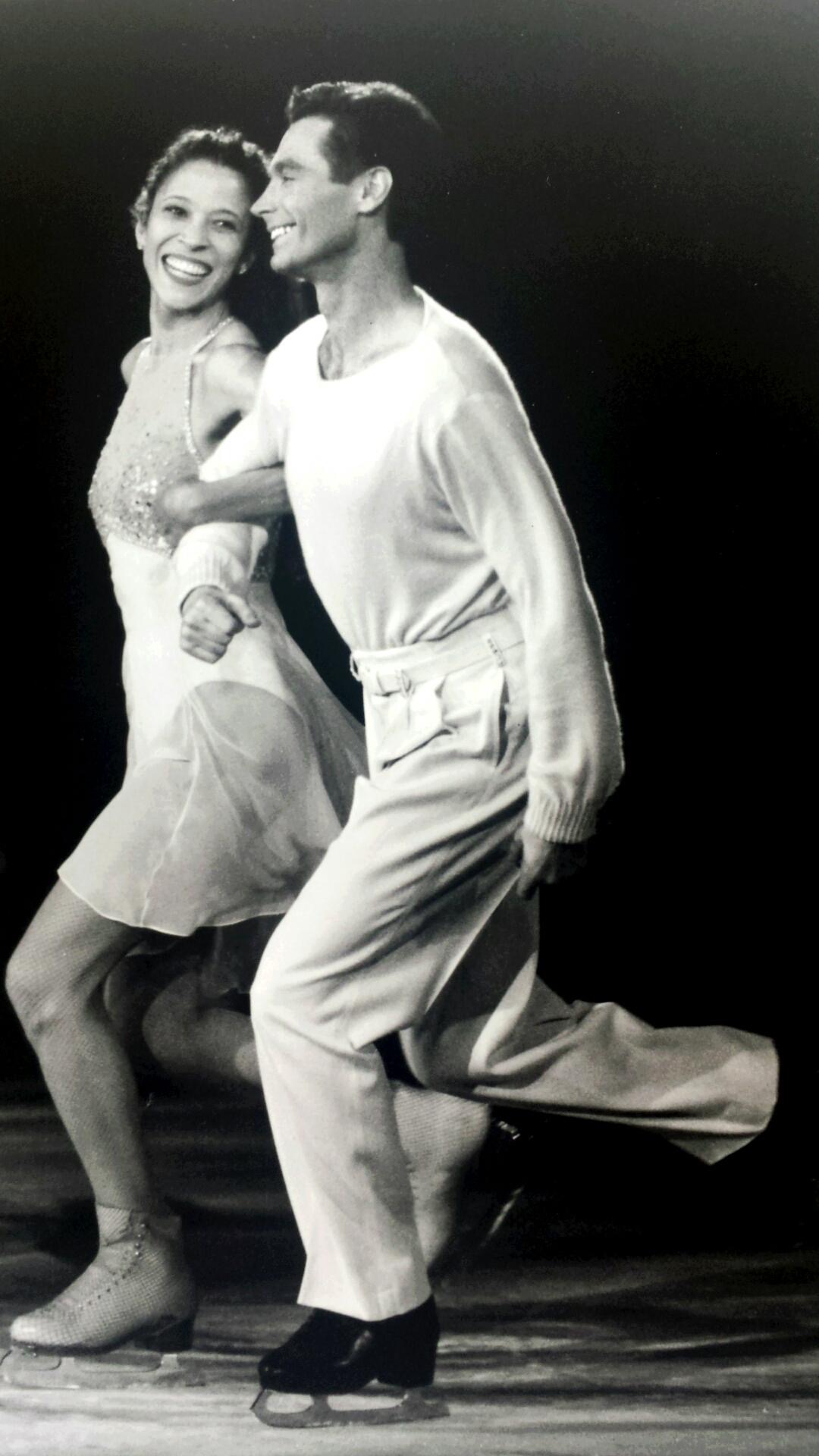 Tai Babilonia and her skate partner Randy Gardner at the 1997 “Champions on Ice” tour. Photo courtesy of Tai Babilonia.

Before Fairbanks passed away in 2001, Tai promised that she would share her story with the world. “I made her a promise that we would share her incredible story of strength and perseverance that led to paving the way for minorities to compete and flourish in the sport of figure skating,” she explains. The plan is to tell her story as an original limited series for television. The working title is Black Ice: The Mabel Fairbanks Story. Tai is forever grateful and indebted to Fairbanks for her over 50-year career as a figure skater. She is the woman responsible for pairing Tai and Randy together in 1968. “She fought hard for her students. Now we fight for her,” she says. But Fairbanks’ legacy will not go in vain. In fact, Atoy and Tai have been in talks with Damion Thomas, the curator of sports at The Smithsonian NMAAHC to expose a new generation to her glass-shattering legacy. The museum is interested in featuring photos and memorabilia from her estate. 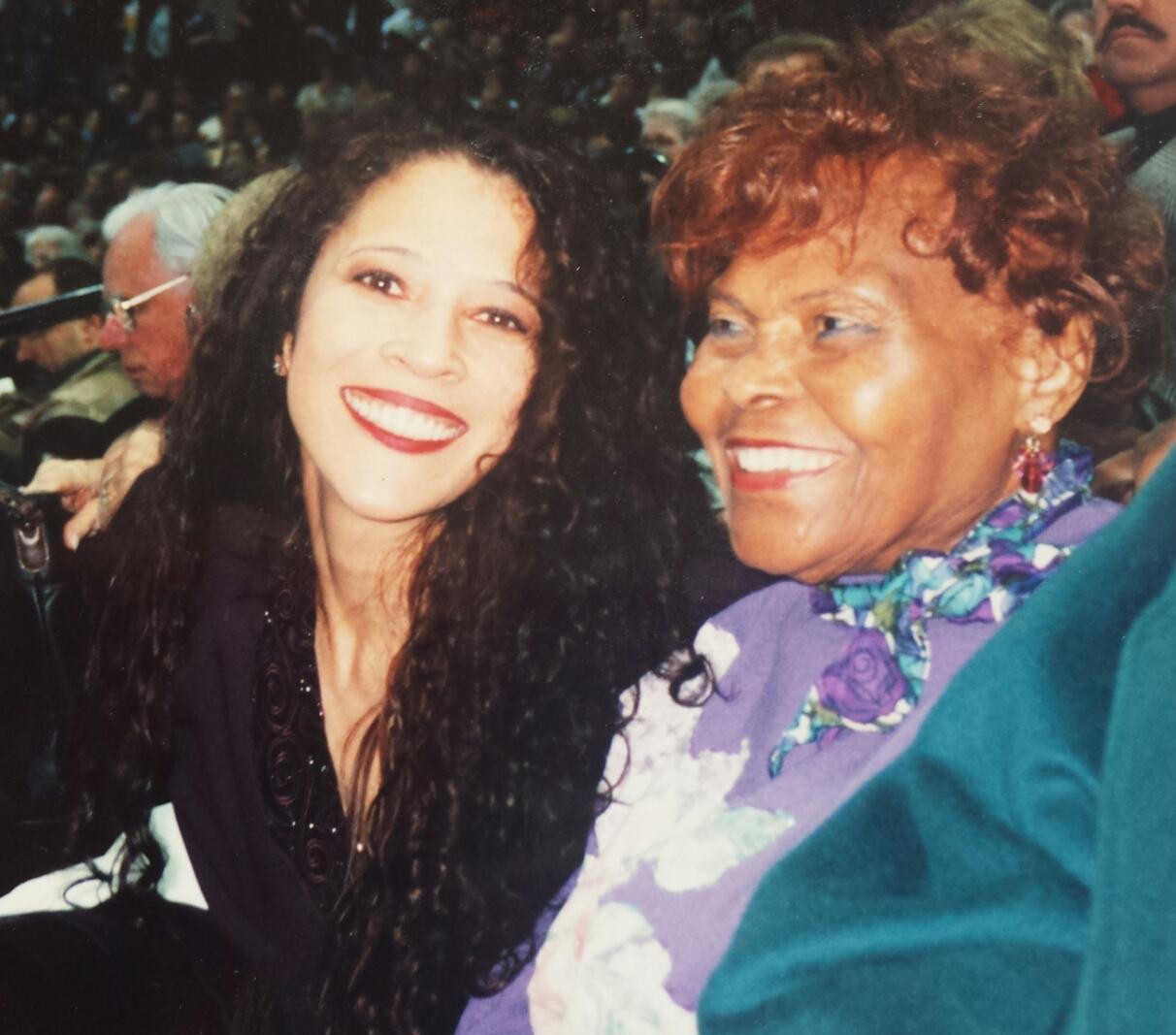 Tai Babilonia continues the legacy of her mentor by supporting minority athletes and skaters. She works with Ready, Set, Gold!, a non-profit health and fitness program that matches Southern California Olympians and Paralympian athletes with schools in Los Angeles. “We emphasize the importance of goal setting and self-discipline while encouraging students to achieve their goals,” she says.

Tai also lends a helping hand to other causes she cares about. She volunteers with the Hollywood Food Coalition (HFC). The HFC gives hot meals to the homeless and hungry in Hollywood. “Hollywood has a special place in my heart because it’s where my father was stationed when he served with the LAPD and it’s where I was born,” she explains. “The homeless situation here is so sad and heartbreaking.” 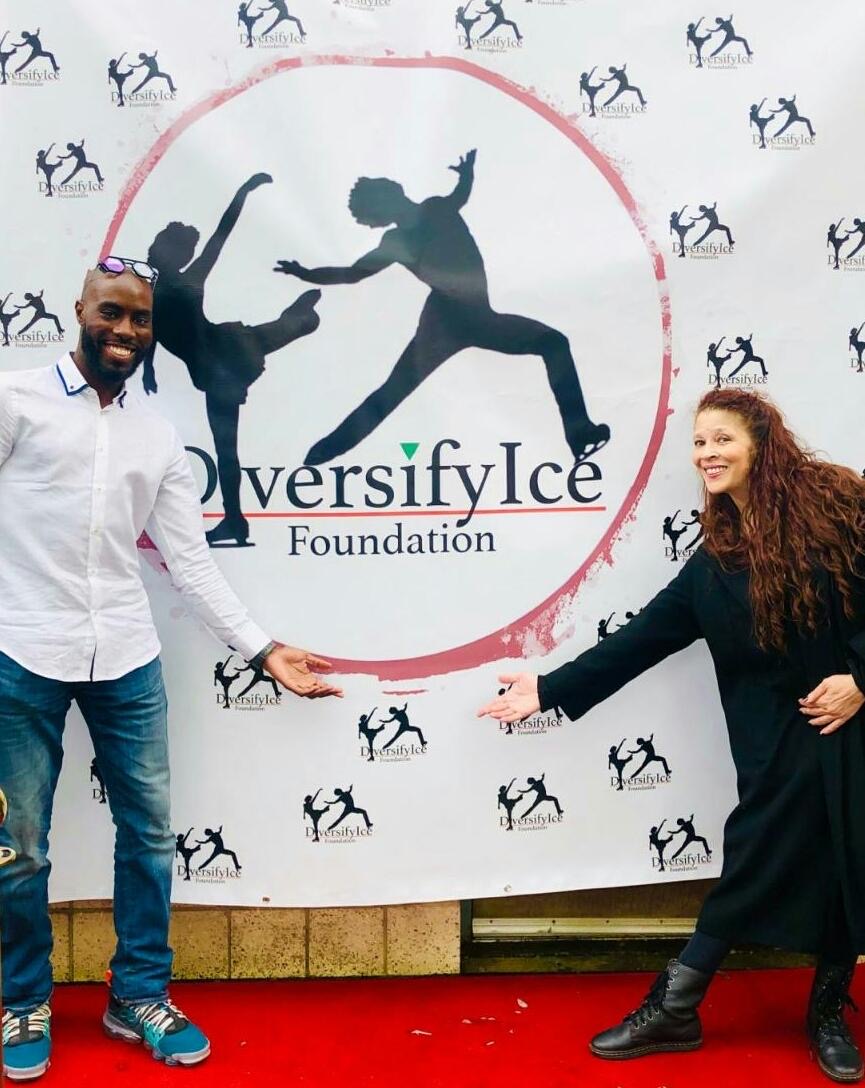 Tai Babilonia with Joel Savary, founder of Diversify Ice. Tai was his guest at the Diversity Ice Foundation fundraiser in January 2019.
Photo courtesy of Tai Babilonia.

In January 2019, Tai was invited by Joel Savary, the executive director and founder of Diversity Ice, to be a guest at their Diversity Ice Foundation fundraiser. The organization provides scholarships, mentorships, and networking opportunities for minorities in figure skating nationwide. “Being associated with Diversity Ice has given me the chance to share the Mabel Fairbanks legacy with future skaters of color,” she says. “I will continue to support and help create new and meaningful opportunities for the next generation of skaters.” The time to celebrate people of color’s contributions to figure skating is now. Tai Babilonia is creating a space for their stories to be heard, respected, and revered.