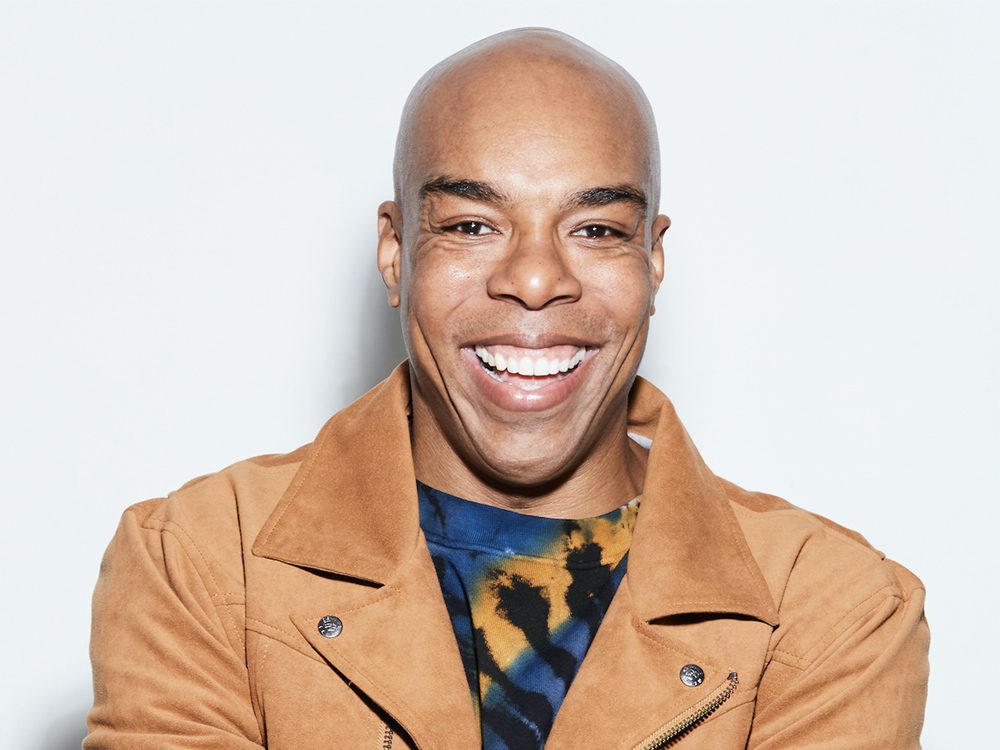 “I don’t know the rules that you live by, so I break them.”

Chris Denson watched a lot of stand-up when he was younger. He was a latchkey kid and when he returned home from school in the afternoon, he would turn the channel to Caroline’s Comedy Hour and Def Comedy Jam. He didn’t know it then, but he was enamored with the way the comedians used observation to explain universal experiences like romance, food, or the mundane details of everyday life. “I had a lot of guys and women that I liked in that space. Comedy was something I actually ended up doing for about seven years after I graduated high school,” he says. “So it led me to Los Angeles. It led me to California and it set me off on the path I am on now.”

In the early days of his career, after graduating from Michigan State University with a degree in packaging engineering, Chris worked as an engineer for Daimler-Chrysler. It wasn’t too long before he realized it wasn’t the right fit, so he left to pursue a career in the entertainment industry. His coworkers weren’t so understanding about him leaving. “It was this midwest, ‘I can’t believe you are going to change your life’ type of thing,’” he jokes. But his boss’ reaction was different. She had a best friend who lived in Los Angeles and had connections within the industry. While this connection didn’t go as planned, Chris was now in the perfect location to express his creativity. 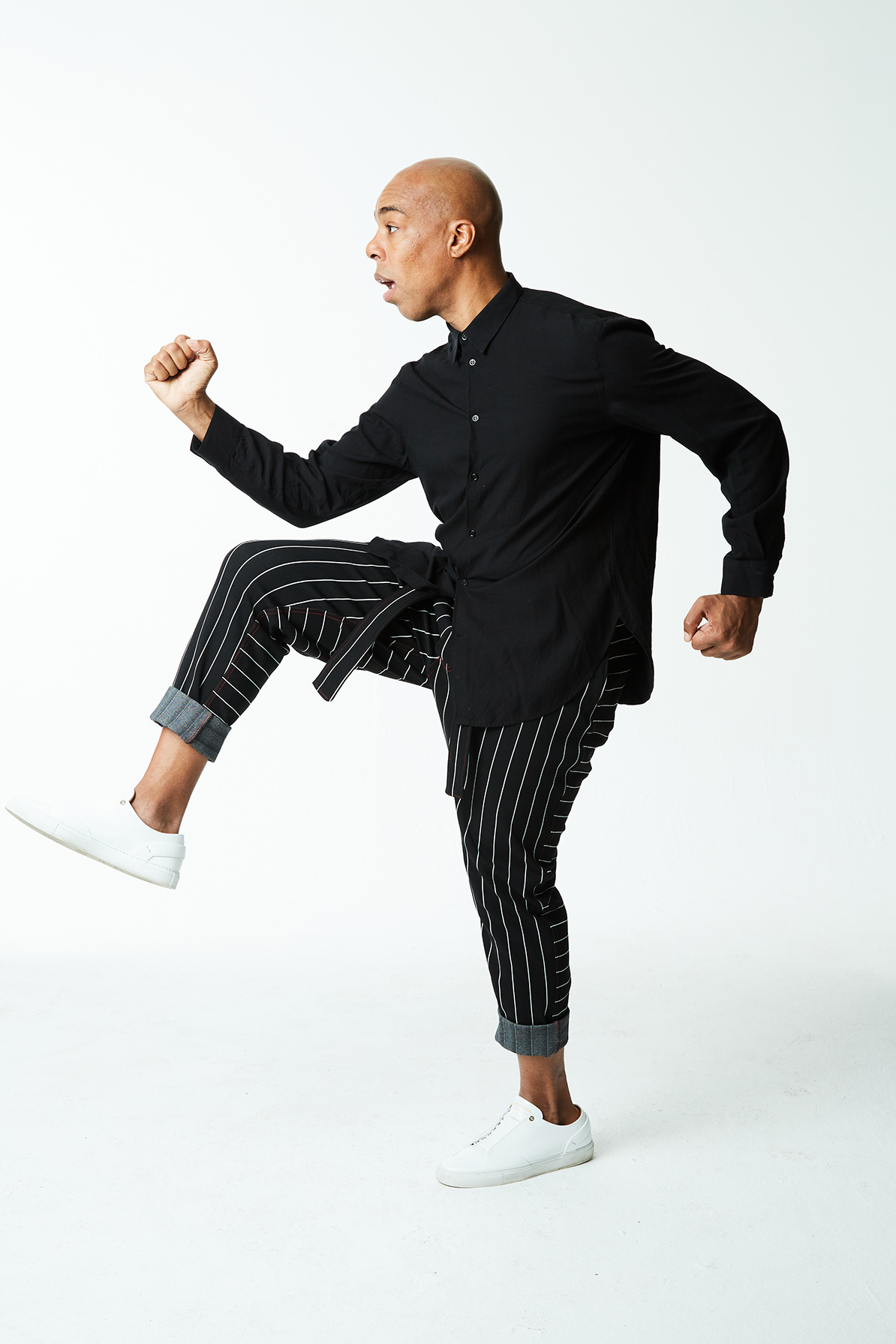 In Los Angeles, Chris made a name for himself as a producer, writer, marketer, and host in the media/entertainment space. He worked for companies like Paramount, BET, Playboy Television, Machinima, and Pluto TV and has partnered with platforms like Art Basel and Fast Company on content creation. But one particular moment stood out for Chris and changed his career trajectory. He got a job with the American Film Institute’s Digital Content Lab. He describes it as a “think tank for the marriage between technology and entertainment.” He admits that he took the job reluctantly, but it allowed him to find his spark. He was working with some of the top networks, content makers, and video game platforms. He found himself around some of the smartest and most creative thinkers he had ever met. This satisfied his attraction to business ingenuity. “The relationships that I have till this day have come out of trying to think outside of the box and being inspired by what other people are doing and finding some connective tissues,” Chris says.

Putting these connective tissues together, Chris launched the podcast Innovation Crush in 2014. He describes the podcast as a mix between Fast Company and the Daily Show. It went on for nearly seven years and amassed 750,000 subscribers and inspired a #1 best-selling book on Amazon. “I got to be silly and goofy but also have really smart conversations with some of the best people in the world like Janice Bryant Howroyd, Steve Wozniak, Jean Case, Nolan Bushnell, and a lot of pioneers in their respective industries,” he recalls.

“The relationships that I have till this day have come out of trying to think outside of the box and being inspired by what other people are doing and finding some connective tissues.”

Looking over his career, Chris feels like 33 is the age when you reconnect with your inner thirteen-year-old. He thinks about his mother who met his dad at 13, got married at 18, and was married for 16 years. At 33, his mother’s curiosity resurfaced again. She took belly dancing lessons, eventually taught at colleges, went roller skating, and as an elder, participated in the Senior Olympics as a dancer. Chris calls this curiosity an “appetite for exploration” and this appetite developed in him as well.

However, his “appetite for exploration” came with a sense of otherness. “Along the way you sometimes feel like you don’t belong, especially on paper in certain environments,” Chris says.  In 2020, his 48-hour think tank GovCity was honorably mentioned as a Fast Company World Changing Idea. Chris and Molly Cain, who was director of ventures and innovation for Homeland Security at the time, came together to create a “curated society” between government, business, and community.

At GovCity, Chris found himself working with government agencies, companies, and the Los Angeles and New York City mayor’s offices. He had never worked in government, so he wondered how he would fit into all of this. But he used this to his advantage. “I don’t know the rules that you live by, so I break them,” Chris explains. “And to the right teams and individuals that is a very exciting value proposition, but it doesn’t work for everyone. It can be a low percentage of conversion but the ones that do convert, become really amazing opportunities. My confidence came from an ‘I don’t know exactly what you do but I know what I do’ mentality.’” 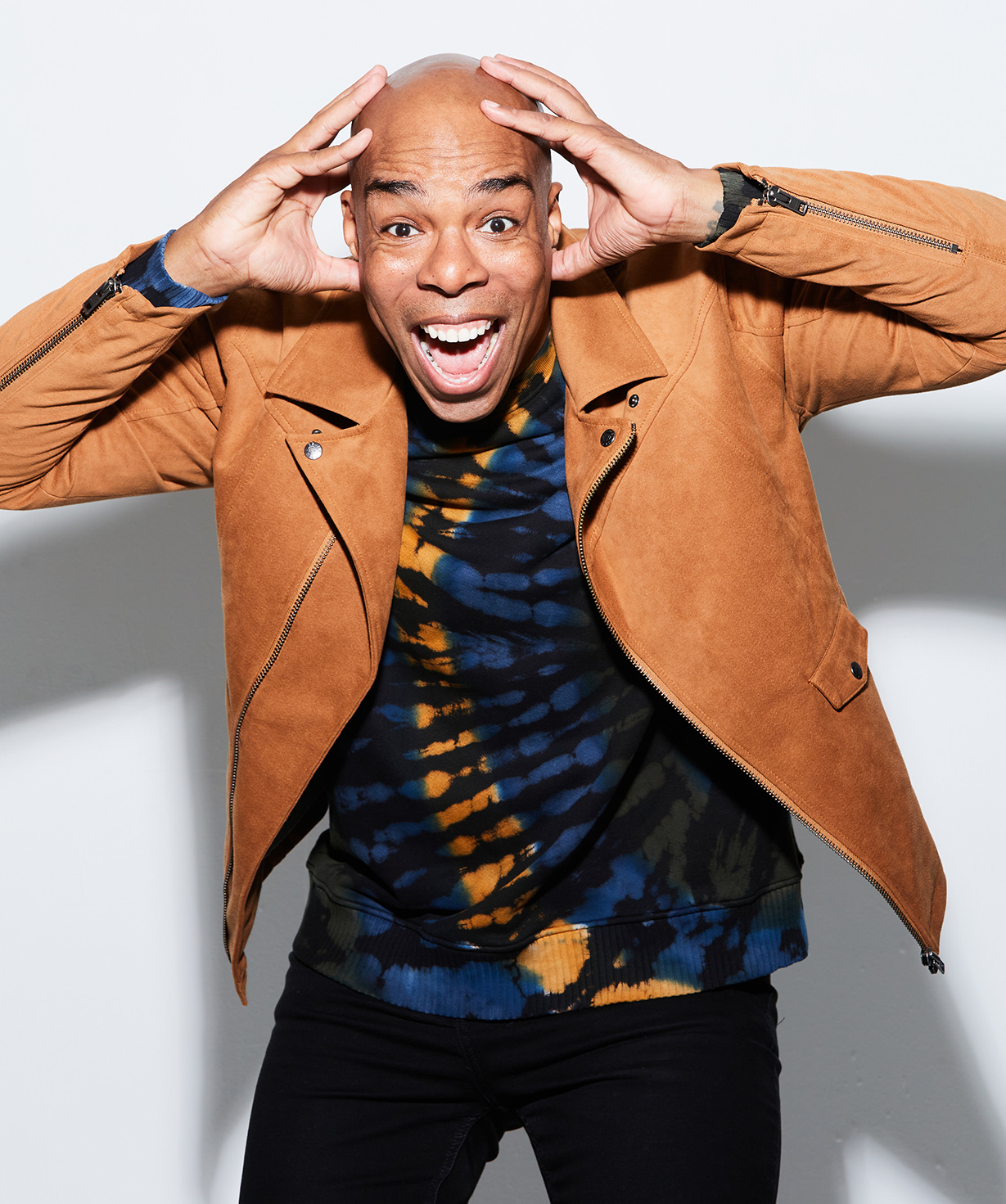 Being an outsider has led Chris to relate to those who move in spaces that are not necessarily thought of with them in mind. Chris’ first celebrity interview for Innovation Crush was with rapper and entrepreneur Chamillionaire. They discussed Chamillionaire’s “graduation” from hip hop to business. He was the first entrepreneur-in-residence at Upfront Venture in Los Angeles. He was one of the earlier investors of Maker Studios and is an owner of a host of car lots and beauty salons. Chamillionaire explained to Chris how there was a public perception that he fell off career-wise. But Chamillionaire simply pivoted in a new direction. “This kind of response happens when you evolve and innovate,” Chris says. “Which is something we all want to do. We all have some aspiration that doesn’t necessarily align with what our past history may indicate.”

In Chris’ many interviews, there is always a lesson to be learned. A lesson he and his audience can take with them. He recalls his interview with author, mentor, and criminal justice advocate Shaka Senghor, a fellow Detroiter. At the age of 19, Shaka Senghor was convicted of second-degree murder. Turning his life around, his story of spiritual redemption has led to him becoming a New York Times best-selling author, calling Oprah a best friend, and talks at universities to tell his story about ways to fix our criminal justice system.

“You are not going to be the same person you are tomorrow as you were ten years ago, five years ago, or sometimes even last week.”

“We have sons that are around the same age. And come to find out he lives around the corner from me,” Chris says. “He was saying as a parent, there is a generational difference between us and our kids. In today’s culture, kids are exposed to so much all of the time. And so they have different entry points. I even picked up on a lesson on how to be a better Dad by chatting with Shaka. In his case, he is applying the fatherly wisdom he didn’t have with his older son to his younger one, age 9, because he was in prison for most of his older son’s life. I have an older child and I have a younger child. I think about what I would do differently and how I can show up differently and still make an impact. How do I abandon my own beliefs? What have we unconsciously agreed to as an operating system for ourselves that may not fit or work in today’s society and who you are as a person?”

Chris jokingly advises young people who want to work within media and entertainment to not do it. In all seriousness, he advises young people to be smart with their money because when starting out, they will hear a lot of no’s that can set them back financially. “There is a lot of waiting and hurrying up and waiting,” Chris explains, “No matter your craft or skill level or whether you are in development or in front of or behind the camera, creative projects come and go. I’ve worked on pilots of shows that didn’t go anywhere. I worked on seasons of programs that suddenly ended. You have to make sure that you are being smart about this kind of thing.” 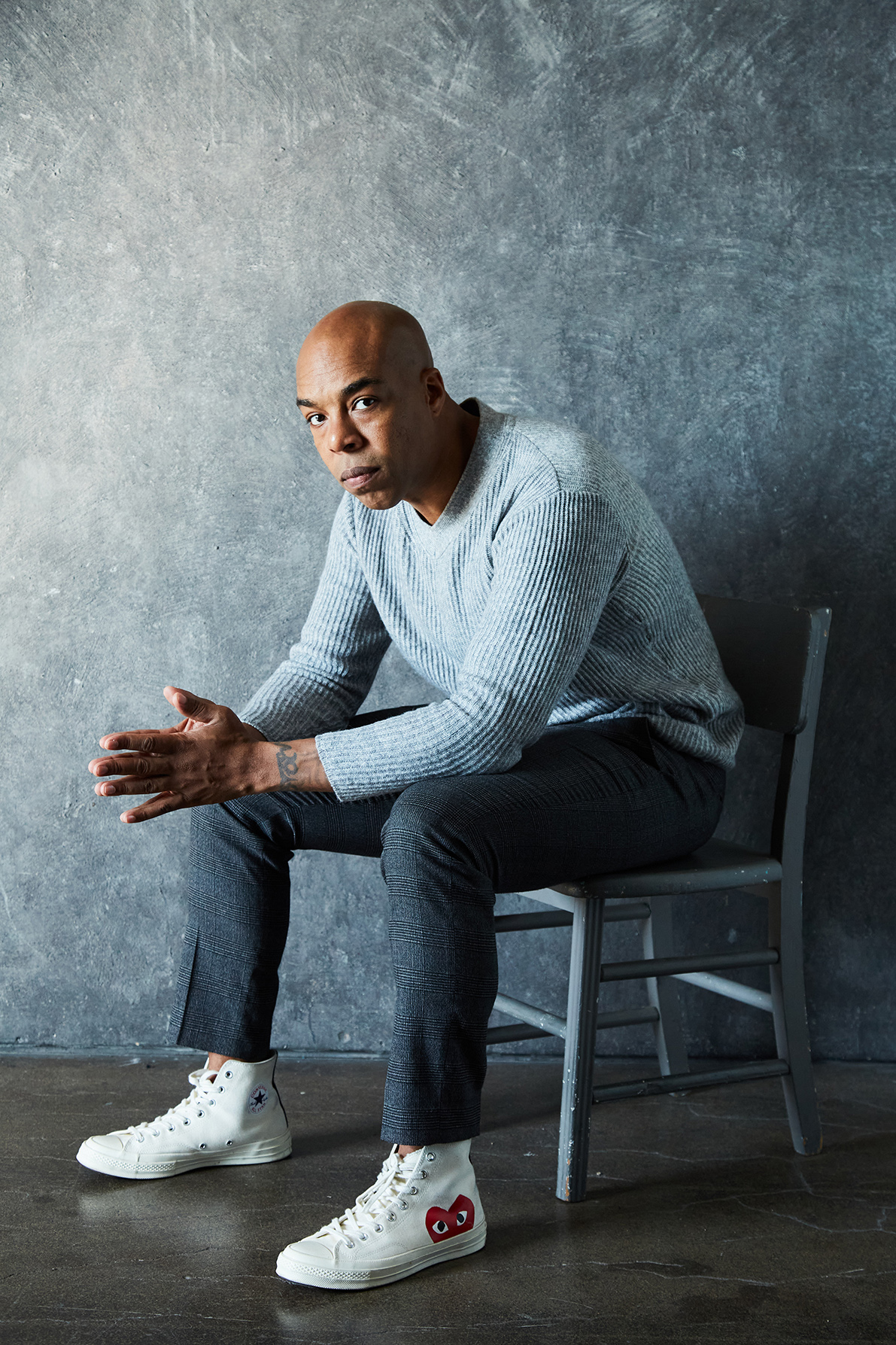 Chris admits that the entertainment industry is subjective when it comes to what content gets the green light and what doesn’t. “I’ve gone through multiple bouts of imposter syndrome and the need to reconcile and be very deliberate in how I want to show up,” he explains. “Because you can get lost in someone else’s expectations or someone else’s feedback. Feedback is great. You have to learn how to be able to adjust, but you also have to do what feels right for you, in the end, no matter what feedback or response you get from the industry.”

But he also wants young people to be open to change. “You are not going to be the same person you are tomorrow as you were ten years ago, five years ago, or sometimes even last week,” Chris says. “Your appetite or approach might change. Emotional intelligence is not as often addressed as it should be.”

“I really get inspired by people who don’t have any business doing what they are doing and they do it anyway.”

With a new season of the video series The Work In Progress with Fast Company now available to watch, Chris is proud of the work that he has done. “We had a bunch of really great guests from the CEO of PayPal and celebs like Taraji P. Henson to a bunch of really great folks at Nike and so on and so forth,” he says. “We went into production in February and I am excited about it.”

Earlier this year, Chris interviewed former professional baseball player Micah Johnson. After retiring from professional baseball in 2018, Micah pursued a career as an artist. After learning about how to sell his art as an NFT from a patron who bought one of his first art pieces, Micah created and sold the NFT Aku, a Black boy in an astronaut helmet, to inspire kids to dream big. In 2021, Aku was the first NFT to be optioned for TV and film. In a way, Micah Johnson is the epitome of why Chris does what he does. “How do you keep learning and keep evolving and finding new passions?” he asks rhetorically. “Yes, there are pioneers of the industry. But I really get inspired by people who don’t have any business doing what they are doing and they do it anyway.”