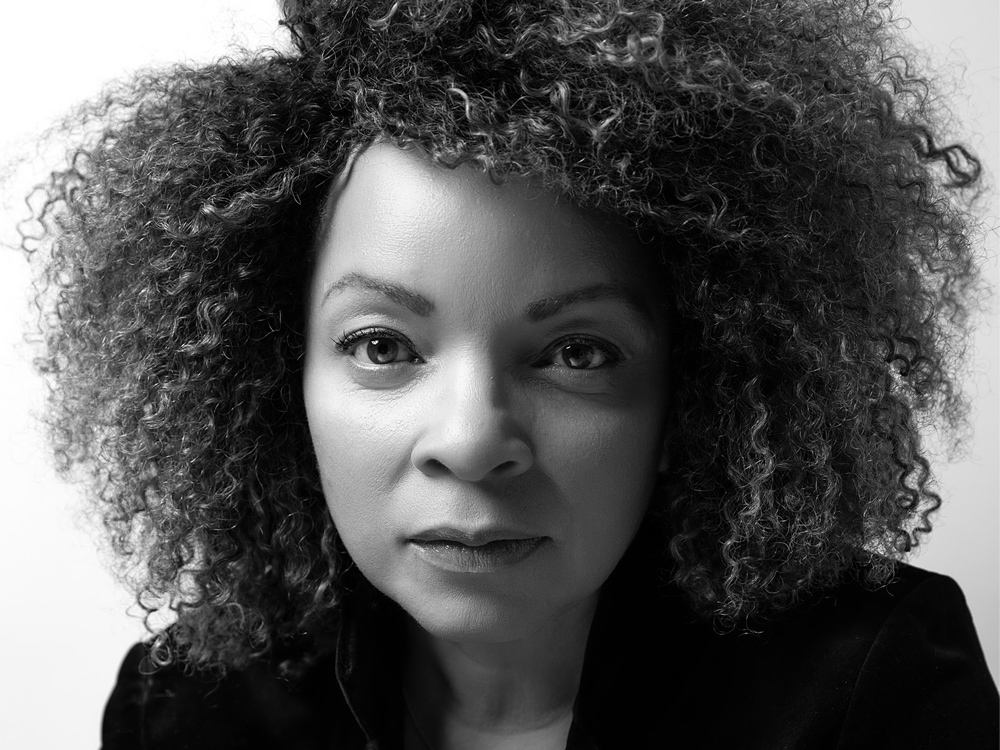 “I look at challenges as learning lessons that will make you stronger.”

Ruth E. Carter is the genius behind the Afrofuturistic costumes featured in Marvel Studios’ genre-defining blockbuster Black Panther. Growing up in Springfield, Massachusetts, a small town in western New England, Ruth Carter was in the perfect place to experience the beauty of the arts—it was a bus trip to Broadway in New York. Her brothers, Roy and Robert, were artists. Roy, the youngest would work with stencils and chalk. Robert, the eldest, an oil painter would work with oil and acrylics. Carter says, “Robert could do it all, Roy and I looked up to him and his ability to create such beautiful paintings.”

Carter would sneak into her brothers’ rooms to use their art supplies. She particularly took to the paper, chalk, and pencil work of Roy. By high school, Ruth was a drawer. “I could sit for hours and sketch. It wasn’t something that I ever thought of as artistic, I just wanted to do what they were doing,” Carter explains. 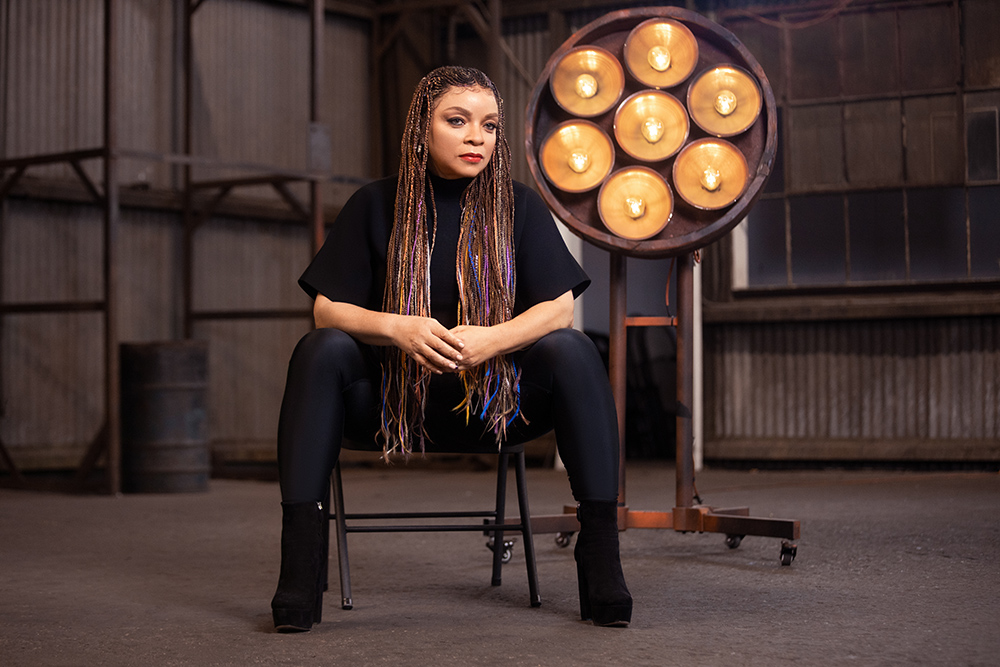 After graduating from college, Carter interned with CityStage in her hometown and then moved to New Mexico to intern at the Santa Fe Opera. Carter then moved to Los Angeles to work in theatre. Carter first met Spike Lee at the Lula Washington Dance Center in Los Angeles after she was introduced by a college friend. Carter was there to do theater, so she did not have working in film on her radar, but Spike Lee encouraged her to get some film experience by working on students’ thesis projects at USC or UCLA. She listened and worked on a film with a USC student. Lee then hired her to be the costume designer for School Daze.

“No matter what, throughout your career you get challenged by all kinds of outside forces and opinions.”

Throughout her career, Carter has had moments that seemed almost dreamlike. Like the time she sat across from Betty Shabazz on the set of Malcolm X or when she was in the sitting room with Ruby Dee. Or the time she had to meet Tina Turner in the crew parking lot because she had to get a dress for Angela Bassett in What’s Love Got to Do with It?

“These are moments that I feel connected me to the art and purpose of what we were doing and why we were doing it,” Carter says. “When you are in the middle of the desert in Egypt and the pyramids are in the background and you are helping Denzel Washington with his headpiece for Malcolm X, those are times when you go ‘ok this is real.’ This is special and I’ve made it.” 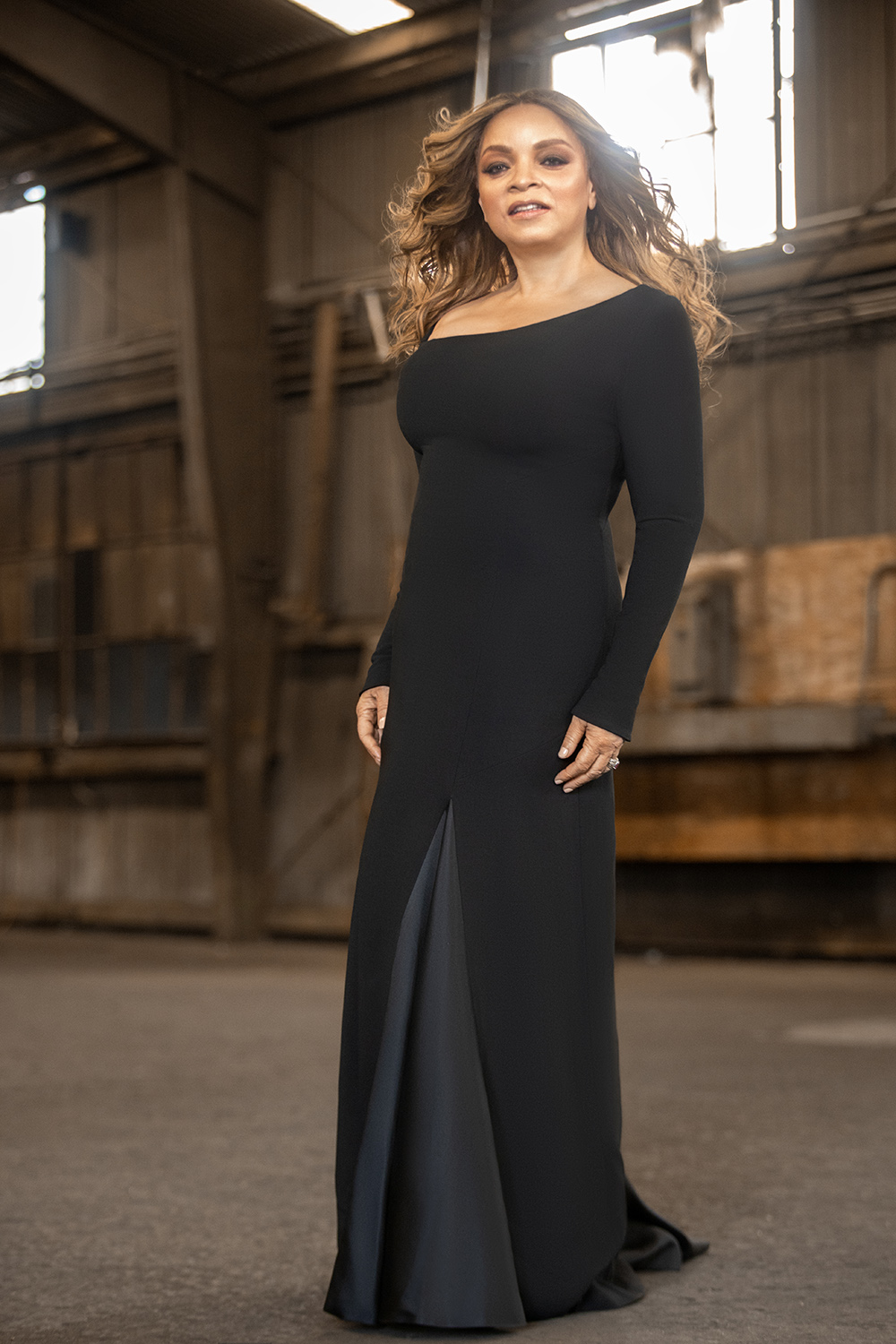 Carter recalls a conversation with Barry Alexander Brown, Spike Lee’s go-to editor. Brown was only 19 when he was nominated for an Oscar for his first feature-length documentary, The War at Home. Carter had asked what it felt like to be nominated. Brown simply told her that she will get hers and to not give up. “Not to give up was something that resonated with me,” Carter says. “No matter what, throughout your career you get challenged by all kinds of outside forces and opinions. There are times when you want to give up. I look at the challenges as learning lessons that will make you stronger.”

“I have never worked on a film that has impacted children and families like Black Panther.”

In 1993 and 1998, Carter was the first African American to be nominated by the Academy for Best Costume Design for Malcolm X and Amistad. A little over 20 years later, Carter became the first African American to win the Academy Award for Best Costume Design for her work in Black Panther. Working on Black Panther was a special moment for Carter. “Black Panther was an accomplishment for the culture,’ she says.

The cultural impact of Black Panther was something Carter had never experienced before in her career. “I have never worked on a film that has impacted children and families like Black Panther,” Carter says. “I felt like I was a shepherd for Ryan Coogler’s vision. This alignment made a big difference in what we were doing, why we were doing it and ensured Black Panther was the way it was intended to be seen.”

Carter believes Black people, specifically Black children, were ready for a superhero that looked like them. “The Dora Milaje, the all-female army of Wakanda, inspired little girls,” she says. “They didn’t have to put on a bikini or cheerleading skirt to be a superhero. They could actually put on their tights and go kick some butt.” For those outside of the culture, Black Panther showcased that Africa isn’t one monolithic place. “Now when you see women in a gele with Ankara fabric, you say ‘West Africa.’ When you see someone with belly rings or their neck rings and arm rings as a fashion statement, you say ‘South Africa.’ You just don’t say Africa anymore. That is Afrofuturism for millions of people to understand,” Carter explains.

When Carter is asked to mentor young creatives, she looks for those who are either in school or are in independent film. “Whether it is a one-woman show or a theater piece, you have to gain some kind of experience,” she says. Carter suggests volunteering or an internship at a theater company. This gives those interested an opportunity to see if they have a true love for the job. “The only way you are going to find out if this is for you is to educate yourself in school, take the classes, major in costume design, and then intern at a theater and get some hands-on experience. You will then know what your next step is,” Carter explains. 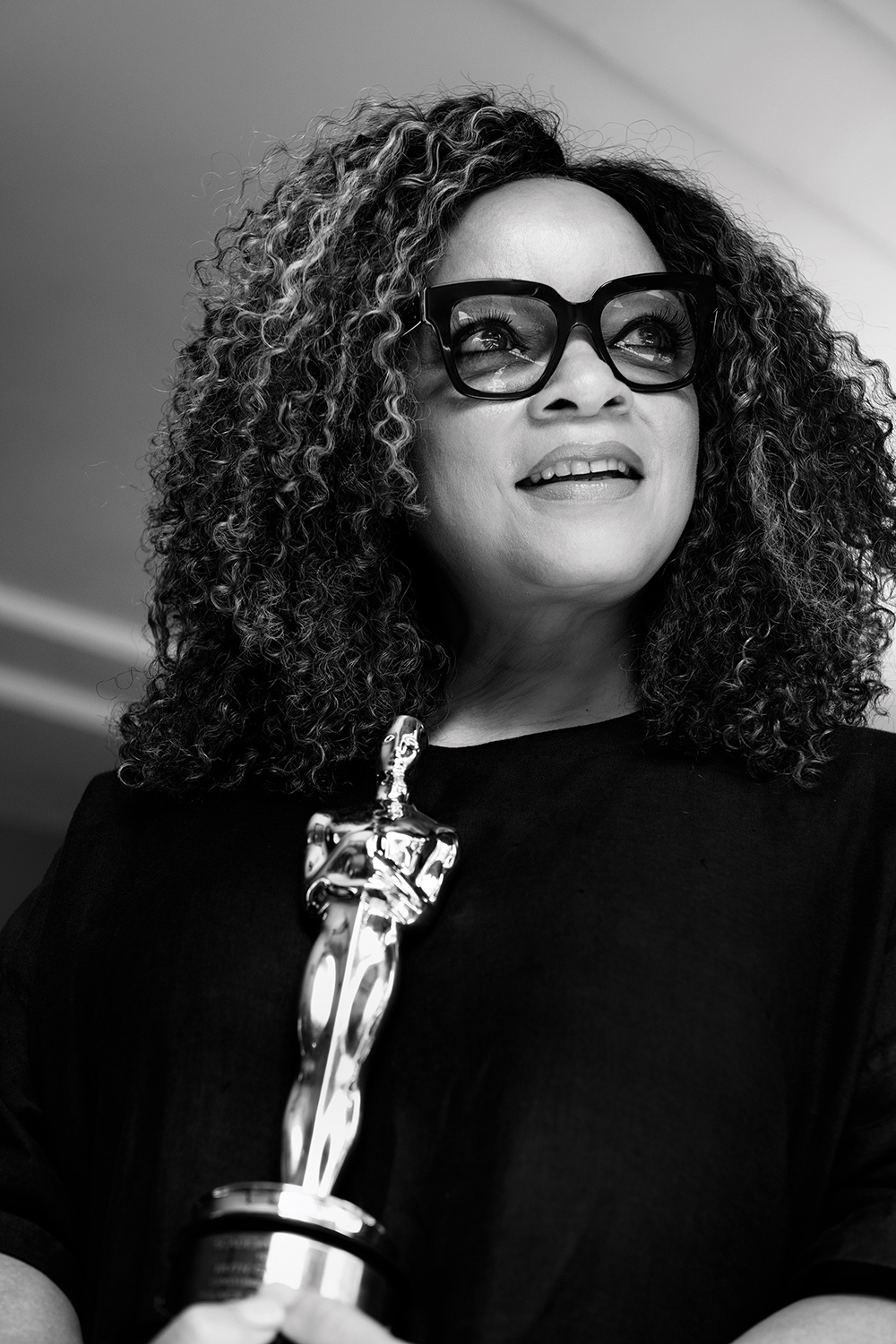 Carter became the first African American to win the Academy Award for Best Costume Design for her work in Black Panther. Photo by Betina La Plante.

Many who call Ruth Carter a mentor have had major successes in the industry. Derica Cole Washington, who assisted Carter on the set of Selma, was the costume designer for A24’s Zola, in which she was nominated for a Costume Designers Guild Award for Excellence in Contemporary Costumes. Tanja Caldwell assisted Carter on Black Panther, Coming 2 America, and this month’s Black Panther: Wakanda Forever. Marcy Rogers who interned with Carter on Chi-Raq was afforded the opportunity to be costume designer for last year’s Passing. And Frank Fleming, who got his start by interning with Carter on Malcolm X, was the costume designer on all the seasons of Power. Carter says. “I am so proud of them. They all have a really great eye and aesthetic.”

Carter’s traveling exhibit, Afrofuturism In Costume Design, gave the public an up-close look at the costumes that they’ve seen on screen. “It is an exploration of my career,” Carter says. “It is 35-plus years in the industry and there are costumes from Do the Right Thing and Roots (2016) and Amistad, Dolemite Is My Name, Coming 2 America, and Black Panther.”

Carter plans to produce another exhibit of fitting photos that she has taken throughout her career. “I just happened to save polaroids, which will also include reimagining my experiences by painting and sketching some of my favorite fitting photos.” 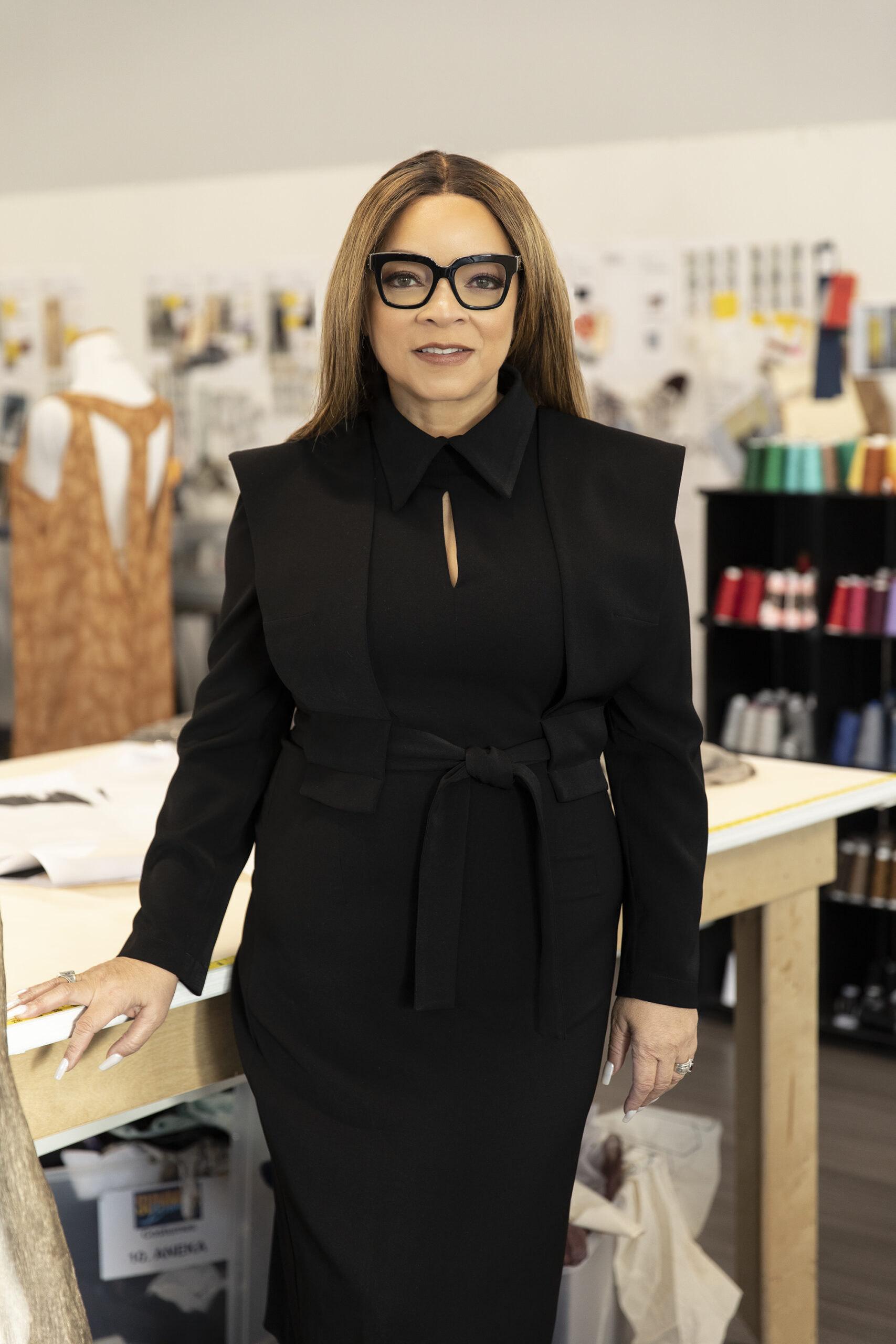 In a recent interview with Variety, Carter explained how Black Panther: Wakanda Forever would honor the legacy of the late Chadwick Boseman, who tragically died of colon cancer in August 2020. She references the moment in the first Black Panther when T’Challa visits his father in the Ancestral Plane and he is wearing white. “White is a color that’s worn in a lot of funerals in Africa — it’s either bright red or it’s white — and we chose white because it connects us to T’Challa and to Chadwick,” Carter said.

Throughout her career, Carter has had a deep understanding of history and culture that is captured so elegantly in her costume choices. These fixtures of our past, present, and future should make us all proud.