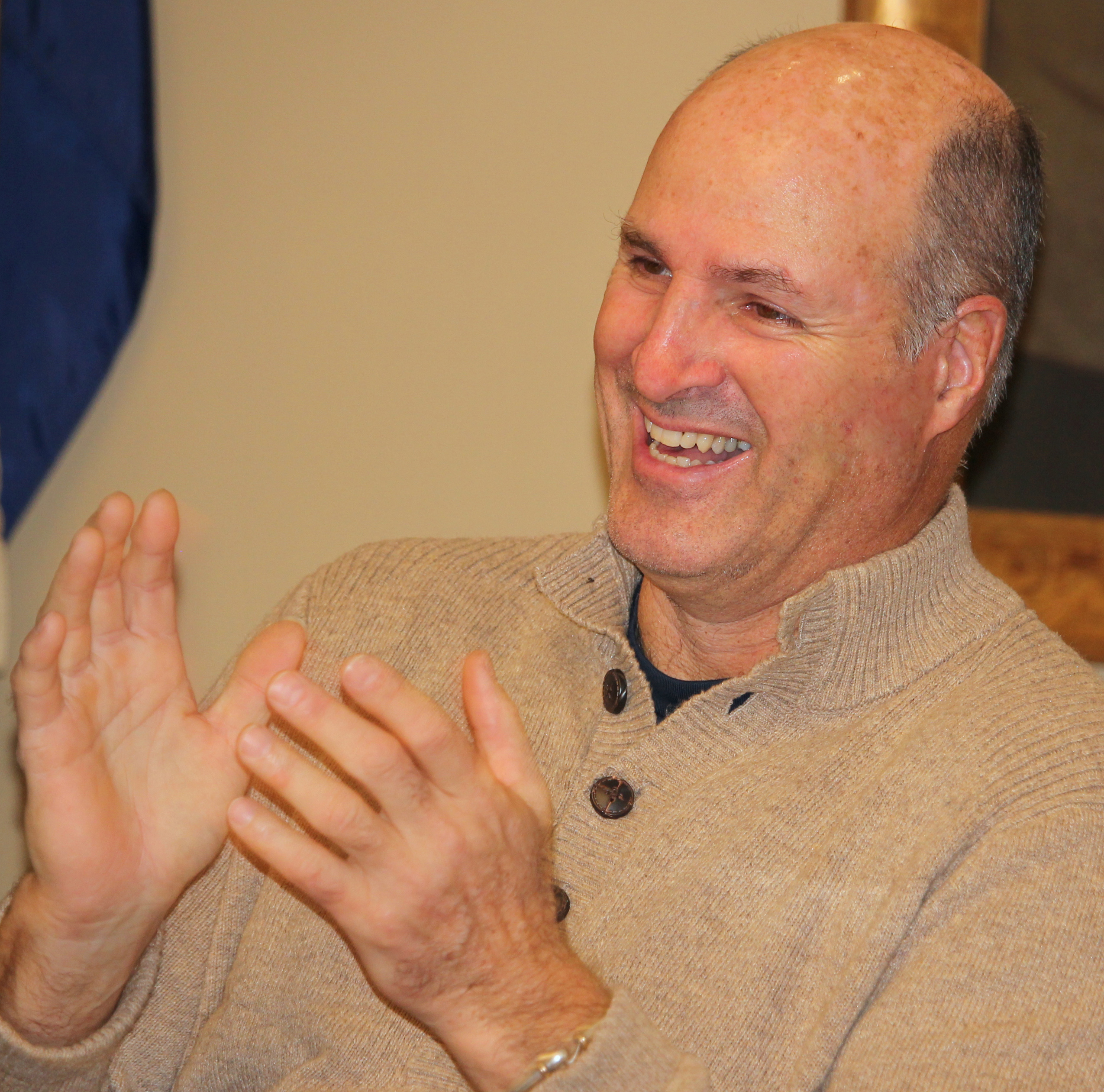 “Whatever you are writing about, you want it to be authentic.”

David L. Robbins, the son of WWII veterans, went through boyhood with the feeling of otherness. This resulted in a profound sense of him wanting to do good by others. Growing up in the small town of Sandston, Virginia, David was tall and talkative but ethically and culturally different than his peers. He and his family were the only Jews in town. “My skin’s white, as white as theirs, but I was different,” he recalls. “Growing up in East Richmond in the late 50s and early 60s and going through my boyhood was an education in how to navigate differentness and otherhood. I have not ever forgotten those lessons and sympathies.”

Towards the end of WWII, his Dad developed multiple sclerosis. This led David to question the very notion of what masculinity is. “My father was a strong powerful dude. You didn’t want to mess with him,” he says. “But because of his malady, he needed courage beyond being a father and husband.” David never saw his father run, only limp. No matter the circumstances, his father got up in the morning to work multiple jobs and provide for his family. “Strength exists when it is tested, right?” David says. “You don’t know how strong you are until you pick something up. You don’t know how strong you are until you face a challenge.” To this day, David believes his father to be the “most consistently strong man” he ever met.

These moments of courage and strength surface in his novels. “My early life taught me to admire big thematic human characteristics,” David says. He isn’t interested in exploring the base desires of men—money, love, or fame. Instead, he writes about the kind of courage that someone needs to get through war or disease. In his own words, David describes himself as a “writer of themes more than plots.” 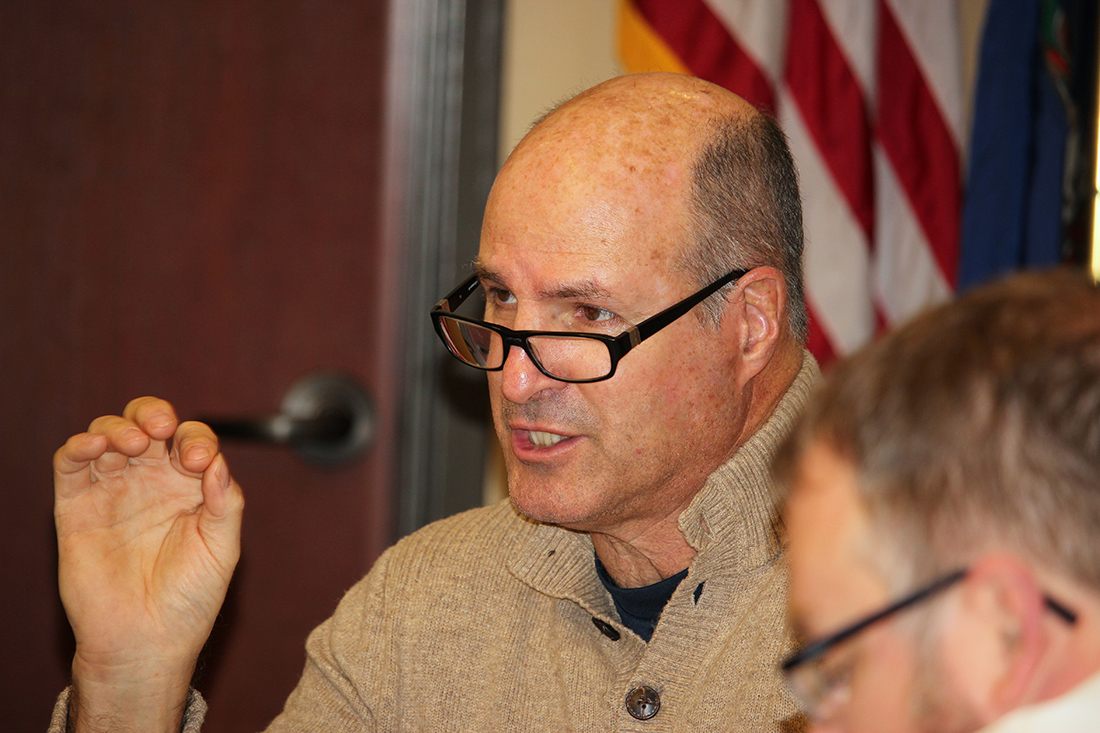 When David was beginning his writing career, he was offered the back pages of Style Weekly, Richmond’s alternative weekly culture and arts newspaper. He was appreciative but didn’t find much satisfaction in writing for a newspaper. “I wanted to see my name sideways on the spine of a book, and I was not going to settle seeing my name horizontal anywhere.” In 1999, when David’s first book War of the Rats was published, he felt like he’d made it. That was his goal, “to do nothing more than write stories for the rest of my life.” David has become much more than a New York Times best-selling author.

All of his success would be in vain if he did not give back. Service is a theme that came up frequently in our interview. “I believe my greatest achievement is getting off the merry-go-round of self-interest,” David says. With his platform and successes, he hopes to make an impact that outlives him. “I had an epiphany, and the epiphany led me to understand I don’t have spare time,” he says. “Everything in my life can be directed towards a goal. When I’m done with my work, writing, editing, and teaching, what’s left over is not something to waste. It’s a resource of time and money and heart that can be dedicated to the welfare of my community. It’s not excessive to care about the people in our community.”

David is well known for his work within the Richmond community. The Richmond Times-Dispatch named him 2017 Person of the Year honoree. In December of 2014, David read an online article about a writing program in upstate New York for military veterans to study writing with a college professor for a weekend. David thought he could create his own program that better served veterans. “These cats put on uniforms and trained hard and sometimes went overseas to do difficult things, and they just get a weekend?” He met with the executive director of the Virginia War Memorial to create a project that would go on for 12 weeks, similar to a college semester. David was already teaching creative writing at Virginia Commonwealth University (VCU). After talking to the Virginia War Memorial Foundation’s board, the project was a go. “Now, I had to do it.”

Now in its sixth year and impacting over 150 veterans, the Mighty Pen Project has not only been a success for David, but a cathartic experience as well. As David sits around the table with these veterans, he sees them tapping into their own hearts and bearing witness to each other’s experiences. He never tells them what to write. He says it would be wrong to do that. “It’s a self-guided tour—the healing is theirs, the stories are theirs, the catharsis is theirs. The writing instruction is mine. It’s really beautiful to see them band around each other and understand what each other has gone through. I couldn’t have anticipated that. I fully intend the Mighty Pen to outlive me.”

In 2019, David was having dinner with a friend, a former chair of the Richmond School Board, when an African-American police officer entered the restaurant and greeted her. She began to “gush” over the success of the Mighty Pen to the officer. Impressed, he said he would like to have a program like that for police and other public safety employees. David says, “Then I put my head in my hands and said, ‘I don’t have the time or the patience, resources or desire to do this. But dammit, now I have to.’” In April of 2020, David started Frontline Writers —a writing program similar to Mighty Pen for police, fire, and emergency services essential workers. “These people live traumatic, adventurous, and dangerous lives,” he says. “The writers share remarkable stories of human empathy and courage. You can just see the heads nod around the table. A cop will tell a story and a fireman will go ‘Yeah’ and a fireman will tell a story and an emergency medical tech will go ‘Yeah.’ They terribly need this program.” In the coming years, depending on resources and support from the community, David hopes to expand the Frontline Writers program to other professions of public service, people who might also deal with traumatic circumstances as part of their working lives, including nurses, teachers, social workers, even emergency room staff. 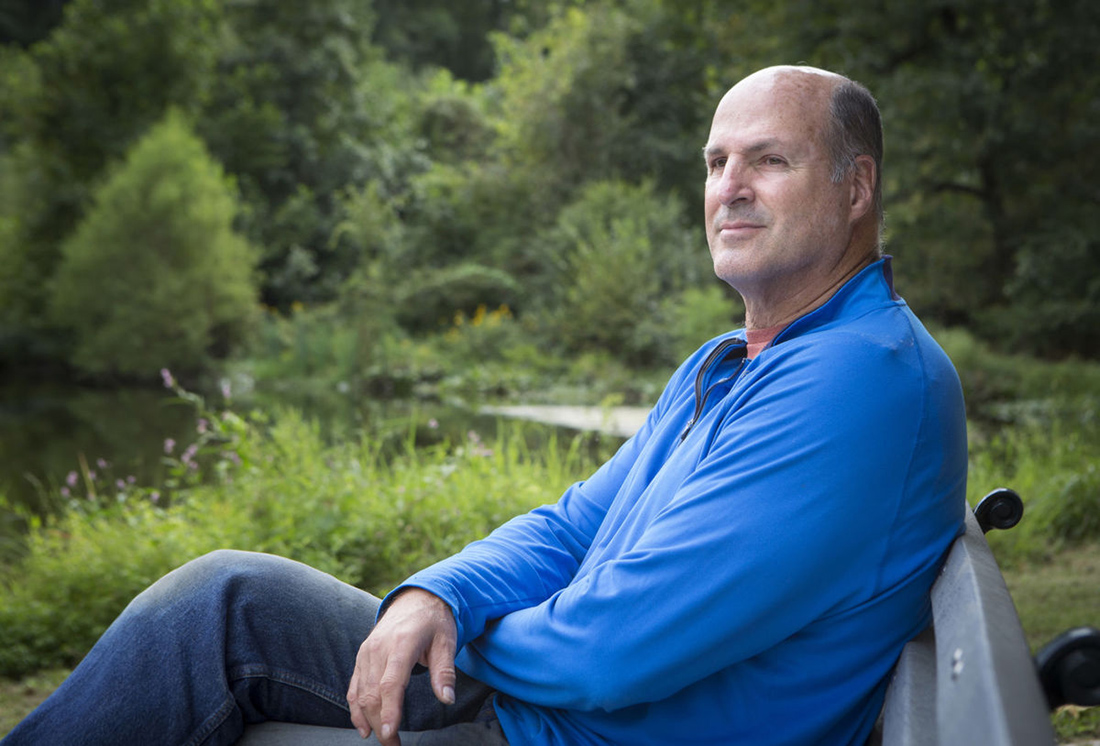 Before he starts to write, David does a lot of prep work. “The absolute last thing any writer should do is touch a keyboard,” he advises. “So much should come before you put words on the page. When I prepare, I don’t think about the plot first, ever. I always consider the theme. If you have a story you want to tell, you must isolate that part of the story first—like loss, grief, loyalty, courage – something your reader can recognize and share, something human and common, and often powerful.” He compares theme to a lighthouse. “If you have a beacon that tells you what your stories are truly about, you won’t ever get out of your path when the story gets foggy. It’ll help you make the right choices.”

Most of David’s stories revolve around moments in history. For research, he will read and notate dozens of books, scan the internet for images and testimonies, go to libraries and archives, always digging in the hope that his characters and the story’s smaller moments will emerge from the research. He recalls a time when he was on a panel with other historical writers and someone in the audience asked how much of what they’ve learned made it to the page. David asked the other two writers to write down what they thought that percentage was. All three wrote 10 percent. “You research to inform your character, not so much about what your character does or says but to fully create the world your character moves in.” Many of David’s novels revolve around the grand events of the mid-20th century. He will look through newspapers of the period for details like the price of pork or savings bonds or the most popular car of that year.

“I believe my greatest achievement is getting off the merry-go-round of self-interest.”

David also advises writers to travel, to visit the places they write about. “I’ve gone to some of the coolest, exotic, and weirdest places in the world just to sit on a hill and imagine a tank battle.” In fact, David literally did this when he sat on a hill in the middle of the Russian steppe that overlooked a sunflower field. “The Germans came from over here and the Russians came from over there.” This would be where the climax of his book Last Citadel, which dramatizes The Battle of Kursk, would take place. “You wouldn’t know the sunflower field was there unless you actually went there,” he says. “It’s an incredible scene. There is this beautiful juxtaposition of armor and men dying and struggling, blinded by these tall stalks of golden sunflowers.”

After the writer does all the heavy lifting, they’re then ready to write. David uses the example of a juggler to create an analogy about the role adequate research plays. “A juggler might have 10 items in the air but is only touching two at a time, while the others stay in his orbit,” he explains. “He knows where they are, but they’re free. That’s how research should work. You have to stay out of the way and only touch those bits of the story you need when you need them. But you must have it all there, ready to fall into your hands. That only comes from preparation, the reading, note taking, travel, interviews. Time spent with your chin in your palm.”

“I had an epiphany, and the epiphany led me to understand I don’t have spare time.”

Looking back at his work, David is proud of the oeuvre he has put together for readers to digest. “I feel like I’ve written a handful of definitive books,” he says. “I feel like the one I’m writing now could well be another. I accept that may be a literary pretension of mine, but I don’t want to write books that are easily disposable, as so much modern fiction tends to be. Historical novels give me the best chance of that.”

His latest, Isaac’s Beacon (to be released August 10 this year), is about the creation of the State of Israel. “I always wanted to write about this moment in history,” he says. “I’d read Exodus by Leon Uris, but I didn’t feel it aged well. It was written in 1959. I don’t think Exodus captured enough about the contemporary mindset of the short history of Israel. It’s truly a beautiful place, but it’s a hard land and people, and their story is really morally complex.”

Isaac’s Beacon focuses on the Deir Yassin and Kfar Etzion massacres, both taking place in 1948 just before the creation of the State of Israel. “If you look at Deir Yassin, it was a vicious act on behalf of the Jews. They just went nuts on an Arab village. Then weeks later, the Arabs did the same at a place called Kfar Etzion where they mowed down a couple hundred surrendering Jews. The story of Isaac’s Beacon revolves around the lead-up to these two events.” 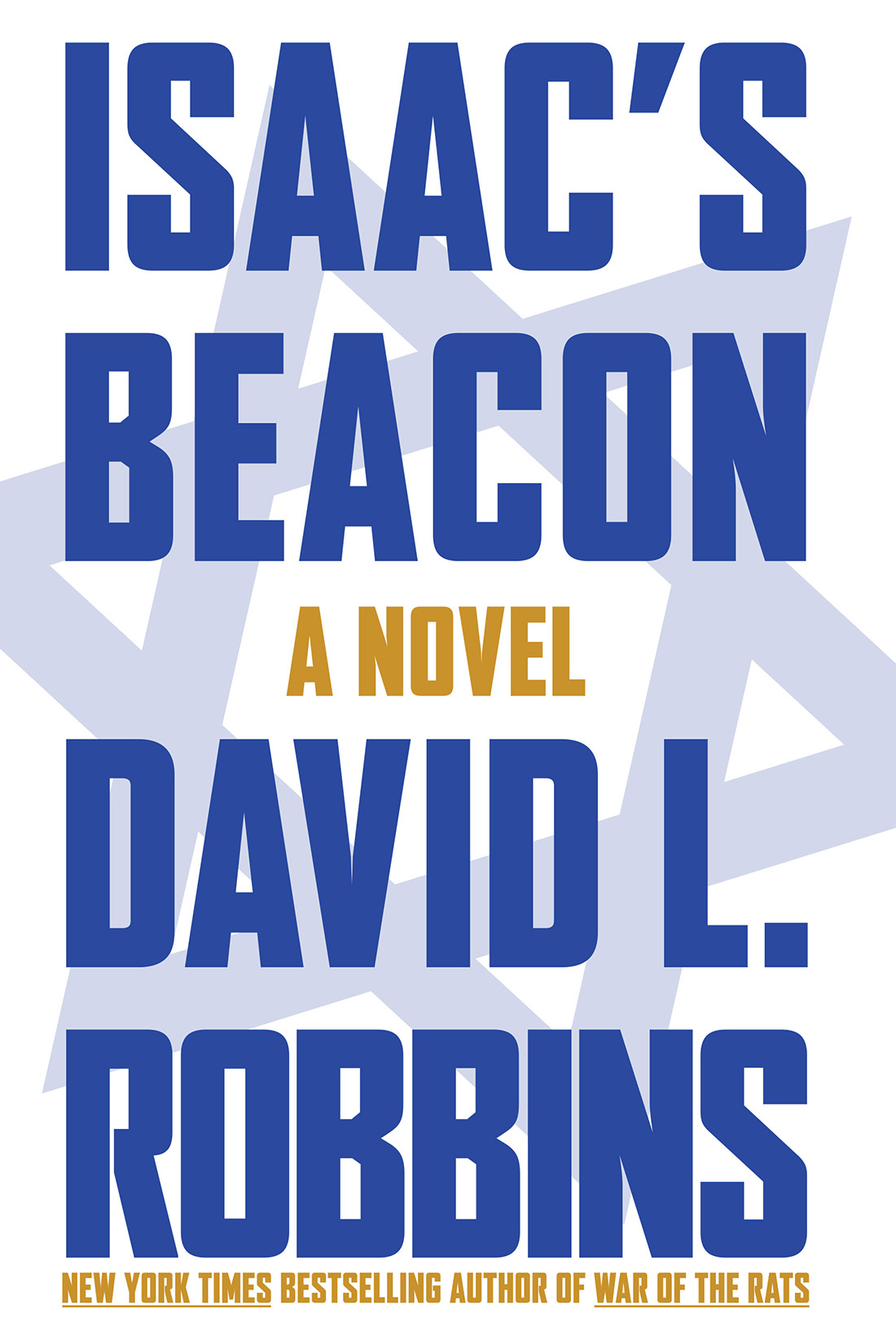 Isaac’s Beacon (Simon and Schuster) will be released August 10 this year.

When asked if he had further advice for aspiring writers, David stresses the importance of having tough skin. Learn to coexist with the word ‘No,’ and tell your story no matter what. “Don’t be dissuaded because of how difficult or hard it is. Trust me, little compares to somebody telling you they love your writing. It can sometimes be even better than saying you love me. To quote Henry David Thoreau, ‘Madam, you are holding the best of me.’ That’s what I try to put on the page. And when I’m done, what I try to bring to the rest of my day. The best of me.”