“Know what you will and won’t tolerate.”

Jacqui Coles is from Goochland County, Virginia, a small rural town in central Virginia, where “everyone knew each other.” Her mom was one of thirteen and Jacqui would spend almost every Sunday at her grandmother’s and Papa’s house. “We grew up surrounded by love and laughter,” she says. “We didn’t have a lot of money but as kids, we didn’t know how poor we were. I would often tell Mom to just write a check if I wanted something and she said we didn’t have the money.” Her mother was a voice of reason for Jacqui as a child and young adult. She taught her the golden rule and the value of one’s character. “She would say, not to me in particular, ‘You might be pretty on the outside, but if your inside is ugly then you ugly,’” Jacqui says. Growing up, Jacqui’s dream was to be either a model, hair stylist, or airline stewardess. When she was in the 10th grade, she attended the Richmond Technical Center for Cosmetology. She accomplished two out of the three. She went on to model for the Ford Modeling Agency (now Ford Models) in New York City and later, opened her own salon. With the support and encouragement of her mentors, Dr. Myles Munroe and Dr. Kingsley Fletcher, Jacqui also became a minister. 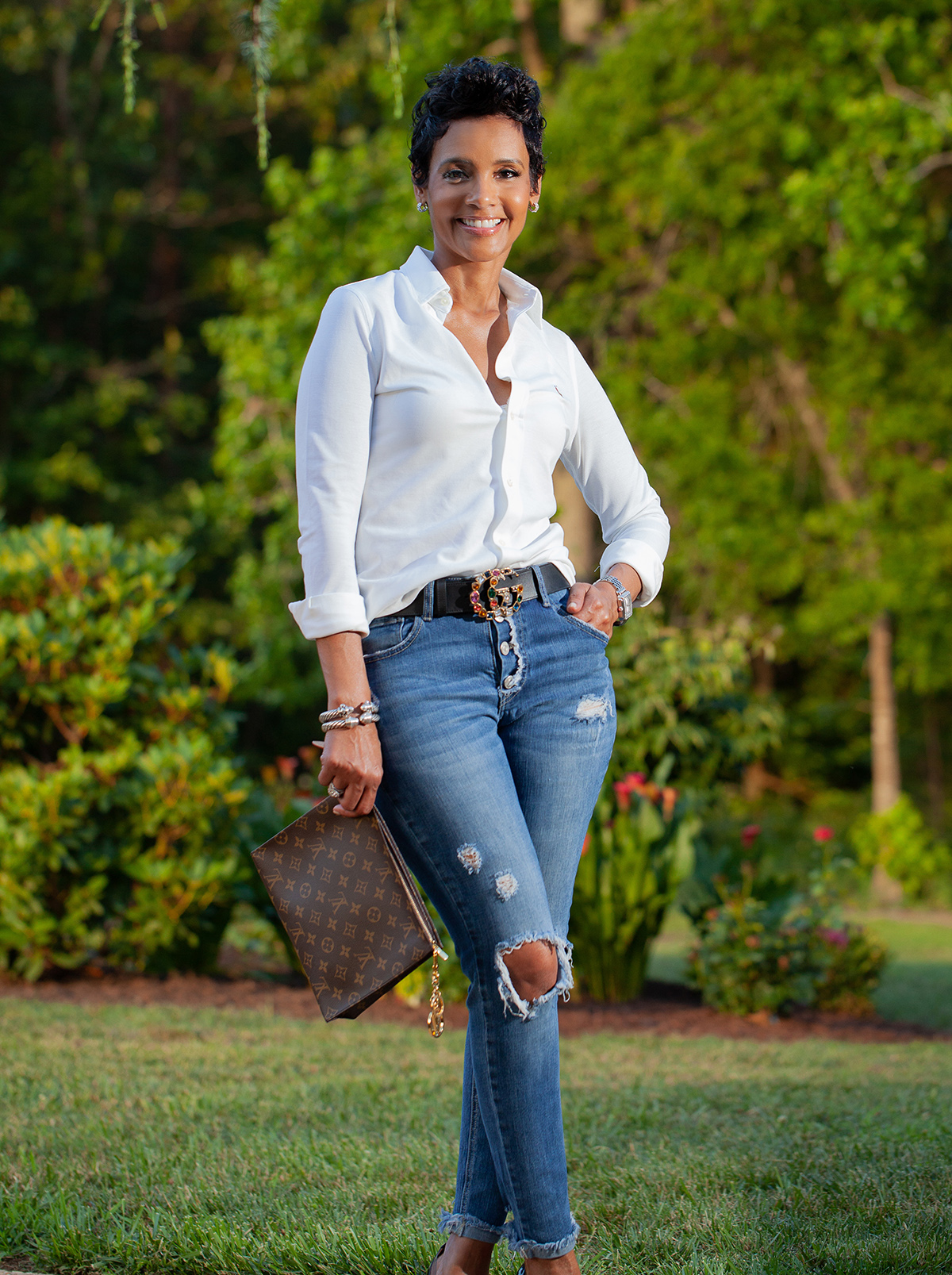 Jacqui does not just see herself as a salon owner or a hair stylist, but as a counselor. Her clients don’t just come in to look their best, but to learn and to share wisdom. While Jacqui is the one who is usually giving advice, her older clients have taught her valuable lessons. She recalls one client in particular who spoke about the loving nature of women. “She told me, ‘If you are dating someone, you need to date someone who loves you more than you love them,’” Jacqui says. “So many times, as women, we love people who don’t feel the same way and then try to change them. They never do.” While Jacqui believes her talent as a hair stylist and owner of a salon are her gifts to the world, she does not believe those things are her purpose. “Once I wrote my book, Do You Want His Will or Your Way, I began to feel I had a clear purpose on this Earth. I now feel like I’m on the right path and believe I can change many people’s lives for the better through my ministry,” she says.

Jacqui felt the best way to tell her story was through writing. Public speaking has never been where she has felt comfortable, even as a minister. “I always laugh and say that God has jokes,” she says. “I’m not big on speaking in front of a large crowd.” This truth is hard for people to understand, at least for those who know that Jacqui Coles was once a model and is now a minister. With her book, Jacqui could express herself in a way that was authentic for her journey. “My book gave me the chance to say a lot of things that God had said to me,” she explains. “My goal was to make my journey accessible to everyone. I made it a short read on purpose.” She understood the need to create a text that focused on the important messages in the Bible, but in a more accessible way. “Oftentimes people say the Bible is so big and long that it is hard for them to read,” she explains. “I really tried to highlight the lessons that changed my life the most.”

“Once I wrote my book, Do You Want His Will or Your Way, I began to feel I had a clear purpose on this Earth.”

Jacqui recalls a client who was a beautiful, young pageant queen. Jacqui taught her the importance of presence and how to enter a room. “Pull your shoulders back, hold your head up and walk,” she advised. “When you go into a room your mind has to say, ‘OK, I own this room.’ This doesn’t mean you are a conceited person. Inner confidence is the only way you’re going to grab that stage when you walk out.” Her client went on to be the first runner up for Miss Virginia and a couple of other pageants.

Jacqui blames poor use of social media and reality shows for too often limiting the scope of young women’s ambitions and creating a culture that rewards outrageousness. “Media teaches women to not look at themselves as the queens that they are,” she explains. “Some folk will do almost anything to get attention. I even tell my boys to draw the line with what you will and won’t do or tolerate.” When Jacqui was working as a model, she was offered a job for a smoking ad. “I don’t smoke but I was offered the job for $50,000,” she recalls. She didn’t have to go to casting. All she had to do was show up. She ended up turning the job down. “I didn’t want these young girls who looked up to me to think I did something that I didn’t do. They may not know that it was my job,” she says. Jacqui remembers when she was young, she wanted to be a smoker because she thought all of the pretty girls smoked and looked cool doing it. “I’ve always agreed with the saying, ‘If it cost you your peace of mind, it is too expensive.’” The temptation of money and fame can be tantalizing. Jacqui believes you have to have a sound moral compass. “If you wait until you are in a situation where the money is in front of you, a lot of times you will make the wrong decision,” she says. “It is easier to walk away when you have a set of values and morals as your guides.” 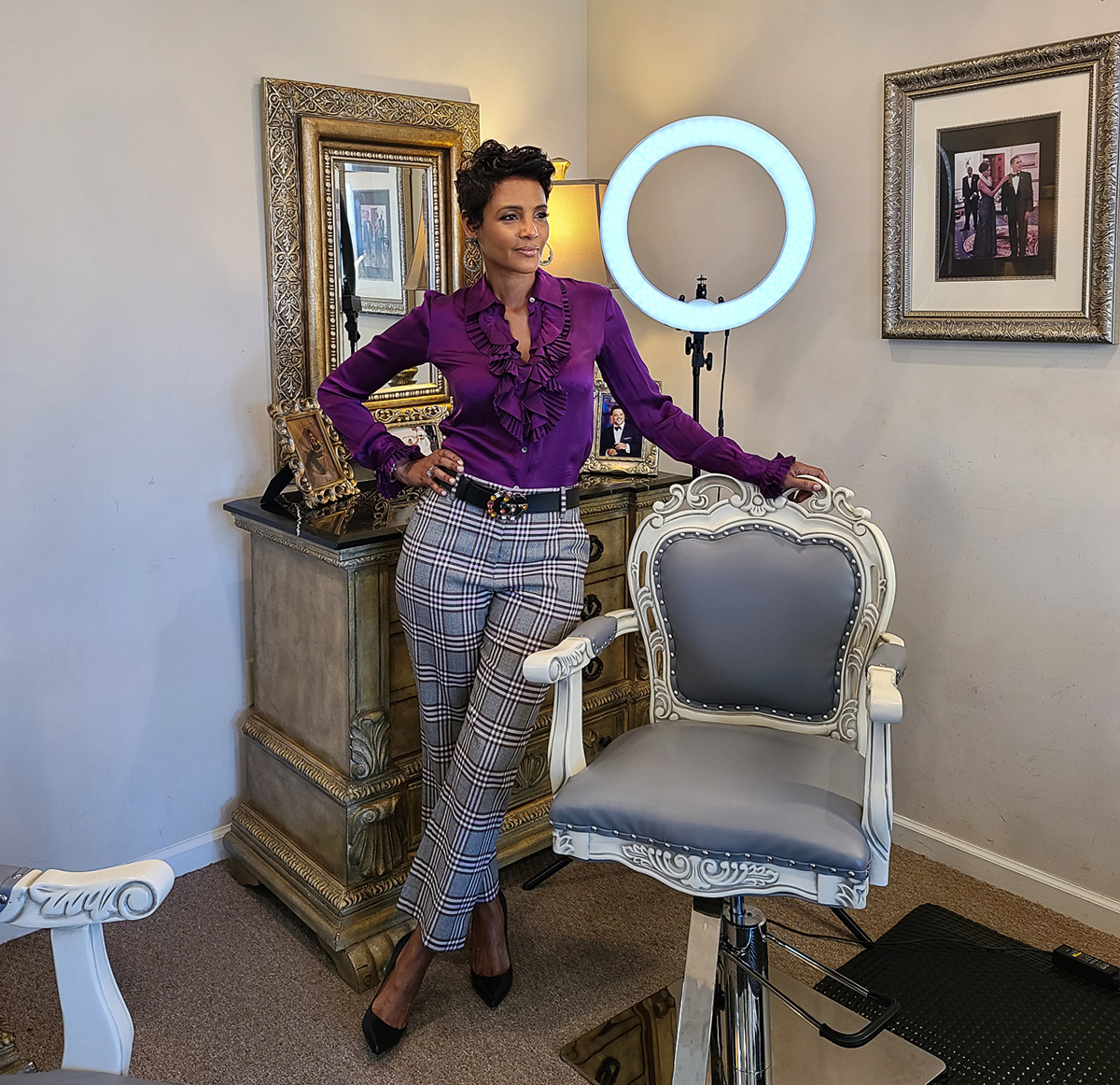 After readers finish her book, Jacqui Coles simply wants people to understand what God teaches. “Be holy for I am holy.” She urges her readers to develop the fruit of the spirit. This means living with love, joy, peace, patience, kindness, goodness, faithfulness, gentleness, and self-control. “Just treat people the way you would like to be treated,” Jacqui says simply. “When you are in a situation, run it through your mind and think about if you would like that comment being said to you or that act done to you. If the answer comes back no then you shouldn’t do it.”

Jacqui believes we should all strive for God’s definition of perfection. This means making a conscious effort to be the best person that we can be. “We can’t always say that we’re just going to make mistakes,” she says. “Yeah, we’re going to make mistakes, but we can’t keep making the same mistakes because at some point it is not a mistake as much as it is a conscious decision.”

Jacqui hopes young people will contribute positively to the world and have their voices heard. She says that first they must develop integrity. “Develop your integrity and your character early,” she advises. “The fruit of the spirit is not necessarily a religious thing, they are just principles. Life is based on principles. When we develop good principles, our lives will change for the better.”

At a time where citizens are protesting against police brutality, Jacqui Coles had to reread her book and reflect on what she wrote. “I had to ask God to guard my heart because it is natural to be angry. However, we have to be careful that the anger doesn’t turn into iniquity,” she says. “I asked Him to guard my heart and reflect back on myself through this process.” Jacqui believes without citizens risking their lives on the frontlines of the protests, we would not have any change. Jacqui believes her job is to research, understand, and give financially to those protestors and help rebuild some of the businesses that were lost in the unrest.

“Change for good and deliverance from evil is going to cost you something.”

She compares Jesus confronting the money changers in the Temple of Jerusalem and destroying their property with the present-day protests that have caused some occasional destruction. “You get tired of evil, so you have to stand up to evil,” she says. “I sent out a post, telling all of my friends that they cannot stay quiet.”

Jacqui looks to future generations and hopes those who are older will have a change of heart, specifically those who are against having grandkids or great-grandkids who are mixed. “You might be part of the problem if you have an issue with that,” she says. She hopes the religious community will give more than just prayers. “Prayer doesn’t cost us anything. Prayer is free. If you are going to pray, you need to add fasting or help financially or be on the front lines. Change for good and deliverance from evil is going to cost you something.”