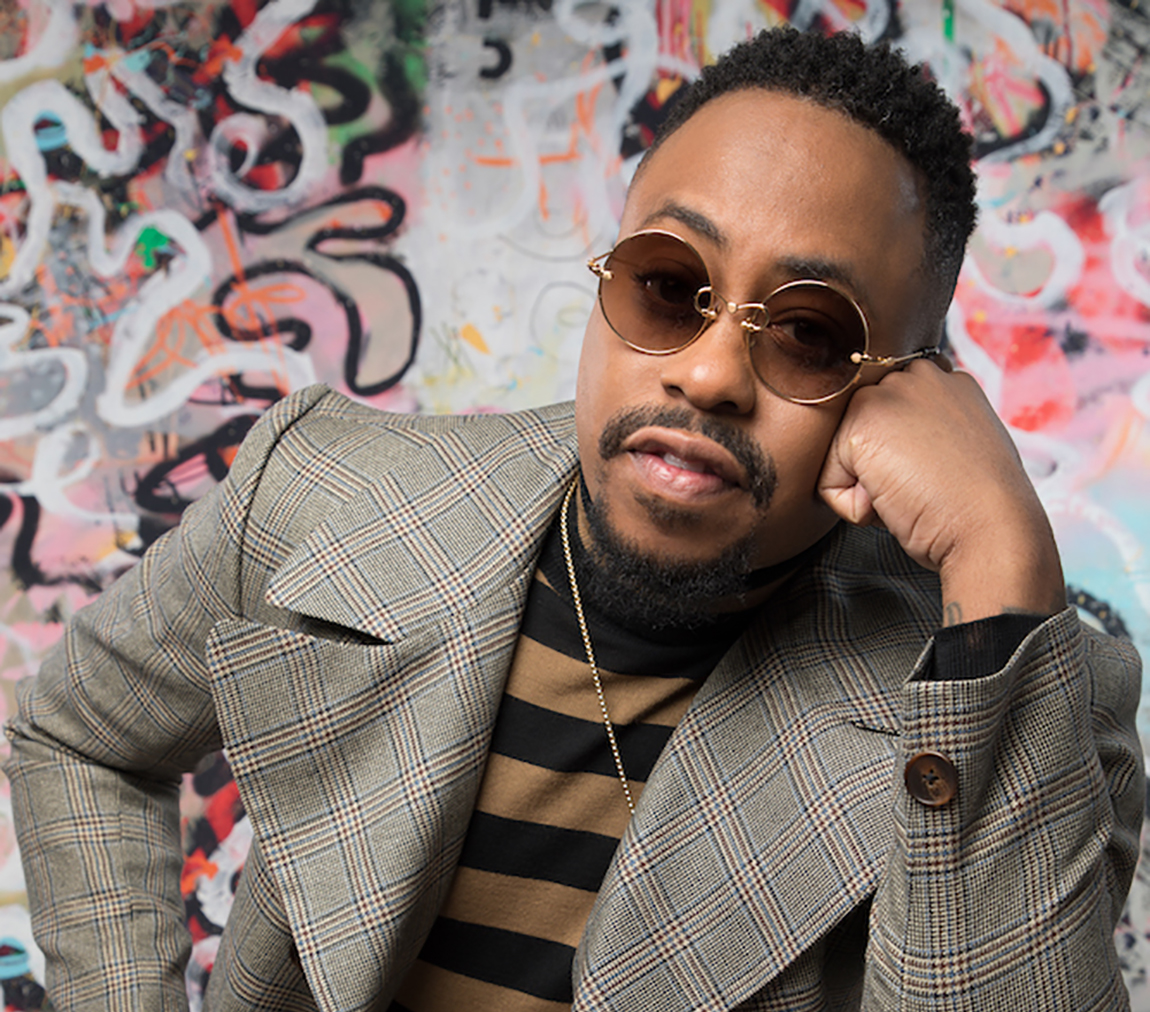 “Believe in yourself. Take every lesson and turn
it into a blessing.”

Raheem DeVaughn just wants to be the best man that he can be. The prolific R&B singer recently released his intimate sixth album, Decade of a Love King, a testimony to monogamy. DeVaughn is now in his 40s and has rearranged his priorities. He’s realizing his place in the world. He has new insights on life, romance and the importance of showing character in times where some men still refuse to be accountable for their actions, even in an age of “Me Too” and “Times Up.” We spoke with Raheem about his career and what he’s learned about himself at this point in his amazing career.

Where are you from and what was it like growing up there?

I was born in Orange, New Jersey, in what was formerly known as Orange Hospital. I grew up in the Maryland, DC, and Virginia metropolitan area or the “DMV” as we refer to it around here.

I would spend my summers in Newark, New Jersey with my Dad. When I was with my Dad, I saw the inner city and the effects of things like the crack epidemic. I saw a lot. My mom lived in a more suburban setting. It was total night and day. And even to this day, the difference from one setting to the other helped me tremendously in terms of balance. It’s one thing to be analytical or book smart and another to be street smart. My upbringing gave me an edge. I think people who get to experience both the city and the suburbs have an advantage. It gives you a better understanding of the haves and have nots and how to relate to everyone.

Coming up, who was your biggest musical inspiration?

I love all the greats: Stevie Wonder, Donny Hathaway, Sade, Bob Marley, and Earth, Wind & Fire; you name it. Great music is great music. But if I had to describe Raheem DeVaughn in a combination of three different entities, I’d say it would be a sprinkle of Prince, a dab of Marvin Gaye and two teaspoons of 2Pac.

That’s what’s up. In your early career phases, before you took off, were there any important lessons that you learned?

I’ll be honest with you, I’m still learning. I think life is a lesson. I think the profound lessons are the ones that change your life forever. I used to wonder what it would be like to be in my 40s and how great it might be. I feel like as you mature in the business, you start to come into your own. I’m definitely in that state. I think making “food music” has taught me patience, humility and forgiveness. It’s taught me the purpose of and the gift of time; the gift of one another, and the gift of decision making and how important those things are in shaping and growing the man I am becoming.

Well, tell me this: At what point in your career did you think that you made it?

I can’t say that I’ve made it yet. As crazy as that sounds, I feel there’s so much more in store for me and that once you tap into your greatness and understand the keys of life, that’s when things begin to open up. So, I’m starting to see opportunities manifest and I understand how to move certain things my way. Everything isn’t for me and every dollar isn’t a good dollar.

I can tell you one aspect where I feel I have made it. I realized, I won’t just be held accountable for what I did on stage but also what I did off stage. That’s where the humanitarian in me comes in. I started the LoveLife Foundation, a non-profit organization to help people. Who I am matters in the sense that when I pick up the phone or go on social media and make something happen, it is for somebody other than myself.

You see, the homeless man that I gave $20.00 to, he doesn’t care who I am. He just knows that the twenty might be his next meal or place to stay. There’s an old saying: ‘You don’t know when you’re entertaining an angel.’

What I hear you saying is that your voice has become a vessel?

Yes. It’s way bigger than singing the panties off of women. I have the power to help other people without picking up a microphone, without parting my mouth to sing a line. It’s how people have come to respect me. Having integrity is a lane that I have created for myself. It’s important.

Throughout the years, you’ve done a lot of collaborations. Have there been any favorite artists that you’ve collaborated with?

It would definitely be The Roots. That’s probably my biggest accomplishment. I’m a huge Roots fan and I would love to do an entire album with them at some point. That is something I’m extremely proud of—the work that I’ve done with them. Of course, I am proud of all of the work that I’ve done. It’s a very vast catalog, from the Roots to Boney James to UGK to Usher to Jamie Foxx, and some obscure collabs. Last night, I did some features for some boys down in Richmond, Virginia who just got talent so we vibed.  Again, it’s about lifting people up and assisting one another.

Your last project, Decade of a Love King, was about being faithful, loving and giving and receiving. Why was this message so important to get out to the public?

At this point in my life, I believe in transparency. I’ve been very vocal in the last few months about celebrating the relationship that I’m in. Having that awakening and understanding of what monogamy is about is driving me.

Life partners are gifts that come from the Universe and God. They are tailor made for you. I believe your blessings flow depending on whether or not you abuse them or appreciate them. It’s so important for me to put that message out there.

I can help men who have been where I’ve been. I want to expose the detrimental effects of womanizing and lack of self love and abusing yourself and spreading yourself too thin. At the end of the day, nobody would rather be at their lowest low when they could choose their highest high.

I like that.  Man, you are always working!  When you’re not working, what do you do to relax?

I’m still trying to learn that. I love to be with the fam, kick it with my lady and kick it with my kids. I try to get in there with my parents ‘cause they’re getting older—just valuing things differently. I used to think everything came after music. Now, it’s a different list of priorities for me. It’s God, faith, my family and then music. This order allows me to put everything into perspective. My work takes a lot of my time, but I appreciate those other things a lot more. I wouldn’t be able to do any of this without God.

Consider for example, my day ended at 6 a.m. this morning. I was back up at 8:30 a.m, and then took a nice nap in the car service on my way to a reading in New York. I’m headed back to the crib tonight. I may get to the studio for a minute and then tomorrow, I fly to Houston for a show. It doesn’t stop. You’d be surprised at what you can do when you put your mind to it. I try to find some time to recharge my battery ’cause I’m not a spring chicken anymore.

My philosophy: When I leave here, I’m going to leave empty. Not to say we don’t sleep, but we leave here empty because we put that work in and build that legacy.

What advice would you give to the next generation of singers/artists who want to have a successful career in the music industry?

Believe in yourself. Understand early in the process that the gift of time is yours to claim. The gift of decision is yours to make and use wisely. And the gift of relationships and people will put you in rooms that you never thought you would be allowed to be in. You must be prepared when you get your shot.

God and the Universe do not give you anything until you are deserving of it. If you want to make God laugh, make your own plans. Listen for the voice of discernment. Believe in yourself. Take every lesson and turn it into a blessing.

Failure is imminent. It’s going to happen. Failure breeds success. You can’t be successful without taking some Ls (losses). And be prepared to hear a lot of no’s. The most successful people are those who are determined to change those no’s into bonafide yes’s.

In the business that we’re in—music, television, and film—and as public figures, few people want to be first. Nobody wants to be that first person who that has someone come up to them and say, “You told me this was going to work and it didn’t.” Some of those may end up out of a job. So everyone wants to be second (or follow) ‘cause it seems easier to be that cheerleader on the sideline, saying “Man, I told everyone that you would make it! Now, let’s go spend all of your money!”

Just be mindful of those things. There is no “I” in the word team. Everything has its point in time. You can’t rush perfection. You can’t rush the creative process. Take risks and be smart about it. Be the first to believe in you.

That’s real talk and great advice. What’s up next for Raheem DeVaughn?

I’m part of this great film called Love Dot Com. I just signed on for a couple of other projects that I cannot talk about just yet. I started a new company, DeVaughn Multimedia Group, which will allow me to do other work besides music. Additionally, moving forward, I’ll own my masters so my art will be owned by me. I’m proud of that. It will allow me to jump into the world of television and film with more to offer.

I’ve also been inspired to work on some self-help books. I think I’m a walking testimony for a lot of different reasons. This makes me to share my story in the hopes that it helps people, particularly black men—young and middle-aged—in crisis who are trying to figure it out.

Previous Post HistoryMakers: African American Voices from the Past to Present
Next Post Robbie Celeste Is Out of This World