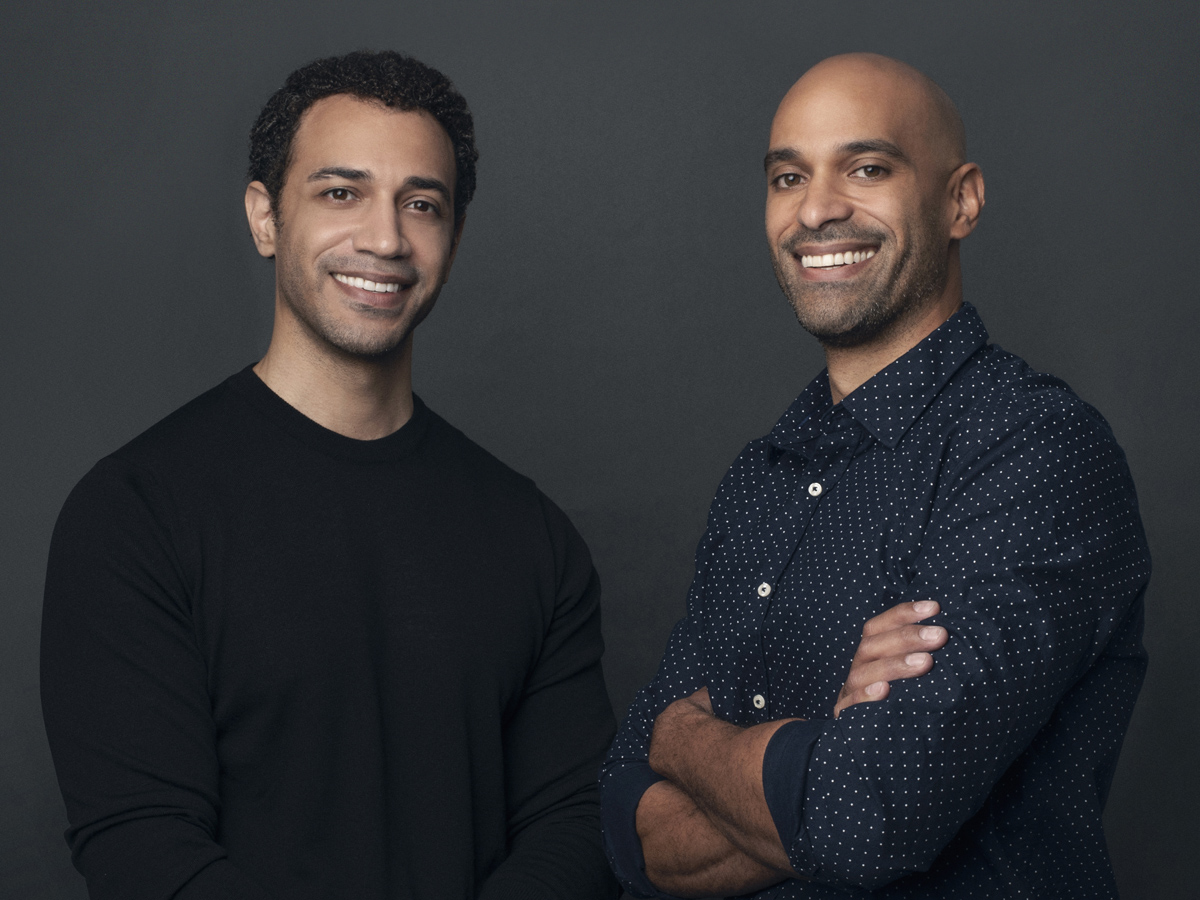 Brothers Mike and Josh Grier are the co-founders of Ember Lab, an independent animation, digital, and gaming studio. Photo by Luke Fontana.

“Find what speaks to you.”

It was June 11, 2020, and Sony would be showcasing their lineup for the PlayStation 5. At the 27 minute mark, two new faces appear on the screen. They were the faces of brothers Mike and Josh Grier, co-founders of Ember Lab, an independent animation, digital, and gaming studio. They were there to introduce the world to Kena: Bridge of Spirits, a new gaming platform for the console. It was surreal seeing themselves in the showcase. It surprised their family and friends too. “My phone blew up with messages from people I hadn’t talked to in a while like, ‘I saw you on the PlayStation 5 showcase,’” Josh explains. “Most people didn’t know we were working on Kena, but no one was expecting our faces to be up there.” 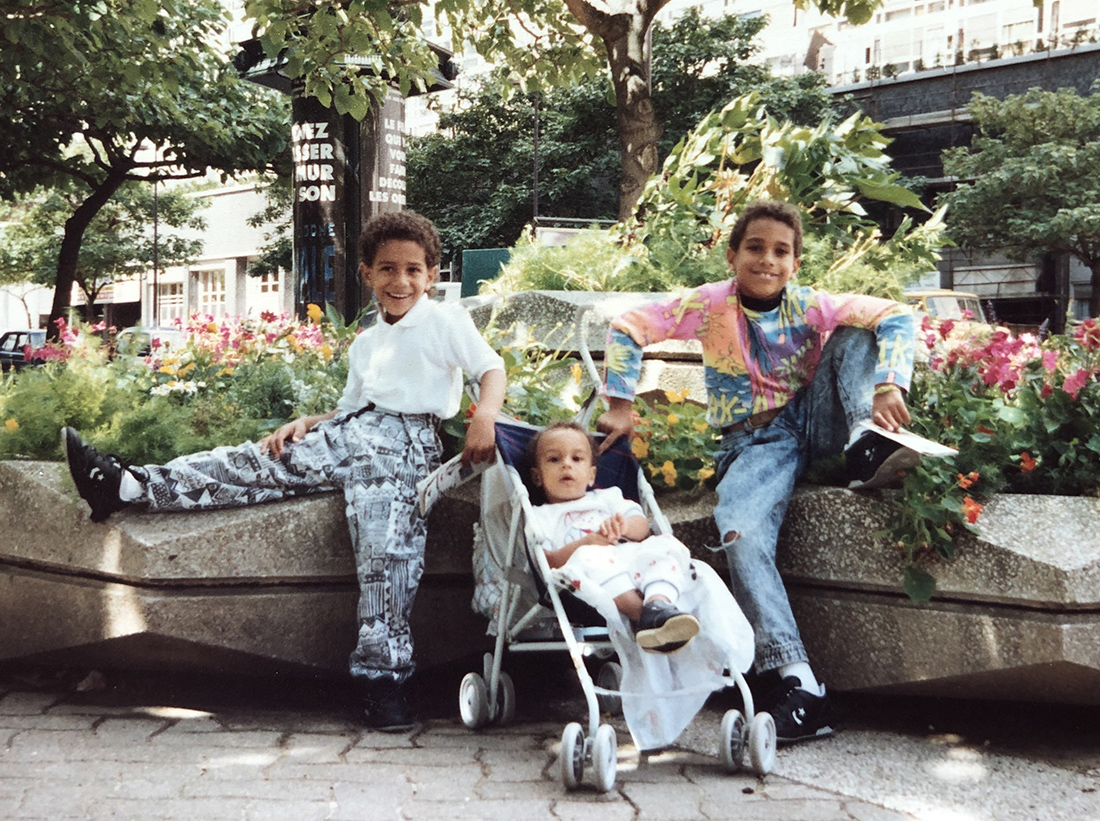 Childhood photo of Josh and Mike Grier with their little brother Daniel in Paris. From left: Mike, Daniel, and Josh Grier. Photo courtesy of Ember Lab.

Back in the 90s, Orlando, Florida, wasn’t quite as densely populated as it is today. Mike recalls when they would play around in the woods around their neighborhood and shoot hoops in their yard. They lived around dirt roads and meadows. They were surrounded by magic and wonder. Their dad was an executive for Disney’s theme-park operations. “Our dad worked for Disney for a long time and worked his way up into management over the years,” Mike says. “We got a sneak peek of how the parks were operated and what was possible when you had the right team.”

When Josh was six and Mike was four, their family moved to Paris, France, for 18 months. Their dad was tasked with opening Euro Disney. It was during this time that the two brothers bonded over shared experiences. “Oftentimes, we didn’t speak the language, so a lot of that bonding involved watching animated films and playing video games, like the old classic Zelda game from Nintendo,” Josh says. These games and the experience of living abroad influenced the kind of naturalistic and environmental elements found in their work. “Everything we do has a lot of texture,” Josh says. “We create fantastical characters, but we try to give them a realistic spin, whether that is in lighting or the art style.”

“I hope people connect with the story and the themes of the game as much as the gameplay,” Mike says

In the 2000s, their father would become vice president of Tokyo Disney. During this time, Josh was studying business and economics at Northwestern and Mike was still in high school. This was years before he would go on to study film at Chapman University. The family lived in Tokyo, Japan, for three years. Living in Tokyo sparked Mike’s creativity and influenced the creative choices behind Kena: Bridge of Spirits. Kena was in development long before it was revealed at Sony’s PlayStation 5 showcase. Josh and Mike founded Ember Lab in 2009. Josh is the chief operating officer and Mike is the chief creative officer. The team at Ember Lab cut their teeth creating ad campaigns for the MLB, Coca-Cola, and KFC. These ads illustrated Ember Lab’s ability to create beautifully rendered animated ads for a global audience. But their greatest success story came in the form of a short animated film, Majora’s Mask – Terrible Fate, that paid homage to the classic Zelda games. It went viral. As of this writing, it has over 10 million views on YouTube. So when it came to pitching to companies, Ember Lab was at an advantage. Sony was among a list of companies that fell in love with what the team was doing. They partnered with Sony in October of 2017. “We started development on the PlayStation 4 platform and they gave us the opportunity to jump to PlayStation 5,” Josh says. “They are pretty committed and passionate about fostering creative teams like ours who are doing this kind of work.” 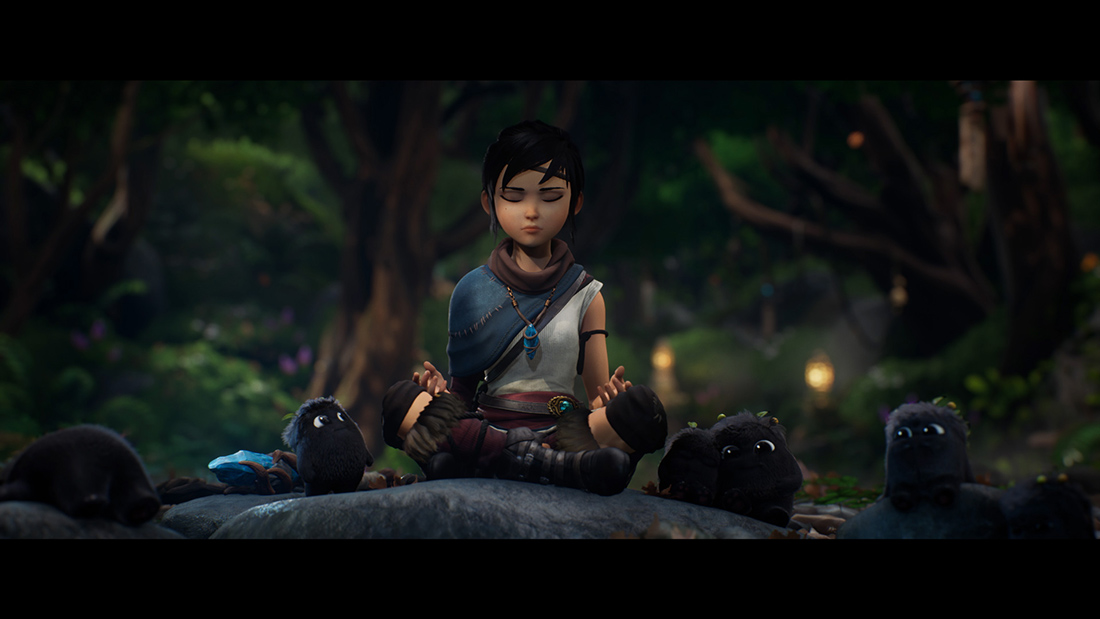 Kena takes a moment to meditate in the forest to increase her focus and power. Photo courtesy of Ember Lab.

The main character in their game is Kena, a young spirit guide, who travels to an abandoned village to find a sacred mountain shrine. She is aided in her quest by spirits and adorable black creatures known as the Rot. The Rot assists Kena in battle, platforming, and other actions that are required for players to progress through the game. The Rot are with Kena until the end. The game’s Asian female protagonist was an easy choice for Ember Lab. “Diversity is natural for us,” Josh explains. “We have always planned for a unique lead character that gamers haven’t seen before. We try to be authentic no matter what we do.” Mike adds that the storytelling is relatable. “The storytelling themes and the human connection and narrative are universal,” Mike says. “It deals with people struggling with loss or struggling with a mistake they made and the desire to reconcile it. I hope people connect with the story and the themes of the game as much as the gameplay.” Mike hopes that the game will create the same strong bond that he and his brother had when playing games. “It was a way for us to connect as siblings and I think part of the goal of making this game is to supply that sort of connection,” Mike says.

“I think a lot of people in our community have the potential but don’t have the access or the exposure of knowing someone who is in the industry,” Josh says.

With the buzz surrounding Ember Lab’s new game, Mike and Josh are dealing with the growing pains of operating a bigger company. Despite this, they operate Ember Lab like a family. “As you become bigger, collaboration and effective communication become even more important,” Josh says. “Building a team unit and an atmosphere where everyone feels they can communicate effectively and have their voice heard was important to us.”

In a moment of vulnerability, Mike says he struggles with what many creatives struggle with: he second-guesses himself more than he should. “I find that it is best to follow my gut and do what I think is good and true,” he says. As the Ember Lab team grew, Mike says it was a challenge to articulate those creative ideas and get everyone on the same page. “As a creative director, it is just a matter of listening to your team and then making the best decision,” he says. 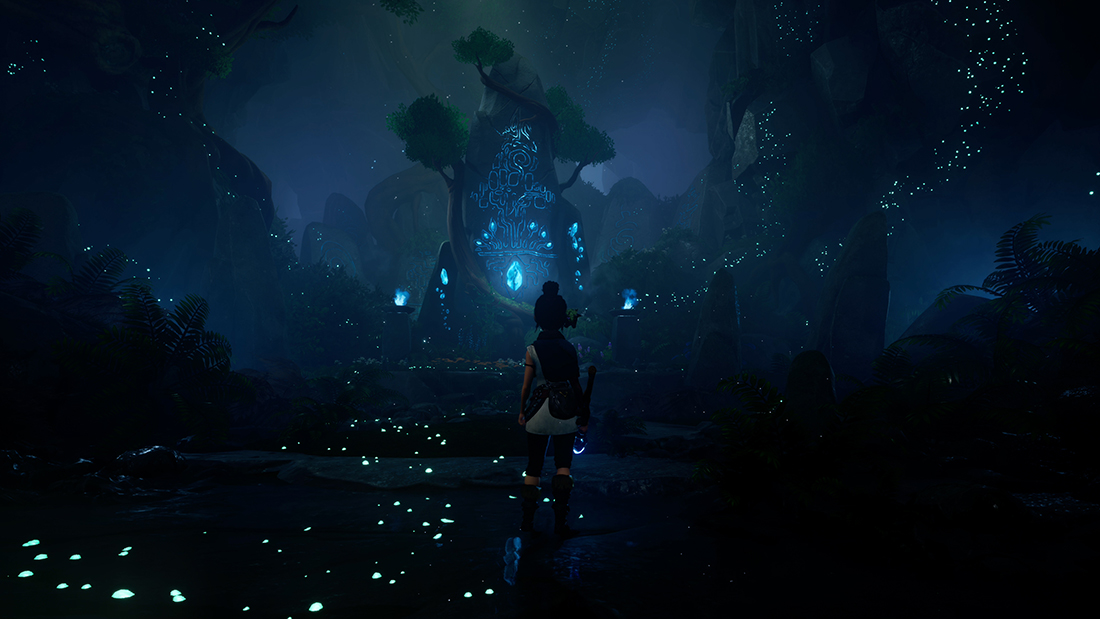 Kena approaches an activated shrine deep inside a cave. The glowing carvings on the rock depict an ancient wisdom lost to time. Photo courtesy of Ember Lab.

Because they grew up with a father who was in the creative industry, the two brothers went into the industry with their heads held high. “We talked about it before, but for us, a lot of what we have gotten is based on opportunity, and seeing people like us in positions that we aspire to is critical,” Josh says. However, it was a little surprising to see that there were only a handful of people who looked like them in gaming design. They want this to change. “I think a lot of people in our community have the potential but don’t have the access or the exposure of knowing someone who is in the industry,” Josh says. Mike adds that they have inspired those closest to them to the possibility of working within the gaming industry. “When we talk to our cousins, it is like wow. They didn’t think it was a possibility before,” he explains. “They didn’t think this is a career path that they could take.”

For those who would like to tap into the industry, Josh suggests keeping yourself busy with projects of your own. “Even if there is no budget, getting our hands dirty and getting in there and learning the tools through a project is something that we have found has helped us,” Josh says. “That struggle of learning the tools on your own makes you strong when those doors are opened to you.” He also advises those interested in game building and design to make connections within the industry. “Talking to someone about their experience is just really valuable,” he says. “We get people reaching out to us all the time and while we may not always be able to give everybody what they want, we always try to respond and give as much feedback as possible. Don’t feel afraid to reach out and ask people for help,” Mike adds that talking to community managers on social media is a path to build that connection. “It is a bit of a tough nut to crack,” Mike admits. “But I would say there are so many avenues and different skill sets involved in making games. Find what speaks to you.” 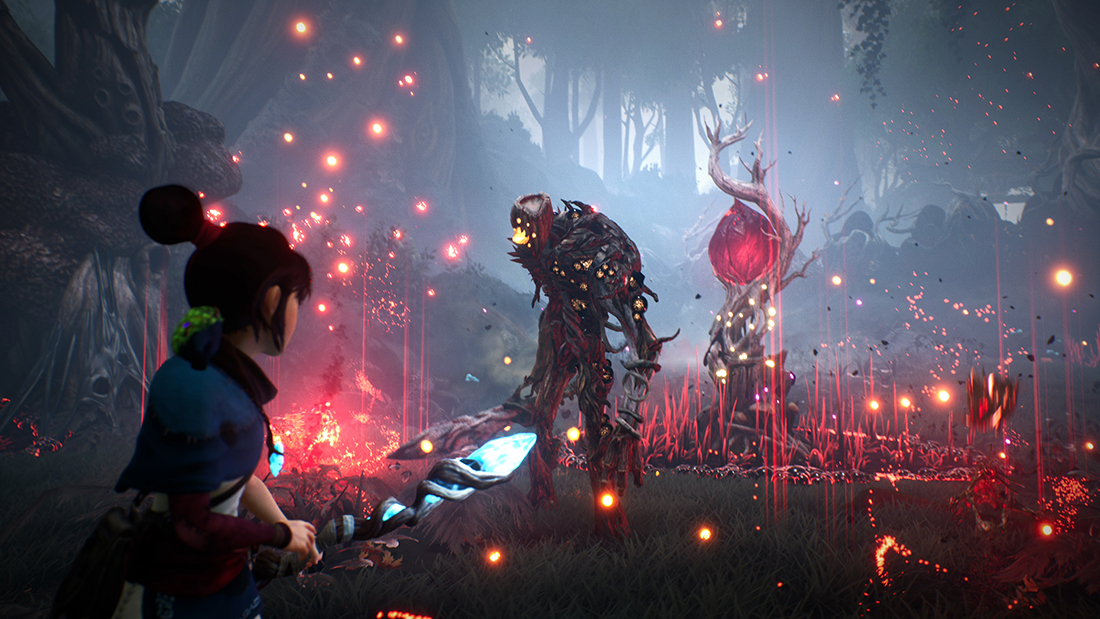 Kena faces off against a tough enemy before she can cleanse a corrupted sprout. Photo courtesy of Ember Lab.

While their primary focus is Kena, Josh says they will hold off on a sequel. “I don’t know if we will do a direct sequel next,” Josh says. “It may be another IP, in the same style—in terms of gameplay and the story-driven experience.” However, the duo is interested in exploring the world they created in Kena in different creative mediums. “Kena and the universe we built has a lot of storytelling potential,” he says. “So exploring and taking it into a more linear experience like a TV show or film is a possibility.” 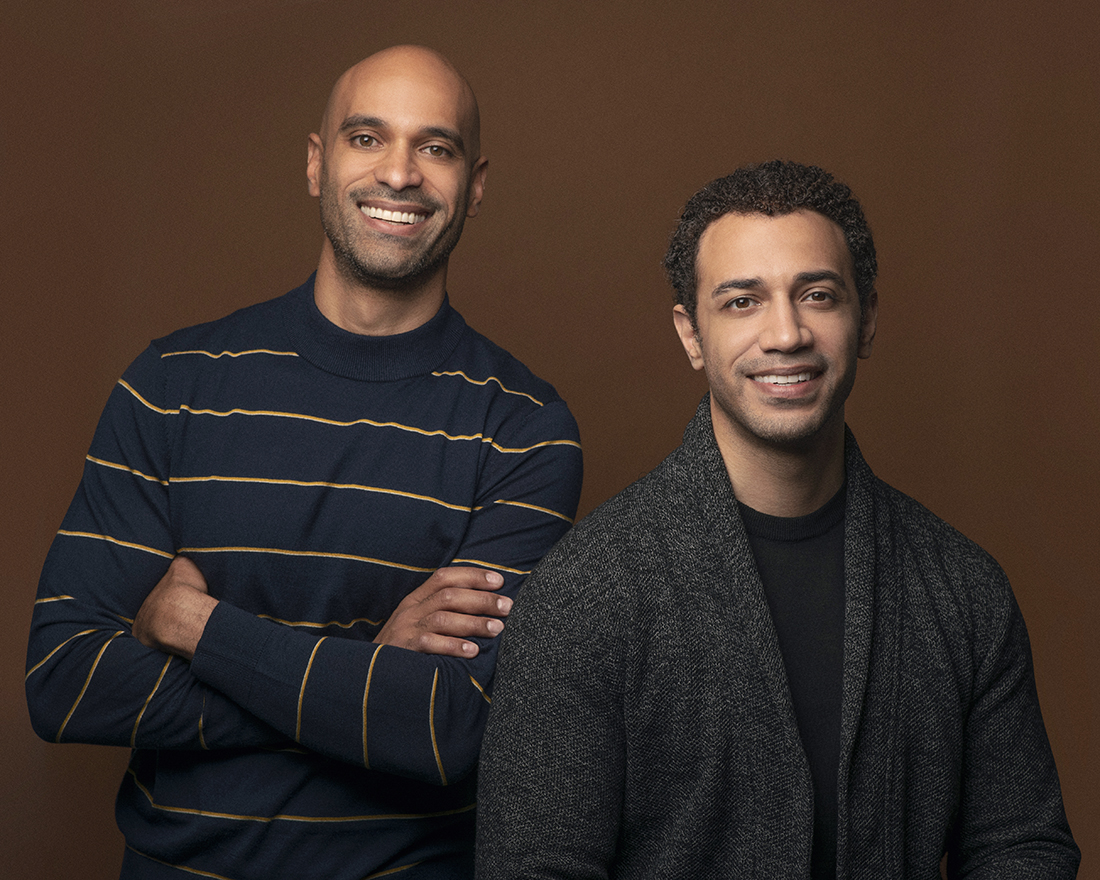